On ne voit bien qu’avec le cœur. L’essentiel est invisible pour les yeux. (“One sees clearly only with the heart. What is essential is invisible to the eye.”)

April 18, 2022: Published in 1943, Antoine de Saint-Exupéry’s The Little Prince is a tender and original classic in written form. The story appears at first glance to be meant for children, but addresses loneliness, friendship, love, and loss in such wise, universal fashion, it’s been translated into over 300 languages, gifted by those of all ages. At least two films, an opera and a musical interpretation precede this “iteration.” 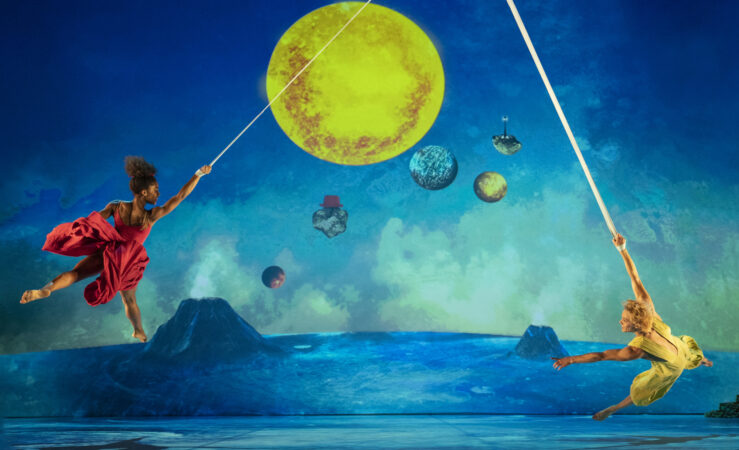 On ne voit bien qu’avec le cœur. L’essentiel est invisible pour les yeux. (“One sees clearly only with the heart. What is essential is invisible to the eye.”)

April 18, 2022: Published in 1943, Antoine de Saint-Exupéry’s The Little Prince is a tender and original classic in written form. The story appears at first glance to be meant for children, but addresses loneliness, friendship, love, and loss in such wise, universal fashion, it’s been translated into over 300 languages, gifted by those of all ages. At least two films, an opera and a musical interpretation precede this “iteration.”

If, like my companion, you haven’t read the book (you’ve missed something!), you’ll find the piece visually, musically, and choreographically rich, but utterly confusing. If you’ve always held it dear, evocative parentheses are not enough to make up for eviscerating its heart. Once again estate greed has won over integrity of source. This is all the more frustrating as much is fixable.

The original Little Prince begins with a preface that distinguishes grown-ups from children based on imagination, an important premise completely neglected by this production. Based on Saint-Exupéry’s WWII flying experience, an aviator (Aurelien Bednarek), crashes into the Sahara with only eight days to repair his plane before water runs out. He’s approached by an angelic looking, ingenuous blonde boy he calls the little prince. (Lionel Zalachas – moves like a dream, priceless expression.)

The role of narrator here is played by librettist and co-director Chris Mouron, who additionally voices every character and nonverbally sings. The voice is fine, songs innocuous. As a strong French accent pervades, super titles appear on screens at either side of the stage.

When the prince asks, “draw me a sheep,” it’s curiously the narrator not the aviator who takes up a pencil. We see the rudimentary art appear on screen line by line. Dancers whimsically costumed as sheep gambol across the stage. After several rejections, a box with air holes is submitted. The boy is delighted. At no point does the script reveal he needs a sheep at home to eat undesirable plants.

Over time, the prince tells the aviator his story. There’s not a single sentence indicating he does so. Suddenly we’re on the boy’s small home planet with encroaching Baobob Trees (a succulent that stores water in its trunk), three volcanoes he rakes out every day (two active, one dormant), and a narcissistic, demanding rose (Laurisse Sulty – a simply beautiful dancer) who has no such personality here.

Hitching a ride with migrating birds (expertly on aerial straps which are fun but over employed throughout), the Little Prince visits six other planets, each occupied by a single, delusional character who embodies negative traits of human nature: a king oblivious to the fact he has no subjects (Joan Bertrand), a vain man without audience (Antony Cesar), a drunkard (Marie Menuge), a businessman (Adrien Picaut) counting the stars which he thinks he owns having thought of it first, a lamplighter (Marcin Janiak), and an elderly geographer omitted here. All are talented acrobat/dancers. End Act I

The Little Prince lands on earth in the Sahara Desert and assumes at first the planet is uninhabited. He encounters a (fatal) yellow python (Srilta Ray). Unfortunately, this costume is both red and decidedly un-reptile-like. My companion had not a clue what the creature was. The snake claims to be able to send the boy home should he so desire. True nature of the offer is not clear. A field of roses diminishes the uniqueness of his own flower. The Little Prince cries. Not here. In general, every touching moment, every emotional lesson has been ignored.

A fox comes by requesting to be tamed. (An excellent Dylan Barone – great costume, splendid choreography.) To be tamed, he explains, is to become unique and valued, though sadness may ensue when parting. The lesson tracks back to the prince’s rose. Not in this version.

On the eighth day, exhausted and dehydrated, the aviator and the boy go looking for a well. (Here it rains.) The Little Prince is concerned about his rose fending for herself. He walks off resolved to find the snake. When the aviator discovers his body, it seems as if he’s died. It was only, the book says, that the body was too heavy to take home. In the morning, the corpse is gone.

A field of roses – the company

Here, we see him lifted up by a suspended ring, arms draped over it Christ-like. Having died? Returning home? Neither choice nor method was clear. The book leaves interpretation to each reader, while the aviator puts out a call to be alerted should anyone in the area meet a boy of the prince’s description.

I hope this makes you want to read the book. As to the show, it’s spectacle without heart misrepresenting an immensely sage and moving story. There’s much to appreciate, but without a better script, only bewilderment remains. A pity.

Marie Jumelin’s surrealist/contemporary Magritte-like video is highly original and in keeping with the production attitude; some is quite wonderful.

One might say the same for Peggy Housett’s extremely clever costumes. Lighting by Stephane Fritsch and sound by Tristan Viscogliosi are top notch.