By: David Sheward
Could there be a more appropriate historical moment to mount a new adaptation of Corneille’s comedy The Liar? As our newly-elected president and his spokespeople substitute “alternative facts” for truth, Classic Stage Company presents David Ives’ intricate semi-updating of the hilarious tale of Dorante, an epic braggart exaggerating and fabricating his way through romantic entanglements in 17th century Paris. He’s accurately described as “a lying genius, if a moral zero” (sound familiar?) This is Ives’ third foray into refashioning French theatrical meringues. He has previously adapted Moliere’s The Misanthrope (as The School for Lies) and Regnard’s The Heir Apparent, both of which have played CSC. 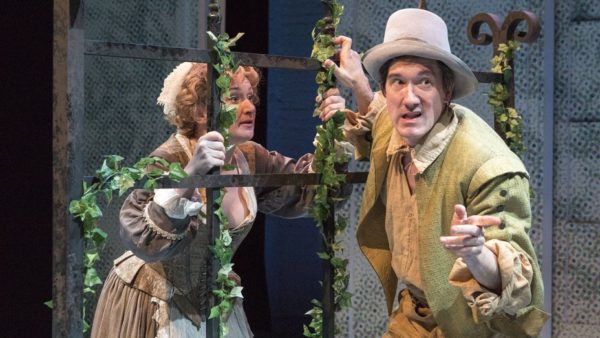 Could there be a more appropriate historical moment to mount a new adaptation of Corneille’s comedy The Liar? As our newly-elected president and his spokespeople substitute “alternative facts” for truth, Classic Stage Company presents David Ives’ intricate semi-updating of the hilarious tale of Dorante, an epic braggart exaggerating and fabricating his way through romantic entanglements in 17th century Paris. He’s accurately described as “a lying genius, if a moral zero” (sound familiar?) This is Ives’ third foray into refashioning French theatrical meringues. He has previously adapted Moliere’s The Misanthrope (as The School for Lies) and Regnard’s The Heir Apparent, both of which have played CSC.

This latest fluffy dessert is delicious and full of lighter-than-air rhymes. Did I mention the script is all in verse? The catchier ones include “experience” and “Presbyeterians”; “moister” and “oyster”; and “bivalve” and “my valve.” There are a sprinkling of anachronisms but they do not distract. Michael Kahn who commissioned the new version for the Shakespeare Theatre Company in Washington, DC where he is artistic director, maintains a light-footed pacing throughout.

Though Dorante is the title character and Christian Conn makes him a dashing rogue, the real star of the evening is Carson Elrod as Dorante’s sad-sack servant Cliton. While his master cannot tell the truth, Cliton suffers from the opposite malady—he finds it impossible to lie. (Add an “n” to his name and you get another victim of a huge prevaricator, adding a layer to the relevant political subtext.) Elrod is a masterful clown, expertly prattling and mugging, but never going over the top. The highlight of the show is a lesson in falsifying by Dorante to his honest-to-a-fault valet. As Conn elegantly demonstrates the necessary gestures and looks to lend verisimilitude to whoppers, Elrod gives Cliton’s awkward attempts to be appear smooth a riotous reality. Then the servant tries out his new fibbing skills on Isabelle (Kelly Hutchinson), the pretty maid he’s been after and receives a slap for his pains.

Hutchinson comes in a close second behind Elrod in the comic sweepstakes. She has a slight advantage over her fellow players since she plays not only the flirtatious Isabelle, but her twin sister the scolding sadomasochist Sabine. Also worthy of mention are Adam Lefevre as Dorante’s befuddled father and Ismenia Mendes and Amelia Pedlow as the two young ladies caught in the hero’s lies.

At the other end of the theatrical spectrum, British playwright Anna Jordan’s Yen offers a searing, sordid portrait of alienated youth in a ripping production by Trip Cullman from the MCC Theatre. At first glance, this piercing drama seems like a great many other works about lost boys behaving badly such Orphans, This Is Our Youth, and Saved. In Mark Wendland’s spare box set with peeling wall paper and drab lighting (designed with appropriate moodiness by Ben Stanton), we find teenager half-brothers Hench and Bobbie watching porn and playing video games while their alcoholic, diabetic mother Maggie drops in occasionally for cigarettes, money, and food. The kids’ only regular companion is their German shepherd Taliban (so called because “He’s vicious and he’s brown,” Bobbie explains.) Into this dysfunctional melange comes neighbor Jennifer who at first only wants to care for the neglected canine, but gradually takes on the role of girlfriend for Hench and mother to Bobbie. Predictably a misunderstanding leads to tragedy, but the writing is so realistic and the acting and direction so sharp, this familiar story still has a walloping impact.

Oscar nominee Lucas Hedges (Manchester by the Sea) and Stefania LaVie Owen (The Carrie Diaries) feelingly convey Hench and Jenny’s tentative attractions and damaged psyches. Ari Graynor is brilliantly brittle as the out-of-control Maggie. The uniquely named Justice Smith gives a stand-out performance as the feral Bobbie. Violently leaping around the stage one moment, barking like a dog the next, Smith captures Bobbie’s almost animal-like need for attention and his hair-triggger code switching from lonely child to violent aggressor.

In other stage adventures, I managed to catch up with the Broadway edition of Natasha, Pierre, and the Great Comet of 1812. I was scheduled to see Dave Malloy’s techno-pop-rock musical version of a slice of Tolstoy’s epic War and Peace when it opened last November, but star Josh Groban was out that night and the next available performance was not until recently. There have been three previous Off-Broadway incarnations in 2012 and 2013. When I attended the second of these at a site-specific tent called Kazino in the meatpacking district, director Rachel Chavkin’s immersive experience was so involving, I felt as if I were in the room with the characters. In transferring to the much larger Imperial Theater, set designer Mimi Lien has done her best to recreate the atmosphere of a Russian dinner club, but the experience is much less intimate. Maybe those seated on the stage feel close to the Rostovs, Bolkonskys, Kuragins, and Bezukhovs as they wrestle with passions and loyalties, but from the orchestra seats, I felt removed from their machinations. The musical’s delicate closing moments brought me to tears Off-Broadway, but here I just admired the stagecraft.

As Pierre, Groban exhibits a magnificent voice, but lacks the depth to fully inhabit  the role. Denee Benton’s Natasha is charming and bubbly yet when her liaison with Anatole is shattered, she fails to move us. Original cast members Lucas Steele as the caddish Anatole, Amber Gray as his licentious sister Helene, and Grace McLean as the overbearing aunt Marya have blown up their parts to fill to larger space. Only Brittan Ashford as Natasha’s cousin and confidante Sonya maintains the heartbreaking pathos she achieved Off-Broadway, particularly in her shattering solo. In this roundup, Off-Broadway scores the higher points while Broadway only has higher prices.