THIS is Great Theater

“We are merchants of money. We use money to make more money.”

October 21, 2021: The remarkable Lehman Trilogy comes to Broadway by way of London’s National Theatre, the Park Avenue Armory, and London’s West End. I saw it at the Armory. Adrian Lester has replaced Ben Miles; scale has been adjusted. At  three hours, 20 minutes, with two intermissions, it remains as fully captivating as it was upon first viewing. GO. 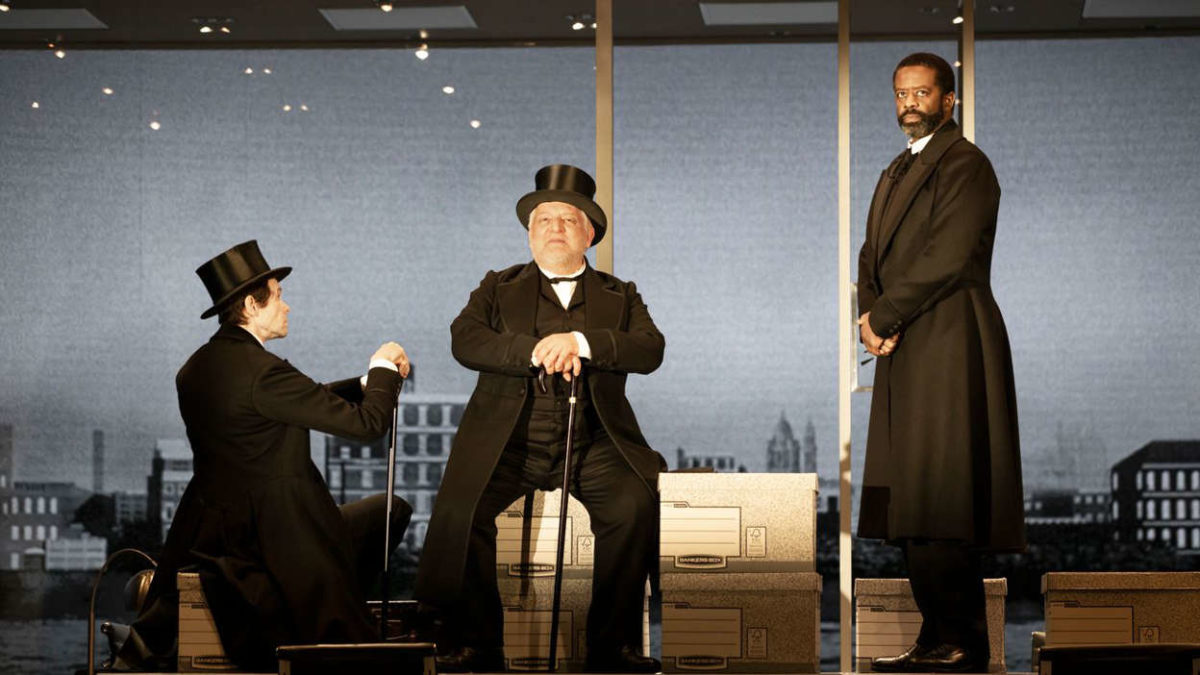 THIS is Great Theater

“We are merchants of money. We use money to make more money.”

October 21, 2021: The remarkable Lehman Trilogy comes to Broadway by way of London’s National Theatre, the Park Avenue Armory, and London’s West End. I saw it at the Armory. Adrian Lester has replaced Ben Miles; scale has been adjusted. At  three hours, 20 minutes, with two intermissions, it remains as fully captivating as it was upon first viewing. GO.

This is the story of a dynasty, of 160 years of American Capitalism, innovation powered by hubris as much as insight and, in this case, resulting erosion of (Jewish) ritual. Through the Lehman Brothers, their relationships and businesses, playwright Stefano Massini and Adapter Ben Power, show a vast panorama of psychological and social change without losing intimacy. A story of people, not numbers. The three “acts” are: Part One: Three Brothers, Part Two: Fathers and Sons, Part Three: The Immortal.

Hayum had been dreaming of America…Henry Lehman – the name change made things easier (Simon Russell Beale) – stepped off the ship in New York after one and a half months at sea wearing his best shoes. Baruch Hashem (Thank God.) It was 1844. Lehman was the son of a Jewish cattle rancher in southern Germany. He boarded a teetotaler and disembarked “a champion drinker,” learned to gamble, and thought he understood the world.

Henry (who was always “right”) spent his first year peddling a wagon of merchandise up and down the river. In his second, he set up a small dry goods shop in Montgomery, Alabama called H. Lehman. Followed by middle brother Emanuel (Adrian Lester), he changed the store sign to H. Lehman & Brother, and upon the arrival of 20 year-old Mayer (Adam Godley), to Lehman Brothers. At the start, the men made $2.75 a day. It would be three years before debts were paid. Every morning the siblings prayed.

From selling fabric to farm equipment (added by ready credit from fellow German Jewish suppliers in New Orleans), to brokering cotton, becoming “middle men,” the trio solidified position and expanded. After The Civil War, they loaned money to devastated plantation owners in exchange for goods. Henry died. The shop was closed for the first time in ten years as the siblings sat Shiva.

Mayer married a local and settled in. Emanuel went to New York. He observed that eight wagons of cotton yielded 90 yards of fabric. If they had 1,000 wagons…! In 1858, after 18 courting visits (wryly manifest), he married well, accrued buyers, and set up a branch of the newly formed Lehman Brothers Bank in Manhattan. The institution was earning $50,000 a year. By 1870, the Lehmans took the lead in establishing the New York Cotton Exchange, the first commodities futures trading venture.

Beale, Lester, and Godley fluently inhabit dozens of roles including wives (whose characters are distinctive) and children through body language and speech patterns. Expressions and voices are priceless. Beale in particular is a theater treasure, seeming to morph before our eyes with Godley a close second. Lester takes a while to get into groove and never quite measures up. We always know who the actors represent.

Emanuel had nightmares of an out of control train, so wouldn’t touch railroad investments. Both Mayer and Philip would suffer night terrors. His son Philip had other ideas including oil and tobacco. One day Philip decided to methodically “solve his marriage problem.” Qualifying list in hand, he did just that. (This is wryly portrayed.) “A talking machine,” he’s next to advance. Mayer’s son Herbert, in something of a hurry, would become governor, then senator of New York.

The next generation is represented by Philip’s son, Bobby, who liked race horses and women, and danced the twist. Thrown into the deep end despite hedonistic preferences, he developed Lehman Investment Corporation. Step by step we watch restructuring with the clarity of colored Lego Logs.

A black curtain slowly descends at the back. It’s October 1929, “The end of the world.” Dramatic consequences ensue. Banks failed, people are wiped out, suicides occurred. (Writing and staccato delivery here is particularly striking.) Bobby pulled them out, focusing on venture capital. A board of directors was established. When Emanuel died, Shiva only lasted three days. The company is now called Lehman Brothers Finance. Bobby would be the last Lehman involved with the firm.

Most music comes from a single, visible, stage floor piano played by Music Director Candida Caldicot. You won’t miss anything else. Intermittently enmeshed, it’s easy to stop hearing it as something separate.

From here, time compresses and speeds up. As I wrote in my first review, 15 more minutes to explain Lehman’s evolution and what lead up to the 2008 financial disaster that finally took them down after surviving two wars and The Depression, would be helpful. The unsustainable mortgage market was built on snake oil and greed. Government reaction is difficult to swallow.

Drama rides tandem with humor. Immigrant experience, importance of dreams and heritage, the family’s wider impact make dramatization sweeping. The play is comprehensible. One doesn’t need a financial background to understand and enjoy it.

In my opinion, this is the theatrical highlight of Director Sam Mendes’ career. Three men play a multitude of characters – including women and children – with focus, grace, humor, and expert accents. Movement through the revolving set works wonderfully. Gestures are always specific.

Video by Luke Halls shows through the staging area. Choices are atmospheric, stirring, disorienting. Again, scale is reduced but no less vivid.

Jon Clark’s splendid lighting illuminates and flashes from ceiling squares as well as outside containment with often imperceptible subtlety.

Nick Powell’s music and sound design are affecting and symbiotic.

The Last of the Imperious Rich: Lehman Brothers, 1844-2008 by Peter Chapman is a leading reference on the history of the Lehman family.

Originally Posted on October 20th on Woman Around Town