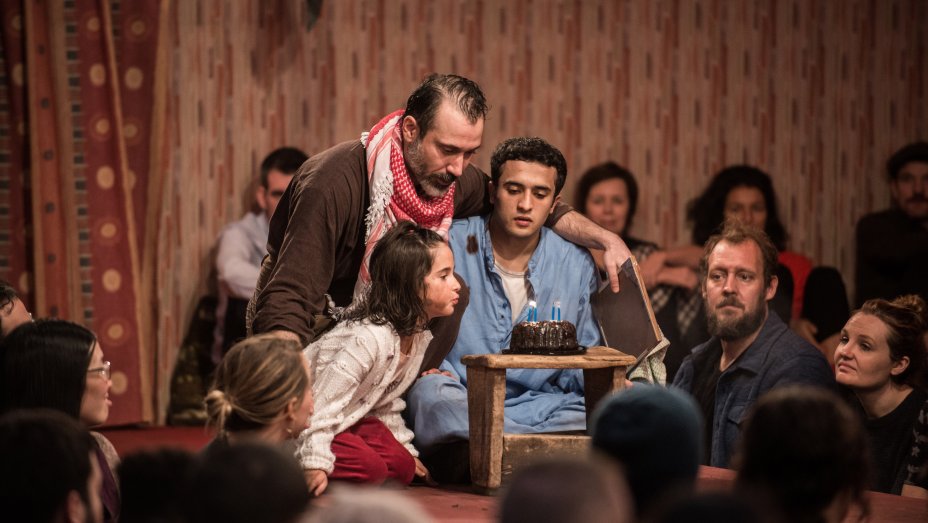 The audience entering St. Ann’s to view The Jungle, a potent drama by Joe Murphy and Joe Robertson inspired by the Calais, France, refugee camps, where the writers had each spent seven months, can thus be excused for feeling slightly disoriented. Instead of seeing the theatre’s classy lobby, they’ll find themselves surrounded by ugly, graffiti-covered plywood walls.

The same holds true in the crudely constructed performance space (brilliantly designed by Miriam Buether), its seating areas named after various third-world countries—mine was Somalia—and packed, beneath its makeshift cloth ceiling, with mismatched wooden chairs surrounding a runway with two, small side extensions. With audience members directly below it on either side, it resembles an early 19th-century kabuki hanamichi, even to the curtain covering its entrance.

Whatever discomfort the 300-plus members of the audience feel during the two-hour and 45-minute work—with one intermission—is nothing compared to that of the 8,000 refugees (the number cited in the script) who, in 2015, found themselves confined to the unsanitary, food and water-deprived rigors of living in the shanties and tents of Calais’s “Jungle” (the Anglicization of the Pashto word “zhango”), built on landfill near the Chunnel to Britain.

Having survived numerous dangers to get there—in their quest to cross over to England, no matter the perilous means—they ended up caught in the misguided crosshairs of political and humanitarian conflicts, reliant on the services of multiple charitable organizations for survival before the Jungle was bulldozed in 2016.

This couldn’t-be-more-topical play, presented as a Good Chance co-production with Britain’s National Theatre and Young Vic, and vigorously directed by Stephen Daldry (Billy Elliot) and Justin Martin, is in the currently fashionable immersive style, with actors located not only on the runway but in the several aisles surrounding the space.

The audience is intended to experience as intimately as possible the emotional and physical crises endured by the bedeviled migrants and the unconsciously colonialist-leaning, British NGOs seeking to help them. Performing The Jungle is a gifted, diverse, international cast of 18, all (except the children who alternate as a little girl) from the original ensemble. As you might imagine, several had visa trouble on arriving at our border.

The action is both realistic and stylized, serious and (occasionally) funny, and the dialogue delivered both quietly and, more frequently, argumentatively. A central character, the Syrian Safi (Ammar Haj Ahmad), also serves as a narrator. Several infusions of songs, solo and choral, help alter the mood. John Pfumojena—who, as Okot, a refugee from Darfur, delivers a poignant narrative of his journey—wrote the music.

Everything is set directly in the Jungle, with the runway serving as both an acting platform and as the tables served by the Jungle’s Afghan restaurant, run by Salar (Ben Turner), which plays a major role in the action. At one point, a character performs several leaps that practically land him in the lap of a runway-side spectator, to whom he apologizes each time.

The Jungle’s plot, which also tells of the camp’s founding, concerns the frantic reaction to the news that the encampment is to be destroyed and its occupants evacuated. We hear from characters representing Sudan, Iraq, Syria, Eritrea, and Afghanistan, who form a united company for self-preservation, overcoming the volatility such a mixture of religious and cultural differences might reasonably be expected to produce.

Safi, noting at one point how the Jungle quickly became a multicultural home to so many differing peoples, asks:

When does a place become a place? By November in the Jungle I could walk from Sudan through Palestine and Syria, pop into a Pakistani café on Oxford Street near Egypt, buy new shoes from the marketplace, Belgian cigarettes from an Iraqi cornershop, through Somalia, hot naan from the Kurdish baker, passing dentists, Eritrea, distribution points, Kuwait, hairdressers and legal centres, turn right onto Francois Hollande Street, turn left onto David Cameron’s Avenue, stop at the sauna, catch a play in the theatre, service at the church, khutba in a mosque, before arriving at Salar’s restaurant in Afghanistan. When does a place become home?

At several moments, the company chants “Yayayayayayaya!,” including an African woman’s ululation. Safi explains that this chant arises when someone safely makes it to the UK: “We call this good chance. Good chance is the dream.” May all such worthy chance-takers eventually succeed, may our own government never build a border wall, and may we and other nations create humane immigration policies. Good chance or fat chance?