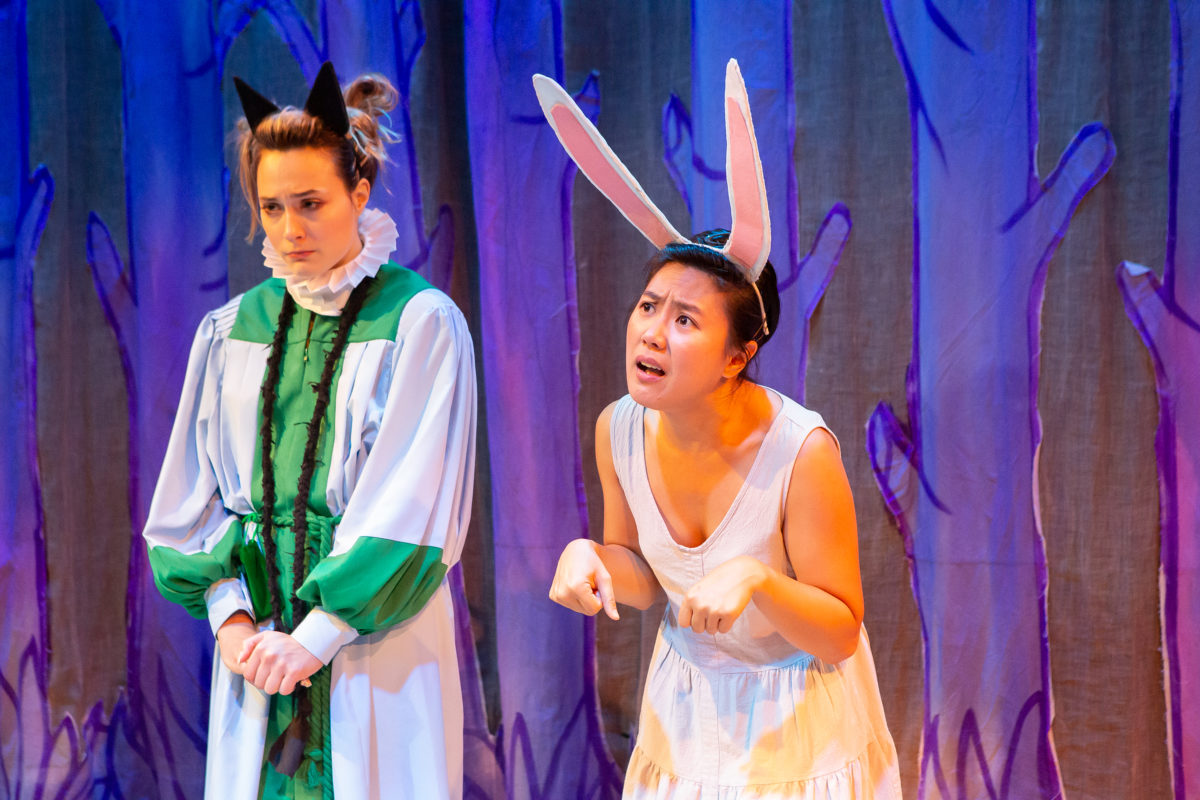 Now at the Flea Theater (of which Wellman is a cofounder), as part of “Mac Wellman: Perfect Catastrophes, A Festival of Plays,” which is celebrating the quirky output of this distinguished avant-gardist, The Invention of Tragedy revels for perhaps 80% of its 70 minutes in “dialogue” like the following:

And chop the chails off all cats.  The bird of alignment off to nuts grows grows a possum hell bore can’t do finger whole of a part yessir yessir yessiree at to on an island scamper way to benumbed fruitcake walk to lean to adventure whose whose which of the parterre o glad eyed speak, er, speech and say not to nothing but hinge grammaticus grammarye’s red boast o machine o machine break down de doom.  O machine of the other the other imagining.

Got it? One line you’ll be constantly reminded of—it actually makes some sense in this zany word salad—is “chop the chails of all cats.” Felines and their nether appendages are a central component of the densely worded piece, made even denser by chunks of it being spoken simultaneously by 10 female voices.

That’s because these deliberately opaque, often punning lines (“paws” for pause, for example), and much of what follows, are spoken by a chorus of young catwomen (the Flea’s resident company, the Bats), their hair in twin, cats ear-like buns, their feet in white sandals, their bodies in designer Alice Tavener’s dumpy, monk-like, green and white robes with white ruff collars.

They perform on a realistic semblance of a high-school auditorium stage (designed by Christopher Swader and Justin Swader), with a furled American flag on one side and a small organ on the other. The latter is played by a narrator (Sarah Alice Shull) who speaks the oddball stage directions into a mic while accompanying the action with Michael Cassedy’s absorbing music as well as the anthemic “America” (“Oh, Beautiful for Spacious Skies”). Cassedy’s music makes a distinct impression in an extensive dance (choreographed by Chanon Judson) perhaps stolen from a zonked-out production of a certain musical about Jellicles.

At the start, the Narrator tells us that the chorus is “trying like the devil to tell . . . the story of the SANDWICH MAN with sandwich boards upon which nothing is written and hence with nothing to say.” They proceed to do this in a gibberish-driven scene called “Catachresis Catatastical” (the first is a real word), during which a dissonant individual (“she is not therefore the same and is different”) appears. She is the Answerer/Answearer (Drita Kabashi), her “difference is a problem,” and her behavior “fractures” the chorus.

Her disruptive individuality is marked by her desire to “PROCLAIM a departure of all cats,” which incites the Enforcer (Susan Ly) to enterwith an axe, declaring “a chorus must speak with one voice.” Perhaps this is meant to suggest the origins of dramatic conflict in ancient tragedy, when one chorus member stepped forth to confront the others. Regardless of how meaningless the speeches—which sporadically convey a modicum of meaning—seem to be, each actor performs with thorough conviction.

Director Meghan Finn—a graduate of Prof. Thomas Bullard’s MFA directing program at Brooklyn College, where Wellman runs the highly reputed playwriting program—must be applauded for how well she’s used movement, vocal orchestration, and creative interpretation to devise what seems to be making sense to the cast, if not always to us. Kabashi is particularly notable, taking her abstract, cartoonish character and making it wryly comic, anguished, and, in fact, almost real. I’m already hoping to see her in something else.

Seeing The Invention of Tragedy is not unlike watching a well-acted, foreign-language movie without subtitles. somehow being able to follow, if not the plot, the actors’ intentions and feelings because of their expressivity. Not that all of the writing is impenetrable, however, and some actually sparks loud laughter (not from me, I’m afraid).

As the play progresses, a smidgen of lucidity emerges, especially when, in a forest, the Answerer/Answearer engages in an exchange with a Hare (Ly), hopping about, her head crowned with large, pink, bunny ears. In reality, she’s the “translated” sandwich board man. Something to do with super-sensitivity toward possible terrorists, you see. And so on, including brief disquisitions on symbolism and tragedy.

A note I read afterward claims that The Invention of Tragedy was inspired by Wellman’s “examination of the post-9/11 world and America’s general and genial acceptance of the Iraq war.” This came as a surprise, as nothing in what I’d seen suggested such a theme, other than, perhaps, a haunting image toward the end. It seemed related to 9/11 but I wasn’t sure how it fit what had come before.

The Perfect Catastrophes festival, which began with Sincerity Forever and Bad Penny will conclude with a double bill of The Sandalwood Box and The Fez. Mac Wellman’s plays are challenging and unconventional. Serious theatergoers who’ve never been exposed to them should pay at least one of the Flea’s five offerings a visit. And if The Invention of Tragedy’doesn’t raise your tail, or fill your litter box, there’s always the upcoming movie of Cats on which to scratch your claws. To which, as is her wont, the Answearer would say: “Hot damn.”