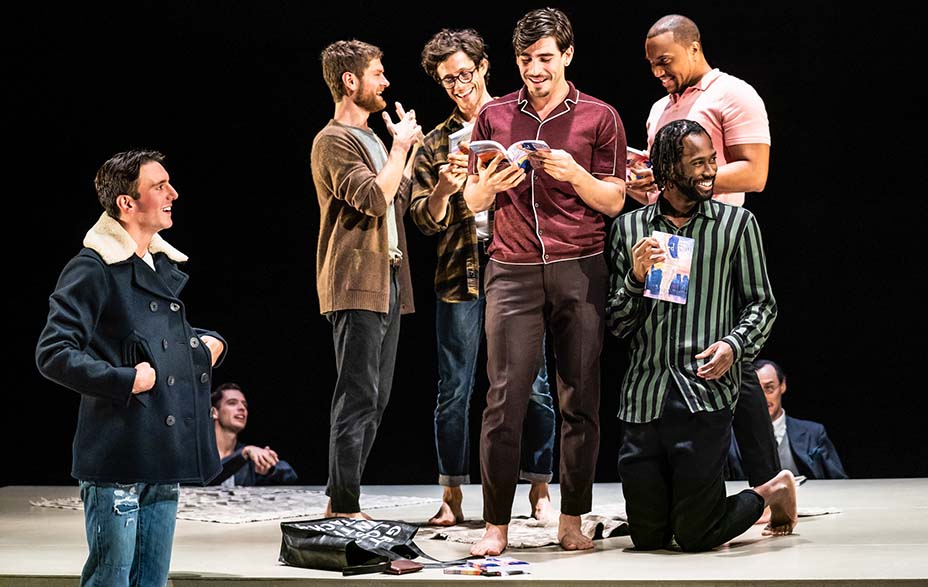 A master of writing He is the master of the odd conceit. In The Whipping Boy, African American Slaves celebrate a Passover Seder, days after the end of the Civil War. And in the bright comedic tale, The Legend of Georgia McBride, the playwright demonstrates a humorous, jarring sense of pop culture. Closer to the characters in The Inheritance, Reverberations, produced at Hartford Stage, delves into an intimate gay relationship.

While this new work has been described as Howard’s End meets Angels in America, it also has roots in a more old fashioned Broadway play, Love! Valour! Compassion! Like Terrence McNally’s drama, the destination setting is upstate New York. More importantly, both plays draw on characters whose self-awareness speaks to their contemporary appeal.

Running nearly 7 hours, The Inheritance, a play in two parts, is a work of epic sweep, and bold narrative conceits. Here the action drives the actors into the audience, as they drag us into their fictional world. It’s a very playful way of breaking the fourth wall, the theatrical convention that separates audience from actor. In fact, it’s become the theatrical conceit of the moment. We see it in Adam Rapp’s The Sound Inside currently on Broadway, not to mention Derren Brown Secret.

Stephen Daldry directs this production with speed, and effervescence. It’s completely engrossing. With a large cast that we don’t always see in Broadway plays these days, the production feels intimate, and larger than life, at the same time.  Sometimes the elegance is in the language, at others, in the poignancy of gay love.

Performed on an open stage, the minimal use of props and set pieces demands resourceful actors. And this cast of nearly 30 men is outstanding. As the narrator, and one of the central characters Kyle Soller is fetching, but sincere, and grounded. Paul Hilton who poses as E.M. Foster (Howard’s End) at the beginning of Part I, morphs into a vulnerable mentor with grace. Playing two opposing characters, Samuel H. Levine, in his Broadway debut gives a breakout performance.

In this production, the only woman is Lois Smith (Margaret), who is also outstanding. Her advanced years radiate the warmth and nurture that only a woman can. It’s she who drives home the story of gay life in America from the years leading up to the AIDS epidemic to present time. For Margaret it is a deeply personal history.

Creating theater in real time brings a gripping form to Lopez’s drama. Politically, it arrives at a timely moment, at the precipice of new challenges to hard fought advances in gay rights.