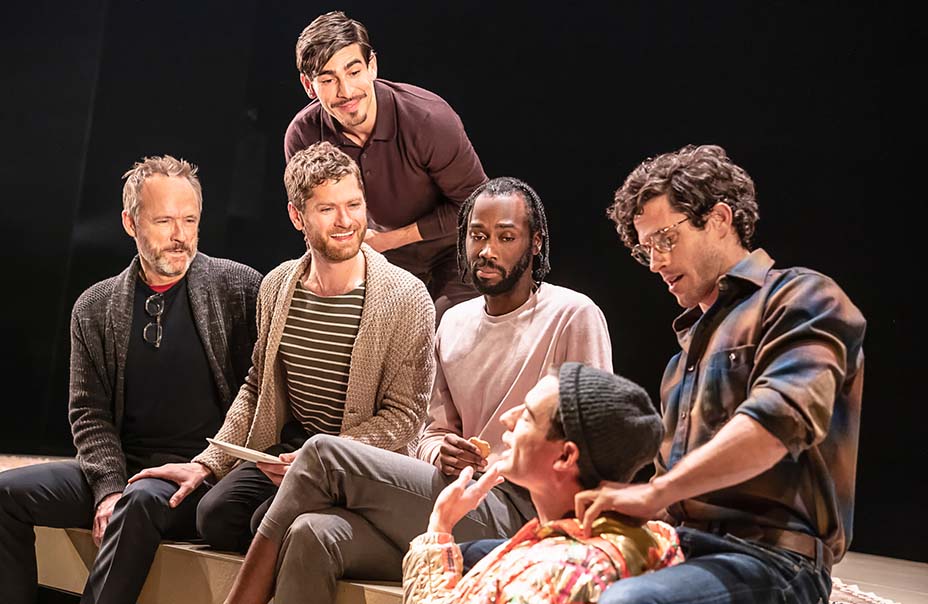 However, the current production flounders under Lopez’s overblown writing, which includes political polemics, moral debates and very long monologues about past events; and founders under Stephen Daldry’s direction, which too readily accommodates Lopez’s every whim.

The simple plot and characters are, in part, supplied by E.M. Forster’s novel Howard’s End.  In fact, the major conceit of the drama is that Forster (Paul Hilton) himself has come back from the grave to guide a group of playwriting students in their endeavors. So, we know from the beginning (that is, if we’ve read Howard’s End) this story will be about the redemptive power of real estate.

At the core of the play is the relationship between Eric Glass (Kyle Soller) and his boyfriend, Toby Darling (Andrew Burnap). Toby is an emerging playwright with an unhappy childhood he’s running away from. Eric is a social activist who lives (with Toby) in the rent-controlled apartment he inherited from his grandmother, a Holocaust survivor. The plot is (or should have been) set in motion by Eric’s imminent loss of the apartment due to his landlord’s refusal to extend the lease. But there’s much more.

Eric wants children. Toby wants sex, and the pursuit of this “commodity” leads him into relationships with Adam, an actor (in Toby’s play) whose star is rising; and a sex worker, whose star, if he ever had one, has long since burned out. Toby’s two lovers happen to be dead ringers for each other and are played with great vigor by the same actor, Samuel H. Levine. Eric finds peace (but not sex) in the company of an older man, Walter Poole, who happens to be a dead ringer for E. M. Forster. And guess what? Poole is also played by Paul Hilton, only with considerably less vigor and more reserve than Levine provides.

Poole is not a healthy man and he soon dies, leaving his house (a gift from his wealthy boyfriend, Henry Wilcox) to Eric. But Eric does not inherit this house. Wilcox (John Benjamin Hickey) and his sons decide to keep it, which is a good lesson in why the rich stay rich.

It takes a few more hours to straighten things out. The reason it takes so long is that Lopez finds it necessary to include the history of AIDS, the 2016 election and various other political and moral issues we have inherited, debated by the male chorus, gathered around a white platform that’s Bob Crowley’s idea of a set.

Despite the play’s expansiveness, it does seem extremely insular. There are apparently no women in these men’s lives. Where are their sisters, mothers, friends who happen to be female? The only woman in the play is the housekeeper, Margaret (Lois Smith) , who comes in at the end to tell us about the sad fate of her gay son, a man we never met before Margaret’s monologue, which, by the way, is so long and overwrought even  Smith can’t save it.

And despite the play’s strong ties to Howard’s End, the Forster novel the young men constantly refer to is Maurice, a novel about a gay relationship, which was published after Forster’s death, the latter fact being the source of considerable anger and scorn.

There’s no doubt The Inheritance has an audience. But that audience will be made up primarily by people who already know the story.