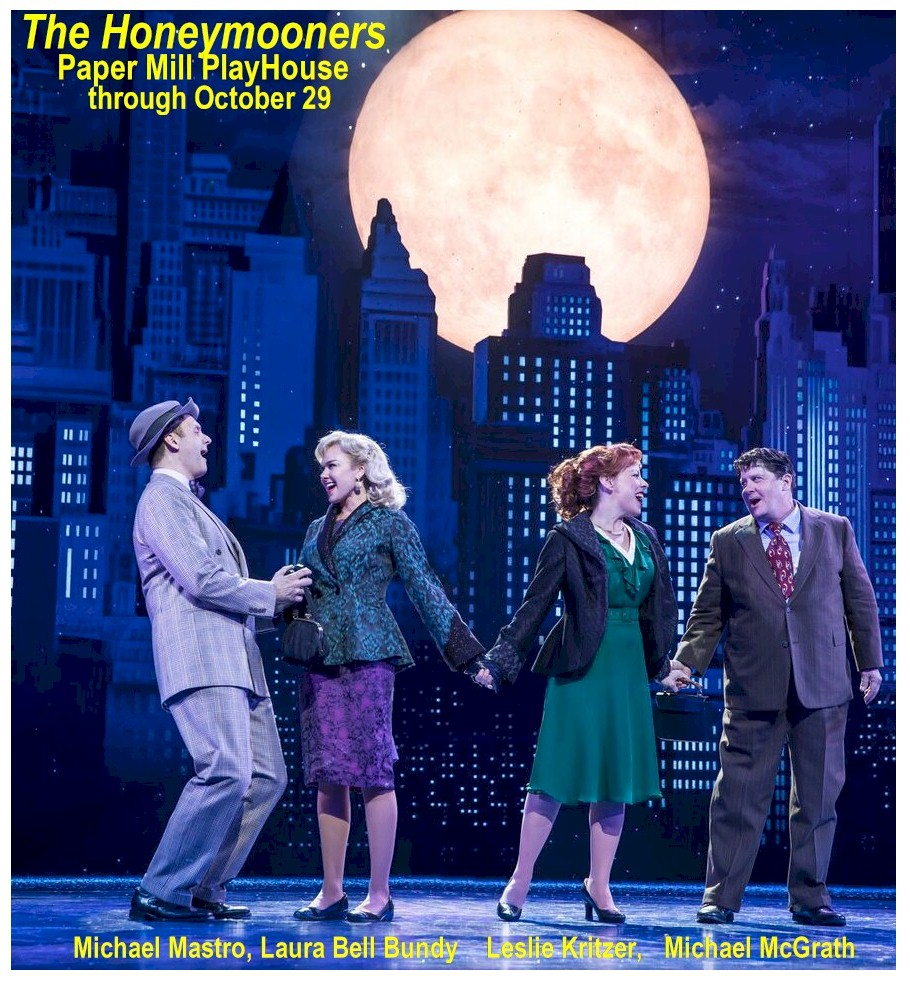 The series aired in drab B&W from 1956-1957 [39 original episodes) and has been in re-runs since. It starred Jackie Gleason, Art Carney, Audrey Meadows, and Joyce Randolph [soon to be a spry 94, who was present for the opening and garnered lots of love from fans.]. The musical, set against a spectacular rendering of the New York skyline, however, is drowned in deep color hues and sparkling rhinestones. It’s a shame, with today’s tech advances that the show couldn’t open, ala The Wizard of Oz, in B&W and segue into color.

The setting is a few weeks before Christmas, 1950: a sparse walk-up in Brooklyn with small “dining room” table barely large enough for two with checkered tablecloth, a drapeless window, sink with separate hot and cold water faucets, and  an icebox, with drip pan underneath. It’s the residence of redhead (who knew?) Alice Kramden and her husband Ralph, a driver for the Gotham Bus Company, who’s prone to daydreaming and dreaming up get-rich schemes. Today’s also Ralph’s long-sought promotion will make all his dreams come true. Starring in these iconic roles are Tony winner Michael McGrath (Nice Work If You Can Get It) and seasoned Broadway star Leslie Kritzer. In the equally iconic roles of best friends and neighbors Ed and Trixie Norton are Michael Mastro and blonde bombshell belter Laura Bell Bundy, whose breakthrough role came in 1992 was as the teenage horror child actress in the Off Broadway hit Ruthless; and who earned a Tony nomination for her Elle Woods portrayal in the stage adaptation of Legally Blonde,  McGrath and Mastro bring such brilliance to their impersonations, you’ll believe Ralph and Ed jumped out – totally colorized – from your wall-mounted flat TV.

And, yes, Ralph is still at his get off Chauncey Street schemes – abetted by faithful Ed. This time he and Norton concoct an awful jingle for a contest sponsored by an Italian cheese company and its ad agency – and, lo and behold, win – with a huge payout, their entry as execs in the cutthroat world of Mad Men, and lush living on Park Avenue.

Snippy realtor (Harris Milgrim) showing Alice and Ralph a penthouse states: “Our tenants are carefully screened and enjoy the highest level of affluence.” Ralph replies: “How about that, Alice? When you yell out the window to neighbors, you’ll have millionaires yelling back.”

Ralph never realized Alice is smarter and savvier than he is – but he does come to that conclusion finally in the book by TV veterans Dusty Kay and Bill Nuss – their credits include, respectively, Entourage and Roseanne; and Hawaii Five-0 and the NCIS franchise. They have been smart enough to include many golden moments from the beloved series – and would have been smarter to include more in the two-hour and 40 minute production. Certainly, some would be a welcome addition to Act One. Alice, who more often than not outsmarted her King of the Castle, always stood by her man because she knew all that bellicose “To the moon” barking was just him being a “blowhard and wind-bag” opening his “biiig mouth.” She/Kritzer also has an Act Two showstopping moment that generated the kind of thunderous applause Bette Midler gets even when she wiggles her pinky in Hello, Dolly! Her feminist anthem, way ahead of its time, “A Woman’s Work”’ literally brought the house down.

Fans of the TV show may be stunned to learn that Trixie is an alum of burlesque theater. What?

A bit of research proved that this info was dropped in a lost episode not found/aired until the mid-80s because it was considered too risqué for the time. This background gives Bundy saucy moments in a skirt slit up to “here” or in skimpy costumes. She’s proven she can pretty well pull just about anything off, but all her pulling off here is a bit jarring – no fault of hers – she didn’t write the book, but it simply doesn’t seem like the Trixie we know and love. In her spicy number, “Keepin’ It Warm,” set in New York’s famed, but long-gone El Morocco, she comes over more like Adelaide giving back her mink in Guys and Dolls –,certainly a nice throwback to the period.

There’s a bit of drama in Act Two, when Kramden and Norton’s loyalty to each other is tested when they discover their quest for riches could cost their friendship. But most of the show is light and breezy. It’s a shame there aren’t more memorable musical numbers.

Weiner and Mills come through with a couple, like Norton’s tune with his sewer buddies, “Love Gone Down the Drain,” when it appears he and Trixie are heading for d-i-v-o-r-c-e over one – well, two misplaced kisses; and the quite inventive Act Two opener “To the Moon.” Whatever you do, get back from the bathroom quickly so you don’t miss this tune made up of famous zingers from the series: Ralph: “One of these days, Alice. One of these days, you’re gonna get yours! I don’t know when, Alice. I don’t know when, but I’ll give you a couple of what-fors and you’ll be taking a trip where you never come back … You’ll be going bang, zoom ! To the moon!” Alice replies: “Har-dee-har-har!”

When the actors stay very close to their fictional selves, the show soars. It also doesn’t hurt to have infamous scene stealer Lewis J. Stadlen, known for his Groucho impersonations, as the crusty head of the cheese company (no one does deadpan as well as him]; Lewis Cleale, as ad agency exec Bryce Bennett, who seems to be the adult version of How to Succeed …’s Bud Frump; or the impeccable pizzazz offered late in the show by Michael Walters after Trixie perform another winning jingle on TV.

Tony winner John Rando (Urinetown) keeps the show moving. Beowulf Boritt, another Tony recipient, has not only designed that fore-mentioned New York skyline but also an ingenius set of boxes that revolve, track, and open to reveal various sites. Costume designer Jess Goldstein gets kudos for his accurate reproduction of Kramden’s famed, loud golf outfit, which is being seen for the first time in vivid colors. Music directing the 10-piece orchestra, which sounds like 20, is Remy Kurs.

Of course, The Honeymooners is a musical and one expects dance in addition to song. Choreography, from tap to elegant ballroom, of which there is too much – and soon begins to feel like filler, is by Tony and Emmy winner Joshua Bergasse.