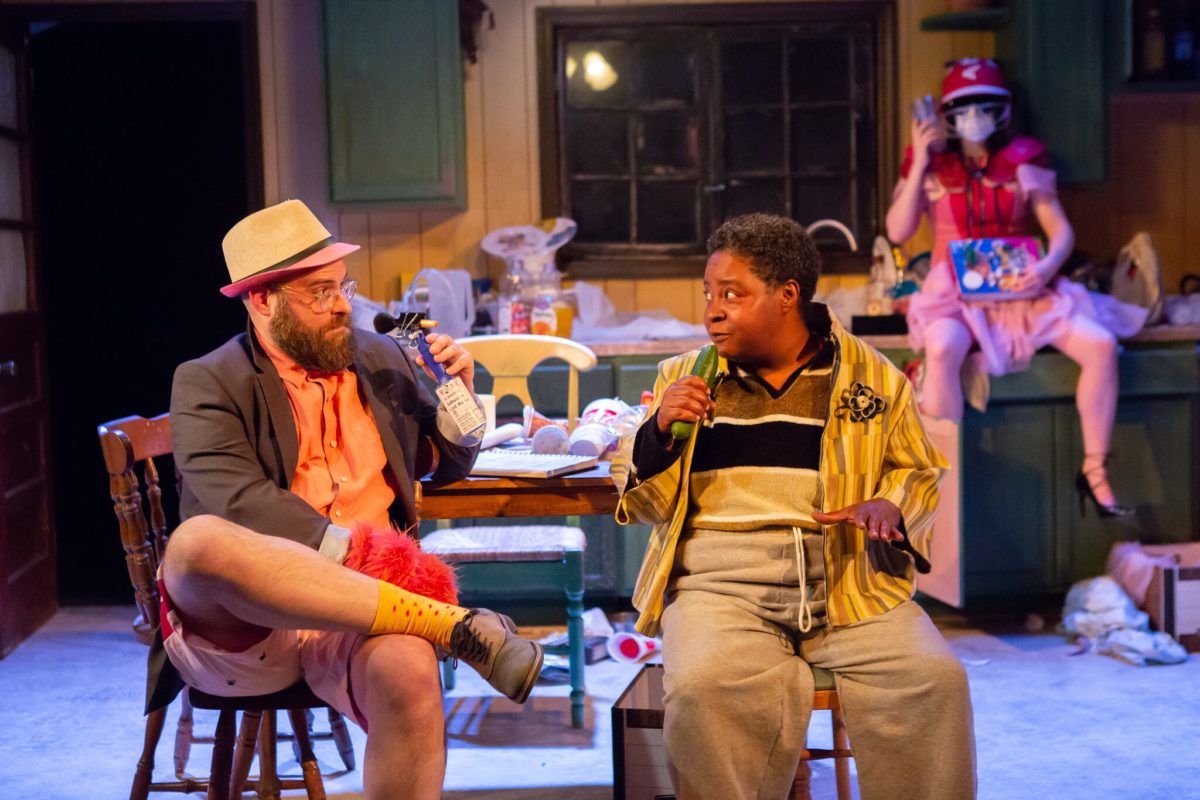 Although no celebrities are mentioned in The Hollower (I gleaned them from Wikipedia), Liza Birkenmeier’s oddball comedy at the tiny Access Theatre, we do learn something in it about the filles du roi. That, I submit, will be the play’s biggest takeaway for those previously uninformed.

Actually, those 17th-century women—the equivalent of mail-order brides—is not what The Hollower itself is about (although there may be some hidden symbolism there) but their story sure deserves a play of its own. We hear about them in The Hollower from an eccentric (to say the least) teenaged girl, Bit (the suitably named Reyna de Courcy, quite good), who sings that she’s “sixteen going on seventeen.”

Bit lives in an unkempt, seedy, South Florida home (carefully designed by You-Shin Chen) with her foster mother, Otto Ottley-Borlo (Patrena Murray, so good in the Public’s recent The Winter’s Tale), a 40ish black lesbian. Otto is depressed because of her breakup with her lover, which appears to have happened shortly before Bit came into her life, a circumstance left unexplored.

Birkenmeier exploits Bit’s eccentricity for all its worth, having her dress in outlandishly garish outfits (designed with relish by Max Archimedes Levitt), such as sky-high heels that force her to stumble instead of walk; a striped, over-the-knee stocking on one leg, a sock that’s barely there on the other; and various other bizarre accessories, including an assortment of cheap, neon-colored wigs. Raised in Africa and Europe by cultist parents, Bit is suffering from raging teenage angst (and hormones).

Something of a savant, Bit’s in a high school program for “gifted students with executive functioning issues.” Her words spill out in rapid-fire Valley Girl-like rhythms, overusing “like,” and turning every other declarative statement into a question. She’s preoccupied with two things: a school project she’s collaborating on with the 18-year-old Wilkin Rush George III (Samuel Im)—Birkenmeier has a thing for cutesy names—and her “funeral doom doo wop” band, the Chemotherapy Marionettes.

Bit’s goal is to make a Claymation film—the appellation she uses to describe Wilkin’s talents gets one of the better laughs—about those filles du roi; her focus is on a particular woman who was hanged for witchcraft, a woman in whose unconventional life Bit, perhaps, sees a bit of herself. (The historical facts, though, seem doubtful, at least as per a report in the Montreal Gazette that no one was ever executed for witchcraft in New France.)

The scenes dealing with Bit and Otto are relatively straightforward. Bit’s antics, like constantly guzzling a big bottle of cola (whose contents barely decrease in quantity, one might add) or stripping to her bra and panties to seduce the thoroughly disinterested—if you can believe it—Wilkin, are certainly way over the top. However, given her obsessive need for attention and love, they’re also completely reasonable in this context.

Where the play—decently directed (given its problems) by Kristy Dodson—goes really off the rails is in depicting Otto’s inner world. Whenever she’s with Bit, Otto is low key, slightly distracted, and more reactive than proactive. She doesn’t blink an eye at Bit’s bizarre behavior, and, while obviously caring for her ward’s welfare, gives her so much free rein that the emotionally needy Bit becomes upset at her laissez faire attitude. While their relationship is sketchily drawn it’s at least fundamentally comprehensible.

But once she’s alone, Otto fantasizes about being the focus of an obnoxious podcaster’s attentions; this is the imaginary Pigman (Ryan Wesley Stinnett), whose principal porcine feature is having a hoof for one of his hands, although it’s nearly impossible to tell just what the pink-fringed thing is.

Pigman and Missy (ToriAnne DiFillipo), his even creepier, speechless assistant, decked out in a dress with football shoulder pads, a football helmet, sunglasses, and a mask across her mouth, enter through the window, under the sink, or through a wall. They conduct their interview/interrogation/examination with household items serving as their mics and technical equipment. Otto, for her part, is happy to promote her memoir, Nothing, about the emptiness of her life. Go figure. I won’t even try.

Although not particularly campy, The Hollower is reminiscent in its exaggerated mix of the comically real and unreal of Charles Ludlam’s Ridiculous Theatrical Company. It has a few good moments but is never funny enough, clever enough, or even touching enough to make us laugh (the few I heard sounded forced) or care.

On the other hand, it proves, once again, that even mediocre theatre can be educational. I’ve now learned not only about the King’s Daughters but that funeral doom—usually associated with metal music—is a REAL thing.

What I didn’t learn, though, is the reason for the title, The Hollower, a term never mentioned nor otherwise explained. Given the vocal decibel level when, late in the show, the Chemotherapy Marionettes shout the chorus of their funeral doom doo wop, perhaps a better title would have been The Hollerers.