There’s more than a tinge of irony in the fact that two current NYC productions depict the  travails of the American working class and none of the characters could probably afford the price of a ticket. Aside from this economic consideration, both The Hairy Ape and Sweat offer insightful looks at their struggling subjects. 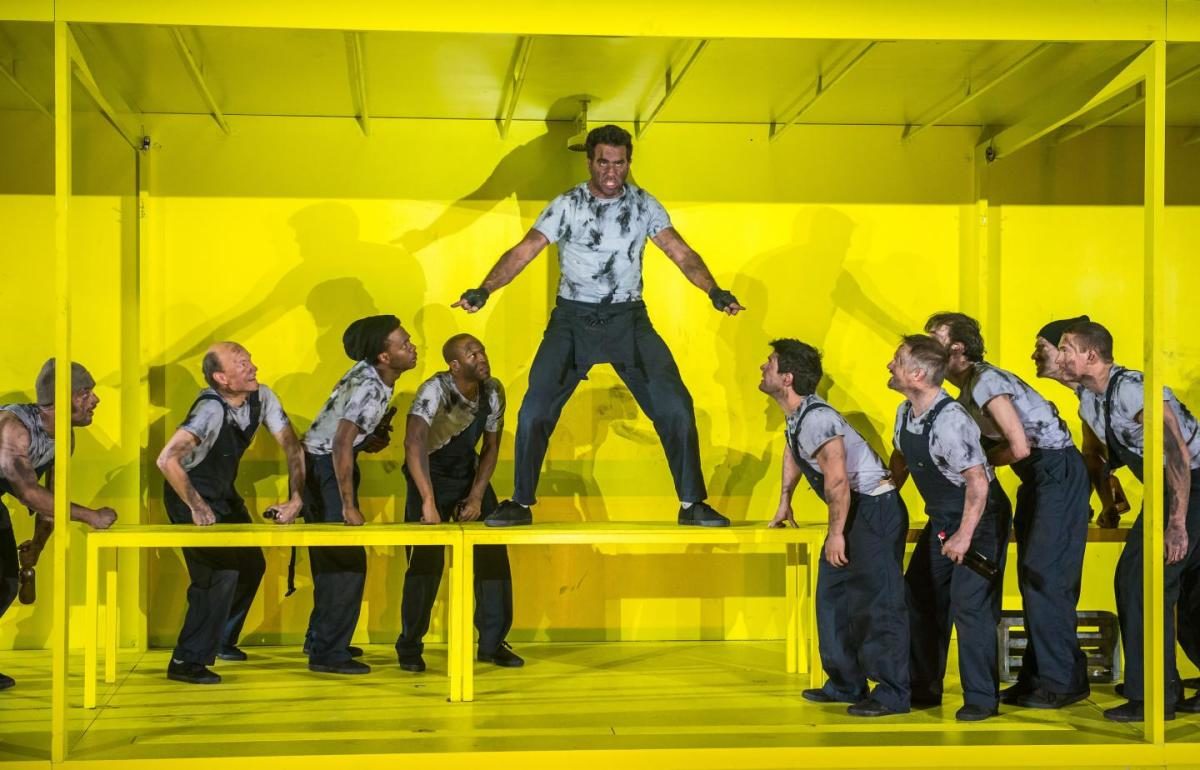 There’s more than a tinge of irony in the fact that two current NYC productions depict the  travails of the American working class and none of the characters could probably afford the price of a ticket. Aside from this economic consideration, both The Hairy Ape and Sweat offer insightful looks at their struggling subjects. Though written nearly a century apart and from different dramatic perspectives, both shows portrait their protagonists at the mercy of gigantic forces beyond their control. Yank, the bull-headed coal stoker at the center of Eugene O’Neill’s 1922 expressionist drama Ape, starts out as the king of the lower decks, proclaiming he is the engine that drives the mighty ocean liner where he works. Likewise, the habitués of a Reading, Pennsylvania bar in Lynn Nottage’s Pulitzer Prize-winning Sweat, now at Studio 54 after a hit run Off-Broadway at the Public earlier this season, imagine their jobs in a tubing factory are secure because of their generation-old seniority. (There is another layer of irony in this tale of proletariat woe taking place in the former headquarters of elitist disco revelry.) Both O’Neill and Nottage’s regular Joes are in for a rude awakening.

Another similarity is the high-caliber direction, design and acting each play receives. Richard Jones’ brilliantly bizarre production of the O’Neill take full advantage of the cavernous Park Avenue Armory space. Designer Stewart Laing places set pieces on a circular conveyor belt which glide into place before the audience like the stations on an assembly line or cages in an exhibition. Yank and his fellow toilers are tiny figures in a huge, nearly empty warehouse, lit like a jungle nightmare by Mimi Jordan Sherin and supplied with a frightening soundscape by Sarah Angliss. Yank (a magnificently robust Bobby Cannavale) is the alpha male swinging from the roof of his enclosure, flaunting his muscles and dominating the rest of the crew. But when a millionaire’s spoiled daughter (an appropriately bratty Catherine Combs) calls him a “filthy beast,” he loses his sense of belonging and vainly attempt to regain it in various locations symbolic of the rich (Fifth Avenue), labor (a radical union hall), and his animal instincts (the Central Park Zoo). Jones turns Yank’s journey into a road trip to hell, creating one amazing encounter after another. A noir-ish jazz age dance number (Aletta Collins provided the frantic choreography) is followed by a riot in a cell-block, then we get a Metropolis-like vision of faceless wage slaves trudging in rhythm as a heedless rich couple drunkenly falls over themselves and a huge balloon with the face of the shipping line CEO floats heedlessly above it all.

While Hairy Ape is a daring example of unconventional theatrical forms, Sweat is a relatively safe specimen of the kitchen-sink genre (in another ironic instance, the older play is the more adventurous). Nevertheless, Lynn Nottage’s slice-of-lifer is moving and impactful even if the plot is somewhat melodramatic, thanks to Kate Whoriskey’s detailed direction and the cast’s compassionate performances. The play opens in 2008 with parallel scenes of a parole officer interviewing Jason and Chris, two recent ex-cons, on their difficult readjustment to life on the outside. Then we switch back to 2000 when Jason and Chris, along with their respective mothers, are all working for the local factory. Prospects for the future seem rosy with their wages secure and the union strong, but trouble begins to brew as management downsizes and workers clash along ethnic and racial lines. Based on interviews with real Rust-Belters, Nottage’s script feelingly captures the plight of the working class, frozen out by internationalism and technological advances. Monologues by Tracey, Jason’s mom, recalling the beauty of her grandfather’s carpentry skills, and co-worker Jessie on her regretted life choices, are particularly moving.

Yet too much of the action feels like a checklist as topics such as opiate addiction, immigration, and automation are crossed off. The story cumulates in a soap-operatic, tragic act of violence connecting the two timelines with lives shattered by the uncaring actions of the unseen factory owners. (The play probably would have been more powerful and true-to-life if Nottage had not created such an obviously theatrical, tearjerking finish.) Kudos to Johanna Day’s flinty Tracey, Alison Wright’s wistful Jessie, John Earl Jenks’ conflicted Brucie (Chris’ drug-addicted dad), Michelle Wilson’s fiery Cynthia (Chris’ determined mom), and to Will Pullen and Khris Davis who convincingly portray Jason and Chris at different stages of their lives. John Lee Beatty’s set captures the gritty atmosphere and Jeff Sugg’s video projections provide the political and social context.

For bracing comic relief to all this gloom, the Mischief Theatre Company, a troupe of British loonies, have brought two hours of hilarity to the Lyceum Theater with The Play That Goes Wrong. A college theater troupe mounts a cliche-ridden murder mystery and everything goes south. Cues are missed, props go missing, the set falls apart (Nigel Hook designed the “deathtrap” of an old mansion). A fellow theatergoer best described it as “Noises Off on steroids.” You would think this one-joke premise would run out steam after an hour, but Mark Bell’s breakneck staging keep the guffaws building and as the play-within-a-play keeps deteriorating. The English company is an inspired lot of buffoons with playwrights Henry Lewis, Jonathan Sayer and Chris Bean pulling double duty as a prime suspect, frazzled butler, and nincompoop police inspector. I particularly enjoyed Dave Hearn as an upper-class twit and the brainless actor playing him. He smiles goofily at every flub and basks in audience laughter as if it were approval rather than mockery. The Play That Goes Wrong is marvelously right with English visitors giving us Americans a welcome break from the Trumpian onslaught predicted by Sweat and Hairy Ape.