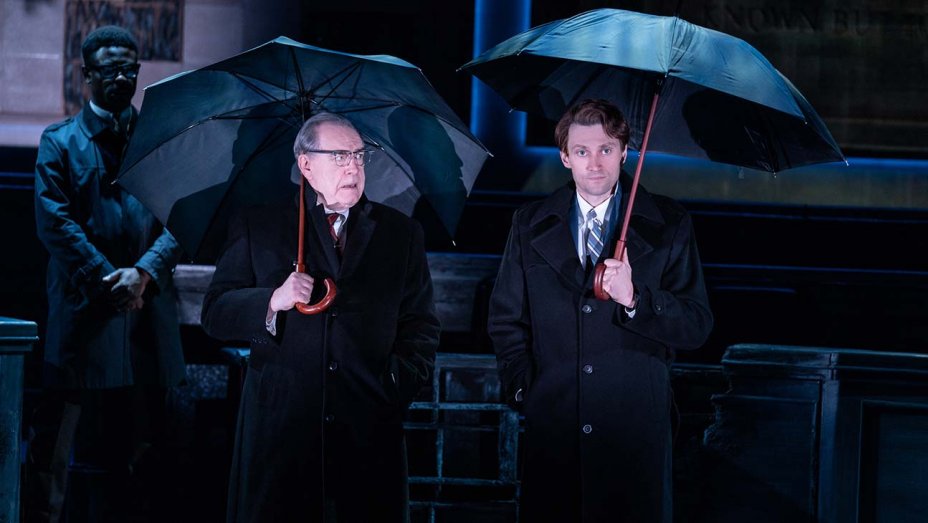 The Great Society was the catch-all phrase for LBJ’s myriad social programs to improve the lives of American’s poverty-stricken masses and curb racial discrimination including Medicare, urban renewal, stimulating employment, and aiding economic development. The play recounts Johnson’s herculean efforts and Machiavellian strategies to push his agenda through while activists led by Martin Luther King demonstrate to go further and conservative Republicans push back because he’s gone too far. A skirmish in Vietnam slowly grows into a monstrous war and swallows the president’s well-intended domestic template whole, forcing LBJ to not seek re-election and his vice-president Hubert Humphrey to lose the 1968 election to the regressive Richard Nixon.

Schenkkan plots an enormous canvas with 19 actors playing over 35 roles and Rauch does an admirable job of cleanly and clearly staging a plethora of incidents including MLK’s march on Selma, J. Edgar Hoover’s clandestine surveillance of the administration’s opponents, the student protest movement, the passage of Medicare, riots in Watts and Chicago, and the Democratic primaries. There’s a lot going on and the lens is too broadly drawn to be completely effective despite the invaluable aide of Victoria Sagady’s graphic video images, David Weiner’s stark lighting, and David Korins’ sleek unit set. As a result, the play is closer to a Ken Burns documentary than a moving drama.

All the Way had the benefit of a commanding central performance from Bryan Cranston as Johnson. Brian Cox is to be commended for tackling the mammoth role of LBJ who narrates and comments upon the action with lengthly monologues and is seldom absent from the stage.  But the accomplished British star, renowned for playing tough-minded authority figures in everything from Shakespeare to the X-Men franchise and the HBO series Succession, appears ill at ease and hesitant in his delivery of Schenkkan’s folksy dialogue. Plus his Texas accent is a might shaky. It’s a hit and miss performance. He occasionally scores a direct hit when Johnson successfully manipulates the various political figures into doing his bidding, but not often enough. When he confronts David Garrison’s cartoonish Nixon in the final scene, the impact of LBJ’s condemnation of his shifty successor should be devastating, but instead it fizzles and the play ends on an anti-climactic note.

Race relations are examined at a much deeper and more complex level in Jeremy O. Harris’ Slave Play, now on Broadway at the Golden. The play opens on Clint Ramos’ mirrored set, reflecting images of an antebellum Southern plantation. Three interracial couples, each a variation on the slave and master set-up and dressed by Dede Ayite in character-defining 19th century costumes, engage in power dynamics which quickly become sexual. The occasional slipping into 21st century slang or the incongruous intrusion of Rihanna’s “Work” on the sound system reveals all is not quite as it seems.

SPOILER ALERT: Since the play has already had a successful run Off-Broadway last season at New York Theater Workshop, it will not be too much of a spoiler to continue with the plot, but if you want to be surprised by the twist, which is kind of predictable, skip ahead. One of the characters calls out “Starbucks” and the amorous action stops. It turns out these are contemporary couples engaging in a radical form of therapy, acting out fantasies of black and brown servitude and white supremacy to get the root of their sexual dysfunction. Two cliche-spouting therapists then conduct a group session “unpacking” the participants’ interactions which is theorized to be based on centuries of racial oppression.

This is a startling choice for a Broadway transfer since Harris unflinchingly delves into uncomfortable territory with a razor-sharp wit which cuts like a scalpel through polite liberal assumptions on race. Director Robert O’Hara skillfully balances riotous comic staging with searing pathos as each of the lovers and their counsellors rips off their masks and bares their wounds and psyches.

Joaquina Kalukango, the only new addition to company from the Off-Broadway run, is shattering as the most vulnerable of the patients. As Kaneisha, the suppressed African-American wife of the suffocatingly white, British and proper Jim (an appropriately wound-up and buttoned-down Paul Alexander Nolan), she holds in her repressed desires and conflicted emotions for much of the play and then releases them like a volcano in a marathon monologue, summing up Harris’ thought-provoking and barbed observations on the state of race relations today.

A basic plot synopsis of Ross Golan’s musical The Wrong Man—no relation to the 1956 Hitchcock classic with Henry Fonda—might lead you think it also deals with racial tensions in contemporary America. In Reno, Nevada, an African-American young man with a troubled past named Duran (dynamic Joshua Henry) is framed for the murder of his pregnant girlfriend Marianna (passionate Ciara Renee), also a victim of unfortunate choices. The crime was actually committed by the woman’s psycho ex who quickly disappears in Mexico. Themes of social justice are not developed beyond a cursory once over and Duran’s race is not even addressed. The emphasis is on the melodramatic, implausible machinations of the crime. Duran and Marianna are hardly sketched in further than a few broad strokes while her dangerous former spouse, known only as the Man in Black (a charismatically evil Ryan Vasquez), at least has a riveting dark presence.

Fortunately, Golan’s sung-through score and lyrics have enough drive, heart and sizzle to maintain involvement for the 90-minute running time. Pulsating rhythms, multiple genres, and rap-infused rhymes make up for the lack of character depth as does the intense, heart-felt performances, particularly that of Henry whose intense vocals and acting endow Duran with a substance the script lacks. Thomas Kail of Hamilton fame has directed the show with incredible variety, utilizing the nine-person ensemble on Rachel Hauck’s minimal set imaginatively. Travis Walls’ eloquent choreography and Betsy Adams’ neon-accented lighting add vitality to this half-right Wrong Man.