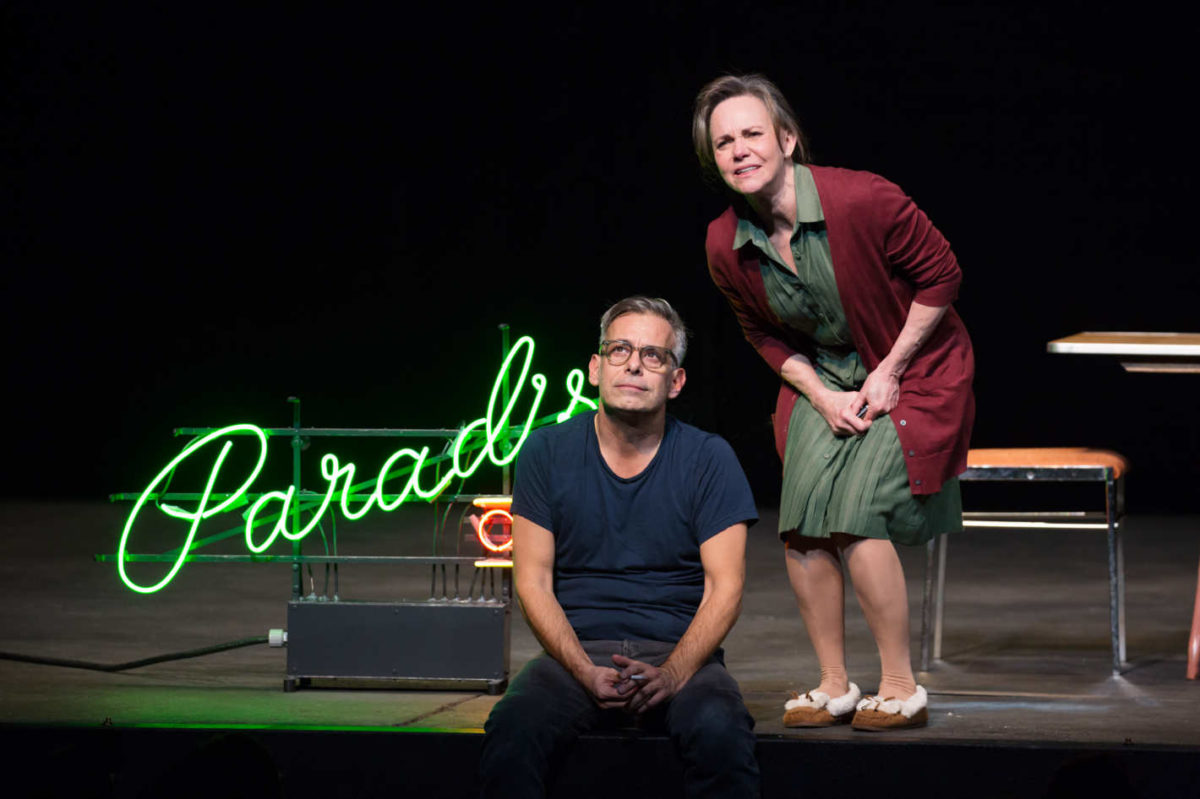 Unlike John Tiffany’s 2013 haunting, surrealistic dream vision, Gold offers a raw, unvarnished retelling of Williams’ autobiographical tale of the fantasy-ridden Wingfield family and the brief, heartbreaking visit by a charismatic Gentleman Caller to the painfully shy daughter Laura. Tiffany’s staging stressed the script’s ephemeral memory aspect but also brought out the deep love between the Wingfields. The deep affection among the family is here thanks to soulful connections between Joe Mantello’s layered Tom and Sally Field’s somewhat clownish, rage-filled Amanda, the desperate mother. But Gold’s inconsistent, concept-driven direction obscure this bond and Williams’ themes of comforting lies versus harsh reality.

Why have a drenching onstage rainstorm during the Gentleman Caller dinner scene when you’ve established a minimalist, no-frills aesthetic? Why have that sequence accompanied by a contemporary song when the rest of the score evokes the time of the play, the late 1930s-early 40s?

To add to the confusion Gold has cast Madison Ferris, an actress with muscular dystrophy as Laura whom Williams describes as having a limp. Ferris exudes a confident air even as she is helped in and out of her wheelchair and moves with difficulty by herself. This is totally contrary to Williams’ depiction of Laura as a pathetic creature who can’t even sit through a typing course without being ill. This Laura can take care of herself, a choice which diffuses the impact of the tender encounter with Jim O’Connor, the Gentleman Caller, played as a shallow narcissist by Finn Wintrock.

It’s understandable that Gold would want to try a startlingly different tack since the play has been done so often and Williams’ original intent was to shake up theatrical conventions. I have previously seen the play three times on Broadway (with Julie Harris, Jessica Lange, and Cherry Jones), Off-Broadway (Judith Ivey), in summer stock (with Maureen Stapleton), regional theater in Philadelphia (Geraldine Fitzgerald), community theater, Off-Off-Broadway, on film (Gertrude Lawrence and Joanne Woodward), and TV (Katharine Hepburn). (I have not yet seen the restored 1966 broadcast with Shirley Booth.) So a fresh approach is admirable, but why blast away all the poetry?

Stephen Sondheim and Hugh Wheeler’s magnificent musical horror show Sweeney Todd is as gritty as Menagerie is gauzy, and a radical staging shift does not diminish its power. Harold Prince’s original 1980 production was set in a giant factory. In 1989 Susan L. Schulman placed it on a crowded London street. In 2005, John Doyle moved it to an insane asylum, and last summer’s Glimmerglass version was played out in a 1950s town hall. A new production imported from London places the thrilling tale of a throat-slashing barber and a cannibalistic cook in its most logical setting—a meat pie shop—and the results are deliciously devilish. Designer Simon Kenny has transformed the Barrow Street Theatre into a cozy eatery with audience members crowded into shared tables and benches, munching on Mrs. Lovett’s delicacies before the show starts.

Like Sam Gold, director Bill Buckhurst has stripped Sweeney down—there are only eight actors and three musicians—but he has not attempted to deconstruct it. Buckhurst uses the intimate setting to create a terrifyingly close experience, having the actors move around and on top of the tables. It’s like being trapped inside a closet with a razor-wielding maniac (Amy Mae’s lighting, with the instruments hidden behind gratings, makes the atmosphere particularly spooky.) At one point the deranged Sweeney screams “MOVE!” to a theatergoer so he has enough room to strangle a victim.

That bloodcurdling command is uttered by Jeremy Secomb, a holdover from the British production and probably the most frightening Sweeney you’ll ever see. His rumbling baritone and imposing physique are accompanied by a thousand-year stare which he fixes on certain patrons. Siobhan McCarthy captures Mrs. Lovett’s jolly amorality with precise comic timing. Two other Brits, Duncan Smith and Joseph Taylor create memorable impressions as the vile Judge Turpin and the spritely Toby. Among the fine American players, I especially enjoyed Betsy Morgan’s double turn as the addled Beggar Woman and the boisterous rival barber Pirelli. Music director Matt Aument and his trio manage to impart the lushness of Sondheim’s complex and gorgeous score.

Tracey Letts’ Man from Nebraska at Second Stage begins minimally but gradually takes on the weighty subjects of faith and finding your place in the universe. The opening scenes depict late middle-aged businessman Ken Carpenter and his wife Nancy on a typical Sunday with very little dialogue: attending church, eating out, visiting Ken’s elderly mother in a nursing home as the TV blares, driving home, going to bed. But suddenly Ken bursts into sobs and cries “I don’t believe in God anymore.” The rest of the play follows Ken as he searches for meaning in a meaningless world. Letts’ script is packed with subtext, brought out by an insightful cast and director (David Cromer). As he did in last season’s The Humans, Reed Birney as Ken creates a shattering and affecting portrait of a man suddenly without moorings. Annette O’Toole is equally heart-wrenching as his alienated spouse. The playwright is best known for the Pulitzer Prize winner August: Osage County, which was something of a massive melodrama about a large dysfunctional family right out of Shepard and Albee-ville. He achieves more devastating effects by tightening his focus onto one Man adrift.

Originally Published on March 12, 2017 in ArtsinNY.com