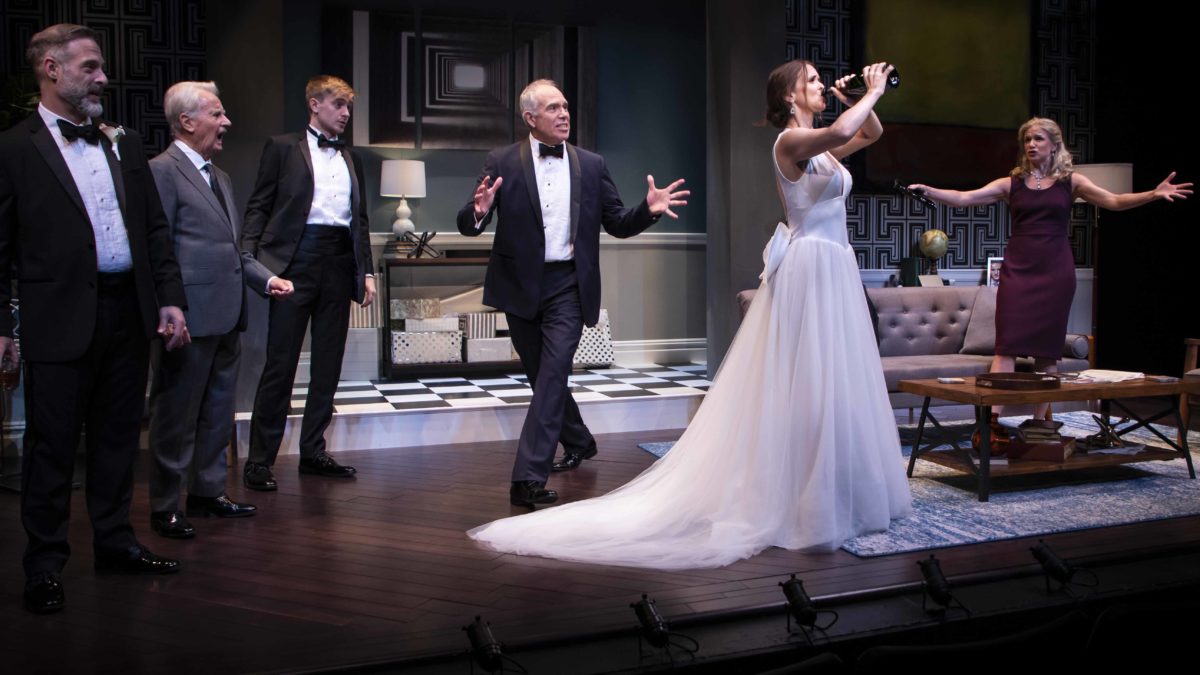 I admit to having heard scattered chuckles during the slightly less-than-two hours (with one intermission) of this woeful comedy of manners, but I swear not one escaped from between my grumpy lips. This is all the more disappointing because Craig Napoliello’s slickly designed set of a wealthy man’s drawing room (albeit with furniture resembling 1950s Danish modern)—visible on entering—sets you to up to expect the proceedings will have a similar touch of class. It doesn’t take long, though, for the play and its generally uninspired performances, heavy-handedly directed by Magda S. Nyiri, to convince you you’re watching a community theatre production of some deservedly forgotten Barry-like retread.

The constantly buzzing cellphones, the mildly salty language, and various other contemporary references, of course, denote the time as now, not the 30s, but the style, the substance, and the story all seem like clichéd throwbacks to a different time. Skomal places us in the fancy apartment of Richard Killingworh (Tim Hayes), a plutocrat in his 60s, preparing for the wedding that day of his daughter, Victoria (Alison Preece). She’s a spoiled, stressed-out, 35-year-old, who’s resisting the signing of a prenup.

Also getting ready for the event is Richard’s friend, the well-off but more frugal Dick Wright (David M. Farrington)—yes, there’s a “dick” joke—although he drives an $80,000 car he calls a Beemer. (This appears to be a slipup: Beemer is slang for a BMW motorcycle, while Bimmer is a BMW car.)

The men are connected through their both having been married to a flashy woman named Mavis (Karen Forte), who is determined to get Richard to sign her divorce papers. She needs this because the limits on her residence in Denmark have expired and she wants to marry her Danish lover, the foppish Marcel Nistlerood (Kyle Porter), whose last name the playwright thinks is prime joke material. Moreover, Mavis, resented by Victoria, her stepdaughter, has not been invited to the wedding but hopes to crash it nonetheless.

Of the others involved in the less-than-scintillating complications are Prim (John Coleman Taylor), Richard’s prim (what else?), Saville Row-tailored, white-haired, British-accented butler. Prim’s snobbishness (he prefers being called a “house manager” to the déclassé term “butler”) and distaste for being considered one of Richard’s “assets” form a major plot point.

We also meet Garrett Wright (Galen Molk), Dick’s snarky, 23-year-old son, who adds a fillip of reason to the irrationalities of his elders.

Finally, there are the unseen hordes of enraged florists who are protesting Richard’s failure to sufficiently share the profits of a product in which he invested. This is a boutonniere that never dies and is called a “Boutonn-Ever,” “the forever flower,” of whose unique properties we’re forever reminded.  (The disgruntled florists, by the way, inspire the sole moment of theatrical creativity, a slo-mo reenactment of the debacle they created at Victoria’s wedding.)

Only Molk’s Garrett and Taylor’s Prim find seeds of human honesty in their otherwise conventional roles. Their cast-mates, however, too often can’t resist the siren call of overacting to cover up the writing’s weaknesses. While neither Farrington’s Dick nor Hayes’s Richard make much of an impression, several of their colleagues replace whatever tidbits of charm their roles may have with farcical obnoxiousness.

Forte’s Mavis, for example, has a tendency to work every line and reaction for maximum effect—including far too often facing the audience directly—making us wonder what any of these men sees in her. Preece’s souped-up Victoria, guzzling flute after flute of Champagne, provides a demonstration of Mugging 101.

The biggest offender, both in the writing and performance, is Porter’s lightly accented caricature of Marcel, the Dane, his every onstage moment belying the guy’s being a professor of poetry and philosophy, especially one who (he admits this!) lost his job for inappropriate relations with a coed. Marcel also seems far younger than Mavis, a disparity never mentioned.

As exaggeratedly costumed (by Napoliello), he prances about in hipster-style skinny jeans, a maroon sports jacket, and a fluffy ascot, exasperatingly bowing with an 18th-century courtier’s formality whenever introducing himself, and bursting into “Wonderful Copenhagen” (which Danny Kaye introduced in the movie Hans Christian Andersen) whenever the spirit moves him. Like Prim, he never loses an opportunity to note American obtuseness, but he’s straight out of the playbook of 19th-century comedies that similarly satirized foreigners. Today, he seems ridiculously offensive.

Napoliello’s set, decently lit by Ross Graham, remains the principal contribution. His costumes—including three tuxedoes—are more-or-less acceptable but you can’t help wonder why, if there’s a snowstorm (“snowmaggadon,” someone says) raging, he provides no one entering from outside (except for Mavis’s obviously phony fur) with a winter garment. When, for example, is the last snowstorm you dressed for in a thin, zippered sweatshirt?

By the time it limps toward its lame conclusion, with Richard and Dick (actually, both are dicks) cozying up as best buds, you want to draw a big X through The Exes.