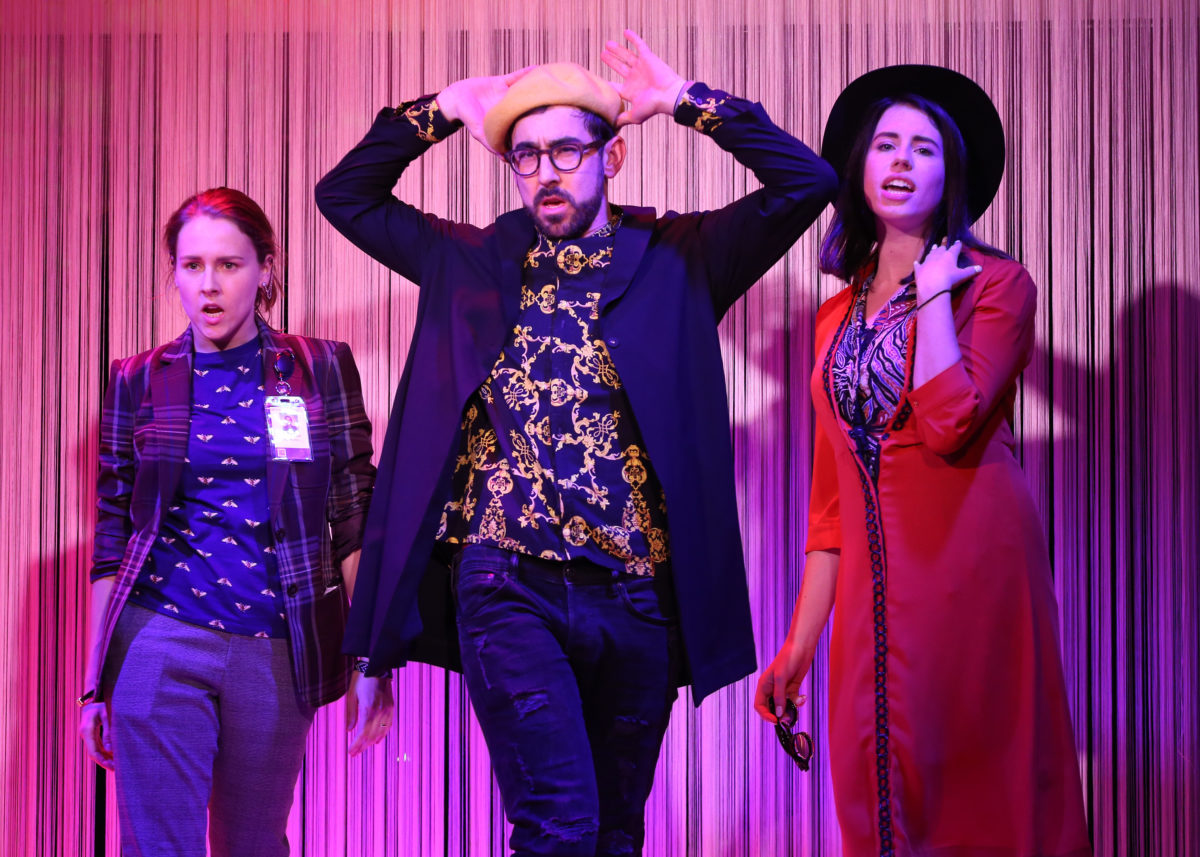 The theatre is Nancy Manocherian’s the cell, an intimate 23rd Street venue that suggests the foyer of a 19th-century townhouse—equipped with a loft-like balcony—in which the audience sits on uncomfortable wooden seats of different heights to overcome sightline problems. Its flexible space has been arranged by Libby Stadstad so that the audience surrounds a narrow, raised runway on three sides.

Nearly everything on stage is white, including the fringed curtain beneath the balcony at the far end behind which sits the three-member band (cello, guitar, and piano). Props are symbolic, like the white boxes that serve multiple purposes. Overhead is a striking, transparent, plastic mobile evoking the city’s skyline, lit to change colors by Chris Steckel, whose overall contribution is impressive. And Alan Waters creates some fine sound effects, notably when a Xerox machine is working.

The Evolution of Mann is (apart from a very late arrival) a three-hander about Henry Mann (Max Crumm, Grease), a 32-year-old “starving artist,” who’s writing a musical called The Green Light, based on The Great Gatsby. Henry, who (as seems almost inevitable in such shows) is Jewish—and comes supplied with a kibitzing Jewish mother (Allie Trimm)—carries a torch for the love of his life, Sheila, who jilted him.

Henry, who has gone to 12 weddings in 12 months, decides to show Sheila what for by finding someone to marry himself. Aiding in his desperate quest is Gwen (Leslie Hiatt), his lesbian best friend and roommate. An experimental theatre actress-playwright, she’s also preoccupied with trying to get back with Diane, her wife, who walked out on her.

Gwen helps Henry get a date with an attractive, cultured, artsy friend, Tamar (Allie Trimm), a publicist, whose relationships with men are not too promising. The desperate Henry, instantly thinking he’s found Ms. Right (she even likes the idea of his Gatsby musical), quickly finds he’s wrong, and turns instead to Christine (also played by Trimm). She’s a student teacher who, like Gwen and Henry, works part-time as a legal assistant at a law firm. Overcoming his initial hesitation because of her unibrow, Henry dates Christine and things look promising until Tamar turns up again.

As these all-too conventional developments evolve, the focus sometimes turns to Henry’s mother, to the young yoga-practicing woman Gwen and Henry spy through her window, and to phone calls from a mysterious woman saying “I wanna do you on the dining room table.”

Under Joe Barros’s brisk, minimalist staging, sometimes done with choreographic precision, the transparently artificial plot works itself out as we view bits from both Gwen’s ridiculous play, in which she portrays an amoeba, and Henry’s awful Gatsby show. We also visit a Lower East Side dive bar (“Further east than Cambodia,” Henry unwittily quips), where Christine, of all people, turns up to perform a song, and a basketball court where Henry’s predictable, presumptive soulmate shows up just in time for the curtain.

When one of the nearly hour and a half show’s 14 songs isn’t being sung, music often accompanies the dialogue. It’s pleasant enough on the ears but the melodies, most on the upbeat side, are largely in a generic, pseudo-Sondheim mode, too many being sound-alikes. Cohen and Elish’s lyrics are usually better than the music, perhaps the best example being “The Unromantic Things,” whose title notes, with irony, where it is “you find what’s pretty and romantic.”

Here and there The Evolution of Henry Mann offers a gentle charm offensive, as when Christine and Henry read and sing his children’s poem, “Benjamin Potter the Otter,” but more frequently the bits, especially the humorous ones, land with a leaden thud. The characters are paper-thin, with Henry—so desperate to have a wife a single date is enough to think he’s found a bride—coming off as something of a jerk. Oddly, never once do any of the cell phone-using characters suggest the possibility of finding love through social media, alluded to even in a recent updating of Company.

As Henry, Crumm sings very nicely but falls short in the charisma department, and he’s saddled with an innocuous plot device requiring him to look like a downtown, bohemian artist by wearing a silly yellow beret, and a tacky black and yellow shirt, one of designer Siena Zoë Allen’s weaker choices. Hiatt is modestly enjoyable as Gwen, but Trimm, who might have done well by either Christine or Tamar, lacks the versatility to give each a distinctive personality, much less express the humor of Henry’s stereotypical mother. Nor, by the way, is she well served by Allen’s rather homemade-looking costumes.

At one point, Tamar tells Henry that, in writing a show, one must take risks and “think outside the box.” Paradoxically, The Evolution of Mann is still in the box. With its lid firmly in place.