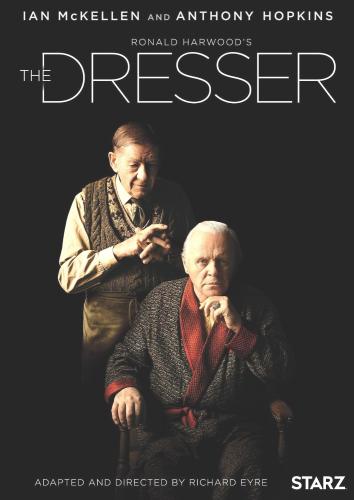 In quite a coup, McKellen, in the title role, and Hopkins as exasperating and dedicated actor/manager “Sir,” are starring together for the first time. The play takes place during WWII and England’s darkest hours in a small regional theatre as a plucky rep troupe prepare to stage King Lear. Both are acclaimed for their own stage roles as Shakespeare’s tormented king – Hopkins in 1986 at the National Theatre, under David Hare’s direction; McKellen in Trevor Nunn’s 2007 production for the Royal Shakespeare Company.

With two of today’s most acclaimed actors, whether onstage or onscreen, you’re assured of tour-de-force performances. The indefatigable McKellen is irascible and irresistible as he highly compliments and is complimented by Hopkins in his finest role in years.

McKellen, calling The Dresser “cunningly written,” has noted that he “scored a royal flush when it comes to finding the perfect costar.  “When my agent rang and told me that Tony was to portray ‘Sir,’ I didn’t hesitate a second. I said, ‘Yes’!”

He and Hopkins agreed that “really good actor make you act better yourself.” As in the play/film, “Sir” and Norman are tied at the hip, each knowing the other more than they know themselves or what they are capable of doing in desperate moments. McKellen was amazed at Hopkins’ energy. “I just plugged into it.” 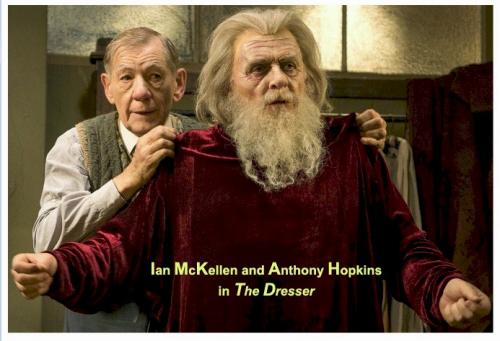 The TV production is directed by Richard Eyre, who directed the National’s 1997 award-winning production. The DVD features are two shorts, From Stage to Screen and Master & Assistant, both with the potential to be quite interesting but in a huge shortcoming for this release so short they register as a blink.

Against a backdrop of air-raid sirens wailing and night-bombing by the Germans, the curtain is to go up in an hour. However, the pompous actor/manager called Sir, though never officially tapped by Her Majesty, is nowhere about. Dresser Norman and the tired, quietly miserable “Her Ladyship,” portrayed by Oscar-nominee Emily Watson, long reconciled to “Sir”’s fallandering ways and flights of fancy, hope against hope that he’ll turn up.

With time ticking away to the call for places, Sir arrives with self-important swagger but in such a frazzled state of  mental and physical decline and battling demons and notions of grandeur, that “Her Ladyship” and long-suffering, deeply devoted (and more) stage manager Madge, in a stunning, multi-layered performance by Sarah Lancashire, decide the performance should be canceled. But word is out that the performance is sold out – or is it just a ploy to get this self-crowned head of theater immortality into costume.

Fussy Norman, in a several decades long all-consuming co-dependency with “Sir,” assures all that all will end well. Fortified by nips from his flask, he sets about his nightly challenge of getting Sir into the right costume and make-up as well as constantly focusing him on the role he’ll be playing and not that other Shakespeare play.

It becomes a cat-and-mouse game of will he and can he rise to the occasion. Lurking in the background is veteran actor Edward Fox, so gaudily made-up as the Fool that he’s unrecognizable. Later, out of make-up, he has a shining moment as that background actor always trying to convince the director he’s capable of doing more.

Dresser executive producer Colin Callender for Playground Entertainment says: “There’s a rich tradition of British television honoring great British plays and presenting audiences with virtuoso renditions onscreen as the playwright wrote them. The single drama is an endangered species in film and TV. This production harks back to the great days when quality drama was brought to the screen. It’s also testament to the enduring power of Ronald Harwood’s glorious writing that we have been able to bring together such a wonderful cast from the worlds of film, television and theater.”

Harwood, after attending the Royal Academy of Dramatic Arts, joined the Shakespeare company of actor/manager Sir Donald Wolfit, where for five years he was his dresser. His experiences working with Wolfit inspired The Dresser. He also authored Sir Donald Wolfit CBE: His Life and Work in the Unfashionable Theatre.

The current production reverts to Harwood’s original text, when first produced in 1950 at Manchester’s Royal Exchange Theatre; and a month later on London’s West End. It starred Tom Courtenay as Norman and Freddie Jones as “Sir,” and was nominated for a Society of West End Theatre Award (now, the Olivier) for Best Play.

The Dresser was first adapted for the screen by Harwood in 1983, headlined by Courtenay and Albert Finney and directed by Peter Yates — with Zena Walker as “Her Ladyship,” Eileen Atkins as Madge, and Fox as Oxenby. Courtenany and Finney were Oscar, Golden Globe, and BAFTA-nominated – with Courtenay winning Golden Globe’s Best Actor in a tie with Robert Duvall in Tender Mercies.

The play opened on Broadway in1981, with Courtenay repeating his performance as Norman and Paul Rogers as “Sir.” It was Tony and Drama Desk-nominated for Best/Outstanding Play, with Rogers winning a Drama Desk for Outstanding Actor, Play. It ran for 200 performances.

Harwood has long had a fascination with the stage. His After the Lions is based on the career of diva Sarah Bernard; and Quartet, on the world of aging opera singers, which was Olivier-nominated in 2000 for Best New Comedy and adapted for the screen directed by Dustin Hoffman and headlining Dame Maggie Smith, Courtenay, Billy Connolly, Pauline Collins (Shirley Valentine, among many other acclaimed roles), and Michael Gambon. He won an Oscar and was BAFTA-nominated for his adapted screenplay for Oscar-nominated Best Film The Pianist from Wladyslaw Szpilman’s novel; and authored the non-fiction book All the World’s a Stage.

Director Eyre, a former college president, regional theater director, and author, was the National’s artistic director from 1987-1972, where he commissioned and directed numerous acclaimed classical and contemporary works, including a revival of Guys and Dolls. He’s also adept at staging operas at the Met and international houses.

On the West End and Broadway, he directed Disney and Cameron Mackintosh’s Mary Poppins, was nominated for Tony and Drama Desk Awards in 2002 for his Crucible revival; a 1997 Tony nomination for David Hare’s Skylight, which was originally produced at the National; and a 1994 Tony for Best Revival for Lincoln Center Theatre/National Theatre’s Carousel, directed by Tony and Drama Desk winner Nicholas Hytner.