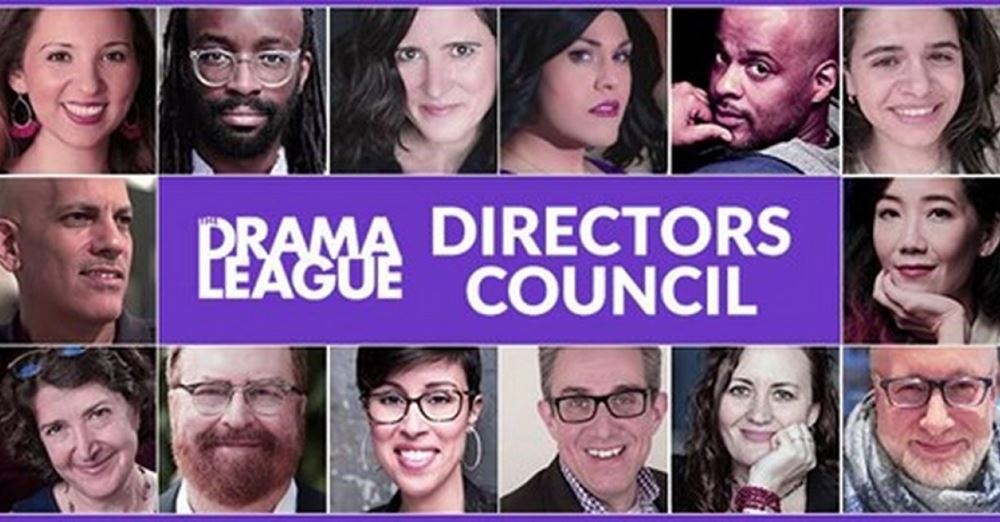 For over 100 years, The Drama League of New York has been at the forefront of the American theater community, advancing the art form by providing a life-long artistic home for directors and a platform for dialogue with, and between, audiences.

This new Directors Council is composed of award-winning directors and creators from across the country, in theater and its related mediums, who have participated in The Drama League’s director- focused programming in the past, and have committed to providing counsel, guidance, and partnership to the organization moving forward. The Directors Council, born out of the organization’s comprehensive strategic planning in 2019, was formed as a way to further embed artists in the decision- making process of The Drama League, establish peer-to-peer mentorship for Fellowship recipients, and to have the nation’s leading directors guide The Drama League’s programming initiatives as the organization expands its mission to support directors and lead in the re-emergence strategies of Broadway and the American theater industry.

“As the American theater emerges in 2021 from the COVID-19 pandemic, the incredible artists of the Directors Council will inform and partner in our efforts to create a revivified field and a better institution — one that further embraces anti-racist practices, equitably supports BIPOC artists, improves the lives of its communities, and leads the world in healthy practices,” said Artistic Director Stelian-Shanks.

“I am thrilled to have been asked to be a part of the Directors Council at the Drama League. Fresh from college I was invited to be a part of the 1987 Directors Project, and that experience — the artists I collaborated with, the senior directors who mentored me, the way I was welcomed into a community — launched me as a creator and as a person. I look forward to giving back to the many directors just coming into the field, and to working with the Drama League to provide an artistic home for all directors, regardless of where in their careers they might be” said Directors Council member Tony Phelan.

Melia Bensussen (she/her/hers) became Artistic Director of Hartford Stage in 2019. The recipient of an OBIE Award for Outstanding Direction, she has directed extensively around the country and internationally. Raised in Mexico City, Melia is fluent in Spanish and has translated and adapted a variety of works, including her edition of the Langston Hughes translation of Garcia Lorca’s Blood Wedding, published by TCG. A past recipient of a Princess Grace Fellowship, she was awarded the Foundation’s top honor, the Statue Award. She is on the faculty at Emerson College where she previously served as Chair. Chair of the Arts Advisory Board for the Princess Grace Foundation. Secretary for the Executive Board of the Society of Directors and Choreographers (SDC). Brown University. DL Fellow 1986.

Jillian Carucci (she/her/hers) is a director and educator focused on creating quality theater for young audiences and nurturing the growth of early career artists. At TheaterWorksUSA, she currently oversees artistic and education programs in addition to casting up to 30 musical productions, workshops, and readings each season. She has worked off-Broadway and regionally and theaters such as: McCarter Theatre Center, Hangar Theatre, Atlantic Acting School, Keen Company, and Mile Square Theatre. BFA Musical Theatre faculty at CAP21/Molloy College. DL Fellow 2017.

R.J. Cutler (he/him/his) is an award-winning director and producer renowned for documentaries including “The War Room,” “A Perfect Candidate,” “The September Issue,” “The World According to Dick Cheney,” “Thin and Listen to Me Marlon.” A pioneer in nonfiction television, R.J. created landmark programs including “American High,” “Freshman Diaries” and “30 Days,” among others. Cutler’s scripted work includes “Nashville,” “If I Stay,” and the award-winning podcast “The Oval O`ce Tapes.” Upcoming projects include the feature documentary “BELUSHI” on Showtime and the highly anticipated Untitled Billie Eilish Documentary for Apple TV+. Cutler’s documentary series “Dear…” is currently streaming on Apple TV+, and his musical drama “Bronzeville” has been ordered straight-to-series by Showtime. Cutler has been nominated for an Academy Award® and is a two-time Emmy® nominee. DL Fellow 1984.

Raz Golden (he/him/his) is a director of theatre, film, and voice over. He is a Resident Director at The Flea, a member of the Roundabout Directors Group, and was a Drama League Classical Directing Fellow. His current work focuses on new and classical texts, as well as narratives that explore shared cultural histories and myths and center people of color. He has developed work with The National Black Theatre, The Public Theatre, NYU Tisch, Hudson Valley Shakespeare Festival, Waterwell, Dixon Place, and McCarter Theatre. DL Fellow 2019.

Brian Eugenio Herrera (he/him/his) is a writer, teacher and scholar who examines the history of gender, sexuality and race within and through U.S. popular performance. He is author of Latin Numbers: Playing Latino in 20th Century U.S. Popular Performance (Michigan, 2015), which was awarded the George Jean Nathan Prize for Dramatic Criticism. He is also Inaugural Resident Scholar for The Sol Project, a longstanding contributor to the Fornés Institute, and part of the Core Facilitation Team with ArtEquity. Brian is Associate Professor of Theater and Gender & Sexuality Studies in the Lewis Center for the Arts at Princeton University. DL Fellow 1990.

Adam Immerwahr (he/him/his) is the artistic director of Theater J, the nation’s leading Jewish theater. He served as the associate artistic director of McCarter Theatre (Princeton, NJ) and the resident director of Passage Theatre (Trenton, NJ). Adam served on the producing team of multiple productions that have transferred to Broadway and Off-Broadway, including the world premiere of Christopher Durang’s Vanya and Sonia and Masha and Spike. As a director, his work has been seen across the world, from Aspen to Zimbabwe. He has directed off-Broadway and at many of the nation’s premier regional theaters, such as McCarter Theatre, Walnut Street Theater, Cleveland Play House, Woolly Mammoth, and many others. He currently serves on the board of the Alliance for Jewish Theater. DL Fellow 2008.

Tony Phelan (he/him/his) After joining “Grey’s Anatomy” at the start of season 2, Tony Phelan and his wife Joan Rater rose through the ranks and co-ran the show alongside creator Shonda Rhimes for seasons 7 through 10. For their work on “Grey’s Anatomy” they earned a WGA Award for Best New Series in Television in 2005 and were nominated for two Emmy Awards in 2006 and 2007, both for Outstanding Drama Series. Since 2016, Phelan and his wife have been developing and running their own shows including “Doubt” for CBS and “Council of Dads” on NBC. The husband and wife team enjoyed a successful Off-Broadway run with their stage play Good Will at The Director’s Company in 1998, which The New York Times gave a rave review, hailing it as “touching and thought-provoking.”  Yale University. DL Fellow 1987.

Lisa Portes (she/her/ella) is an award-winning Chicago-based director, educator, leader and advocate whose aim is to define and promote a new American theatre that is driven aesthetically and politically by the world we are becoming rather than the world we’ve been. She is a co-founder of the Latinx Theatre Commons and serves on the board of the Theatre Communications Group (TCG) and the executive board of  the Stage Directors and Choreographers Society (SDC).  She heads the MFA Directing Program at The Theatre School at DePaul University. Her work has been seen at numerous theatres in Chicago and regionally. DL Fellow 1992, 1997.

Gabriel Stelian-Shanks (he/him/his) is the Artistic Director of The Drama League of New York and a founder of A Certain Something. He has directed over sixty theater, film, and television projects across the United States and Europe, and is the author of eighteen plays, two screenplays, and a television series.  An alumnus of the Orchard Project, nominee for Best Director at the Madrid International Film Festival, and recipient of the Theatre Project Honor for Outstanding Vision, he has been recognized for his arts leadership by the D.C. Commission on the Arts and Humanities.  One of the directors of Peculiar Works Project’s The Village Fragments (OBIE Award), his productions have been seen in New York, Seattle, Washington DC, Baltimore, Atlanta, Philadelphia, Chicago, Vienna, Sofia, Bucharest, and Budapest, among others.  Recently, his monodrama, DIASTREPHO, premiered as part of Stonewall 50: WorldPride at the LGBT Center of New York; this month, his film “The Damnable Deprivation Of Dmitri” premieres as the Opening Selection of the New Masculinites Festival.  Proud member SDC, IFP.

ABOUT THE DRAMA LEAGUE:

Through our work, The Drama League celebrates the important role theatergoers have to the future of the industry, and champions the impact theater plays in civic life. The Drama League breaks the formidable barriers that impede success in the arts. These directors, nurtured and empowered by The Drama League’s support, are trained to create the most rigorous work possible, as a live exchange between artists and audiences. In doing so, we elevate the conversation, deeply impacting theaters and their communities. Bringing people together to celebrate difference, share experiences, and discover common ground are crucial needs served by the work of Drama League directors. This necessary cultural practice is the foundation of our shared humanity.