February 24, 2022: D.H. Lawrence (1885-1930), the deservedly admired British novelist, known for provocative works like Lady Chatterley’s Lover and Sons and Lovers, is far less well-known as a dramatist. His playwriting reputation, for what it is, stems largely from posthumous English stagings of his plays beginning in the 1960s. Only two of his plays were produced during his lifetime, and those were in off-the-beaten path venues. The Daughter-in-Law,Lawrence’s 1913 play now being expertly revived by the Mint Theatre (for the second time since 2003), reveals a talented playwright restrained from wider recognition by the parochialism of his language. 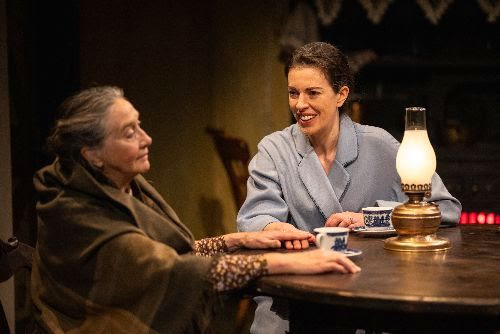 SANDRA SHIPLEY ( as Mrs. Gascoyne) and AMY BLACKMAN (as Minnie)

February 24, 2022: D.H. Lawrence (1885-1930), the deservedly admired British novelist, known for provocative works like Lady Chatterley’s Lover and Sons and Lovers, is far less well-known as a dramatist. His playwriting reputation, for what it is, stems largely from posthumous English stagings of his plays beginning in the 1960s. Only two of his plays were produced during his lifetime, and those were in off-the-beaten path venues. The Daughter-in-Law,Lawrence’s 1913 play now being expertly revived by the Mint Theatre (for the second time since 2003), reveals a talented playwright restrained from wider recognition by the parochialism of his language.

Although the Mint, whose mission is to resuscitate largely forgotten works, provides the play with incisive direction by Martin Platt (also responsible for the 2003 version), The Daughter-in-Law, set in the writer’s coalmining hometown of Eastwood, Nottinghamshire,  is unapologetically crammed with the argot and accents of the English Midlands. I read the script beforehand, but two thirds of the dialogue proved so thickly regional that much of the experience was more slog than snap. Even then, the performance, with authentic accents greatly helped by “dialect designer” Amy Stoller, made me long for subtitles.

MRS GASCOYNE: We know thee! Tha’s done thysen one i’ th’ eye this time. When dost think tha’ll iver get ter be a butty at this rate. There’s Luther nowt b’r a day man yet –

JOE: I’d as lief be a day man as a butty, i’ pits that ratgnawed there’s hardly a stall worth havin’, an’ a company as ’ud like yer ter scrape yer tabs afore yer went home, for fear you took a grain o’ coal.

And that’s an easy one.

For what it’s worth, the program offers a glossary, where you’ll learn words like my favorite, “clat-fart,” which means “gossip.”

Yet, oddly, despite the struggle to follow this crudely naturalistic, yet poetically vivid prose, the principal plot points seep through; several big scenes where the words are less opaque also help considerably. Further, the characters and their motivations, as distinctively acted, capture and sustain your attention over the course of the five-scene, two-and-a-half-hour performance. Lawrence’s drawn-out plotting is not particularly deft, and some of his choices can be questioned, but he definitely knows how to inspire dramatic confrontations, several of which jump to fiery life.

The action is set in two locales. In the background, the historically noteworthy coalminers’ strike of 1912 is brewing, with the bosses bringing in soldiers to defend their interests.  First, we’re in the home of the widowed Mrs. Gascoyne (the dominatingly matriarchal Sandra Shipley), where she lives with the youngest of her six sons, the carefree Joe (Ciaran Bowling, driven), a miner. Joe has one arm in a sling because of a pit accident for which his own foolishness is responsible, thus robbing him of compensation.

A neighbor named Mrs. Purdy (Polly McKie, excellent) visits to report that another Gascoyne son, the recently married Luther, also a miner, has gotten her naïve daughter, Bertha (unseen), with child. Mrs. Purdy wants 40 pounds to cover up the situation (she’ll blame it on some transient workers recently doing work nearby). This news becomes the play’s principal preoccupation, but its initial impact gradually fades as other issues gradually take precedence.

Then we move to the home of the bad-tempered, self-loathing Luther (a fiery, coal dust-covered Tom Coiner), and his bride of seven weeks, Minnie (Amy Blackman)—allegedly inspired by Lawrence’s mother—who, like Minnie, married beneath her, as the expression goes. Minnie proposed to Luther when no one else was interested, his acceptance partly swayed by her nest egg. This establishes a class-conscious tension between the mother-in-law and daughter-in-law, each of whom has some reason to be jealous of the other.

Minnie is brilliantly imagined by Ms. Blackman, a mistress of exquisite nuance, who’s reason enough to buy a ticket. She has several exceptional moments, as when she defies Mrs. Gascoyne, slicing and dicing her for manipulating her boys with what Sidney Howard would later call a silver cord.

While The Daughter-in-Law uses Minnie to favorably represent strong women who stand up for their domestic rights, it ends by showing her in a light that seems inconsistent with the character we’ve been watching, especially in view of something terrible Luther does. Also, her dialect raises a question. Ms. Stoller, the dialect specialist, says that “while Minnie’s accent is local,” she uses standard grammar and vocabulary. Given the role of accents in the British class system, one wonders whether the class divide might have been more clearly accentuated by having her sound more posh.

The relatively wide acting space downstairs at the City Center Stage II has been nicely filled by Bill Clarke’s set, which isolates the Gascoyne household at stage left, filling the other side of the stage with a black brick wall bearing a couple of doors, as if it were the street outside. The shift to the home of Luther and Minnie is effected by sliding the wall offstage, expanding the original interior, and using a crew of costumed stagehands (kudos to designer Holly Poe Durbin) to rearrange the décor in dim light as original music—thanks to Lindsay Jones—plays. This approach, used throughout, works smoothly and keeps the shifts from bogging down.

Lawrence’s play is interesting for what, in 1913, would have been considered a fairly frank situation had the play been produced: the candid discussion of an illegitimate pregnancy by the woman’s mother with her lover’s mother and brother, and the consequent talk about it between the lover and his wife, all of it treated without moralistic breast-beating but from a purely pragmatic point of view.

A leading British critic once called The Daughter-in-Law “One of the great British dramas of the 20th century,” an example of the hyperbole of which the critical fraternity is often guilty. I’d prefer to say that it’s an interesting relic of a time and place, limited in appeal by its often impenetrable language, but invested with psychological acuity and several strong dramatic scenes well enough acted in this fine production that serious theatregoers might venture to give it a try.