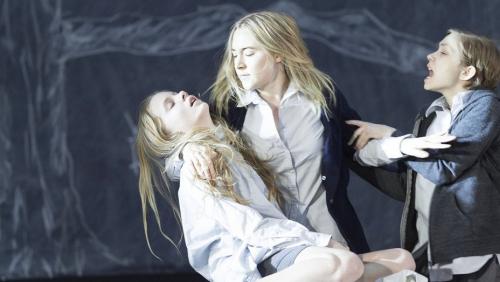 Van Hove eschews traditional, literal staging for a modern-dress allegorical setting while Zeller’s work, translated by Christopher Hampton, purposefully confounds and confuses as it recreates the experience of losing your grip on reality which many experience as they advance in years. Both productions can be baffling and upsetting but they push us into dark, scary places as all effective drama should.

This is the sixth Broadway Crucible, Miller’s 1953 indictment of rigid politic conformity, employing the hysteria of colonial Salem as an example of unthinking fear overturning common decency. It is also a great favorite of community and academic companies (I even played the Reverend Parris, the sanctimonious spiritual leader of the community, in college). But forget about the usual pilgrim hats and wooden cabins you get with most stagings. As he did in his production of Miller’s A View from the Bridge seen earlier this season, van Hove strips the play down to its essence. Unconcerned with props or period accuracy, the innovative director places the action in a drab schoolhouse (his frequent collaborator Jan Versweyveld created the imposing environment) and costumer Wojciech Dziedzic dresses the Salem residents as modern PTA members and students.

At the time of its opening, the play was seen as a metaphor for the ruthless Communist-baiting tactics of Sen. Joseph McCarthy and his ilk, but van Hove has broadened its scope so that its message can be applied to any repressive regime in any age. He has added special effects, Tal Yarden’s frightening video designs and a creepy, haunting score by avant-garde icon Philip Glass. The spooky turns are just frightening enough to suggest they come from within the minds of the characters who genuinely believe there are Satanic forces among them. But the flying girl and shattering windows do not overwhelm the action.

At heart this is the story of rough but basically noble John Proctor, a simple farmer who refuses to falsely confess to witchcraft in order to save his life. Reed-thin Ben Whishaw is the last person you would think of for this role, but he infuses it with a solidity and weighty moral authority belying his slender frame. Sophie Okonedo is equally moving as his wrongfully accused wife Elizabeth. Saoirse Ronan deftly provides the counterweight of selfish ego as Abigail Williams, the girl leading the cry of demonic mischief in order to cover up her carnal longings for Proctor. Ciaran Hinds is the heavy, imposing voice of authority as Judge Danforth while as Reverend Hale, Bill Camp ably represents the quavering conscious of those who allow evil to be done in the name of expediency. The magnificent cast also includes Tavi Gevinson’s rattled Mary Warren, Jason Butler Harner’s self-serving Reverend Parris, Brenda Wehle’s saintly Rebecca Nurse, and Tina Benko and Thomas Jay Ryan as the envious and malicious Putnams. All make this a fiery and scalding Crucible.

While The Crucible burns, The Father freezes as its central theme slowly creeps up on you. Florian Zeller’s 90-minute play is just as frightening as Miller’s work, but rather than political horror, Zeller examines the inevitable demise of the human mind. The premise is deceptively simple. Adrian, a formerly robust and domineering engineer now in his 80s, is deteriorating mentally as his put-upon daughter Anne must find a means for his care, either live-in help or a nursing home. The action is all seen from Adrian’s point of view as his gradual slipping down is dramatized in a series of increasingly bizarre scenes. The furniture in Scott Pask’s elegant apartment setting constantly vanishes and reappears, different actors play the same people in Andre’s life, and flashes of light like bursting synapses illuminate blackouts in a disturbing simulation of the protagonist’s disorientation.

Frank Langella in The Father

We don’t know the difference between what is really happening and what is in Andre’s mind. Information is changed, rearranged and twisted. Is Anne living in London with her new boyfriend or in Paris with her dad? Did she just bring home a chicken for dinner or is it breakfast time? Is that her husband or Andre’s doctor? We never know for sure and neither does Andre.

Frank Langella, who has played such towering figures as Sherlock Holmes, Sir Thomas More, Richard Nixon, King Lear, and Count Dracula, is shatteringly small-scale as Andre, clutching desperately at his disappearing dignity. His transformation from grandiose tyrant to babbling infant is full of terror and pity. Kathryn Erbe is appropriately and beautifully restrained as the eternally patient Anne. Doug Hughes’ staging is slick and smooth, but also deeply affecting as the rug is forever being pulled out from underneath the audience. It’s a harrowingly real hour and a half on usually bouncing, fun Broadway.