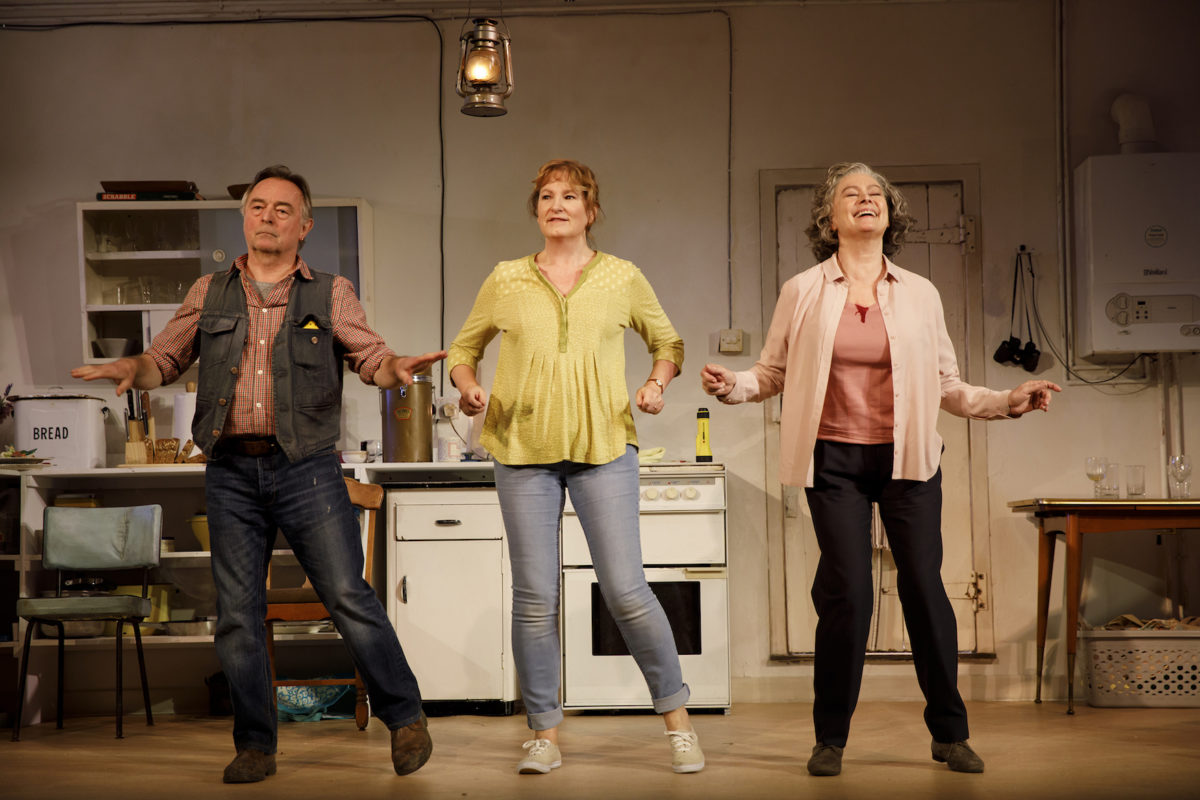 For the most part, their conversation is banal, a kind of endless, drawing room banter that prevails, even when the conversation turns to the disaster. Rose asks about it – an apocalypse of sorts.

As Hazel describes it, the kitchen was shaking, the road cracked down the middle, the sea looked like boiling milk, and there is talk of radiation hanging in the air. The cottage, too, as designed by Miriam Buether, is tilted from the eroding earth. And there is talk of the terrible smell!

While the disaster closely resembles the meltdown of the nuclear power plant in Fukushima, it feels remote. It’s the words that hang in the air here – not the sense of urgency of a nuclear power plant exploding down the road.  In fact, it takes a while before we can understand why these people are connecting at all, after all these years.

Finally, Deborah’s husband Robin gets home from feeding the cows –  in his retirement, he’s taken on the very demanding job of running a farm, he tells Rose. The triangulation that occurs sparks a sense of absurdity, reminiscent of Albee’s Who’s Afraid of Virginia Woolf?, or Pinter’s Old Times.

Indeed, their behavior becomes as childish as it is childlike. Rivalry between the two women over Robin leads to lots of acting out – a recurrence from the past. In the midst of it, Robin rides a tricycle around the kitchen, and the three of them dance to the rock ‘n roll of their youth.

Clearly now we see that it is the disaster that has brought Rose back to the place where they had all worked and lived, building the nuclear power plant that is now pushing the world to the edge of extinction. Amidst the focused realism of this production, imported from London’s West End, the surreal emerges. Video projections (by Peter Mumford) of tsunami-like waves batter the world outside the cottage.

To Kirkwood’s credit, the ending leaves us with nothing much more than our own uncertainty. Will Rose succeed in her mission to shut down the nuclear power plant, at the expense of her own life and theirs, or will they sit back and get killed from the radiation pouring into the environment?

Truly it is a quintessential question of our age and as presented here, it’s simply up in the air. Maybe we’ll pull through, but the possibilities appear slim, and the commitment to saving the world hard to muster.

Whether you’ve travelled to a tropical island, or watched the weather reports about Maria, Irma and the other nasty girls rattling these small and unprotected isles, you may find the opening of this musical a little too familiar. Fortunately, it is far from that.

As in Romeo and Juliet, or the more modern version, West Side Story, Ti Moune (Hailey Kilgore) and Daniel (Isaac Powell) come from two different worlds that were never meant to meet. “The peasants labor. The grands hommes eat!”

But the outcome here transcends the fatalism of those romances. Spirituality of a nearly pagan sort, with the trees and the wind creating the music of the gods, intervenes to save them – each in their own way – that is.

Opening on a catastrophic flood, sand, detritus, a live goat, chicken, people in torn beach wear, and the remnants of homes and sailing vessels, designed by Dane Laffrey, set the stage. A little girl, Ti Moune, (meaning little orphan) “torn from her mother,” survives the onslaught by hiding atop a tree. And she is saved by a loving older couple, who take her in in spite of their poverty.

At the core, however, the story is about the meeting of the two young lovers. As described, Ti Moune was set on her journey by the gods. A journey that will “test the strength of love…  Against the power of death.”

As directed by Michael Arden, the production, speaks to our senses with sound effects of birds and sea, as well as speeding cars and cocktail shatter. Workers sweep the sand off the oriental rug, as the littered beach turns into Daniel’s family’s elegant palace.

Similarly, Jules Fisher’s and Peggy Eisenhauer’s lighting brings to life the natural beauty of the tropics, along with the radiance of the cultivated social halls graced by the rich.

Indeed, the musical speaks to the necessity for social action and change – the need to break down the barriers between class, and race.  As is her wont, librettist/lyricist Lynn Ahrens, tells the story through song. Songs that are as functional in telling the story, as they are rife with beautiful imagery. “Who knows how high those mountains climb? Who knows how deep those rivers flow?  Who knows how wrong a dream can go, Ti Moune?”

Interestingly, the musical, a revival from 1990, is especially timely in its evocation of youthful heroism. Note the current popularity of the film Ladybird, and the success of the Netflix series, Stranger Things. In children we trust.