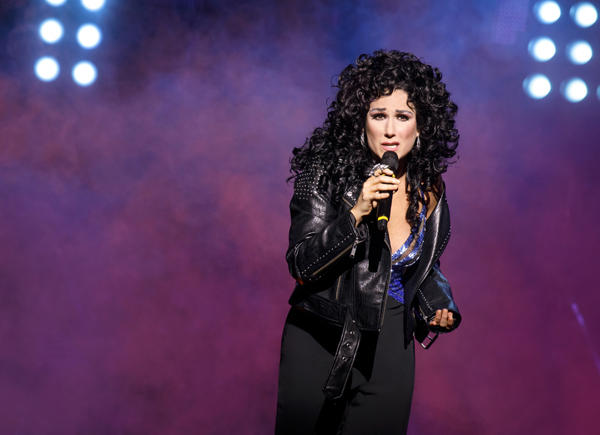 Yet the uneven book and the fabulous frocks are not all there is to this dazzling, ultimately entertaining glitz-fest. Jason Moore’s direction is lightning-fast, giving the proceedings the speed and flash of a Vegas concert, and the performances rise above the Behind the Music milieu of the story. Characters introduce themselves as if appearing for an interview (“I’m Robert Altman,” “Ladies and gentlemen, Miss Lucille Ball!”). Life messages are inserted like fortune-cookie wisdom (“The song makes you strong.”) Granted it’s a formidable task to cram 50-odd years of tumultuous on and offstage life into two and half hours, but Elice fails to give his subject the depth he brought to Franki Valle and the Four Seasons in Jersey Boys which he co-wrote with Marshall Brickman and is still running Off-Broadway.

Following in the sequined footsteps of Summer: The Donna Summer Musical, Cher divides its heroine in three with a different actress embodying various stages in her life. Babe (the powerfully-voiced teen Michaela Diamond) handles childhood with an absent father and a tough-as-nails, but loving mother (Emily Skinner at her flinty best), as well as the early years of her partnership with Sonny (Jarrod Spector who captures Bono’s distinctive whiny vocals and snarky charm). Lady (an energetic and sleek Teal Wicks) is the heroine finding her trademark sarcastic humor and challenging her domineering husband for artistic and personal freedom. Stephanie J. Block delivers a Tony-worthy performance as the third persona, Star, the fully formed Cher, transformed from a shy girl and wife into a warrior goddess. Block goes beyond impersonation—she sounds exactly like the mature subject—to impart the diva’s continuing insecurities and search for the strength to defy the industry’s constraints on women of a certain age.

Despite the rushed, shallow nature of the book, Cher contains more than its share of campy fun elements. As noted Mackie’s costumes are a gorgeous celebration of feathers, color, and outrageous fun (He even appears as a character in the person of delightful Michael Berresse). In addition, Christopher Gattelli’s choreography recreates the exuberant dances of all of Cher’s platforms from the TV shows to her concerts. The highlights of the entire production are a far-out fashion show and an exhilarating dance number to “Dark Lady” with a magnificently limber Ashley Blair Fitzgerald getting tossed around by muscular chorus boys. It’s kinda weird that the top two numbers in the show don’t even feature one of the three stars, but that’s The Cher Show—kinda off-base, a little skimpy on the book, but good for a silly laugh.

While The Cher Show doesn’t pretend to be anything more than a night of guilty pleasures and mainly succeeds, Christopher Demos-Brown’s American Son wants to be a deep, complex examination of an immediate, vital issue and comes up short. The playwright’s heart is in the right place, but the four characters in this 90-minute drama of race clashes and police overreach are more like representatives of viewpoints rather than flesh and blood. They speak to each other in talking points and editorial bulletins. Kenny Leon’s overheated direction turns the stage at the Booth and Derek McLane’s realistic police waiting-room set into a debate platform with convenient rainstorms timed to obviously reflect rising emotions.

Estranged couple Kendra (an intense Kerry Washington), an African-American psychology professor, and Scott (a stiff Steven Pasquale), a white FBI agent, are tensely awaiting word of their missing son Jamal in a Miami precinct. Rookie white officer Larkin (Jeremy Jordan balancing compassion with irritation) and African-American Lieutenant Stokes (Eugene Lee in the most subtle turn as a pragmatic, no-nonsense realist) treat each half of the pair differently dependent on their race, status and gender. Issues of racial profiling, law enforcement, and Kendra and Scott’s troubled relations surface and are vigorously argued, but we can hear the author talking rather than the characters. The cast does their level best to humanize the proceedings, particularly Washington who filters Demos-Brown’s stagey dialogue through desperate mother love and a laser-like focus on her objective of finding her son. The supposedly shocking climax is telegraphed and Jamal emerges as a symbol instead of a person, so American Son, even with its discussion guide in the program, emerges as a “teachable moment” instead of a moving drama.