The North American premiere of The Bodyguard opened Sunday at Milburn, NJ’s Paper Mill Playhouse, which was honored  with a 2016 Regional Theatre Tony Award. It stars multi-platinum R&B/pop record artist and film/TV actress Deborah Cox
(Broadway Aida and Jekyll & Hyde revival) as idolized singer/actress Rachel Marron, with Judson Mills (Film/TV, including Westworld and Walker,
Texas Ranger) as Frank Farmer, former Secret Service agent, now a
bodyguard for hire to the rich and famous. It is set to run through January 1.

The musical is the stage adaptation of the 1962 Warner Bros. hit
film, which starred Whitney Houston and Kevin Kostner. Following the Paper
Mill, Cox will embark on a national tour with the show. With such Paper Mill
productions as Newsies, Honeymoon in Vegas, and A Bronx Tale
moving to Broadway one might wonder if The Bodyguard will join that
roster.

Houston fans will be in heaven with the 16 mostly-chart topping tunes written by numerous pop composers. They include with
“I Will Always Love You” by Dolly Parton, a smash for Parton and Houston,
“Greatest Love of All,” “I Wanna Dance with Somebody,””I’m Every Woman,” “All
the Man that I Need,” “So Emotional,” “One Moment in Time,” “Saving ALL My
Love,” “Run to You,” and “I Have Nothing.” The tunes are cleverly placed
as concert numbers and book moments.

It’s a heavy load, but Cox has the pipes to deliver them, too. She’s not only has great stage presence, but also stamina. She’s rarely off stage during the two
hour abridgement of the film [with 20 minute intermission]. Amazingly, three
days a week she does matinee and evening performances.

When she’s given a break, audiences will be mesmerized
by the powerhouse voice of Jasmin Richardson, who plays Rachel’s sister Nicki,
who acts as her secretary and confidant but also has dreams of stardom. You may
recognize her from her Clinque ads or seen her on tour with Memphis and Dreamgirls.
Considering her very important featured role and stunning voice, it’s
surprising she’s not given special billing.

Mills is handsome and macho and adequately goes
through the paces, but with more stage experience he would really shine.
Chemistry is vital for Frank and Rachel to fall so quickly in love. Mills and
Cox work well together; but the vast Paper Mill’s auditorium and huge stage
[certainly larger than 90% of Broadway’s], work against each other in intimate,
romantic moments. 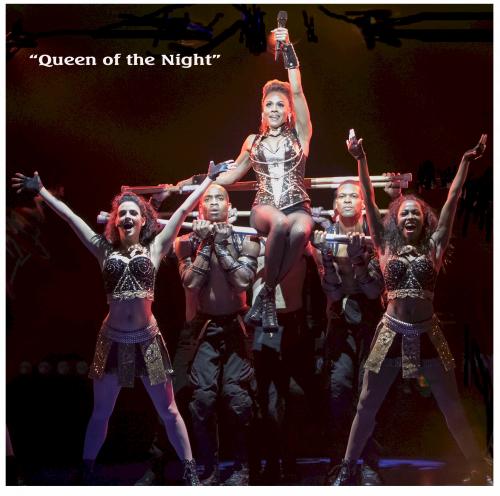 In addition to five featured cast members, which
includes the standout young Douglas Baldeo as Rachel’s son Fletcher
[alternating with him at several performances is Kevelin B. Jones III], there’s
an ensemble of 13.

The Bodyguard is a by-the-books adaptation of the screenplay. Frank is brought
aboard to protect superstar Rachel after she receives threats of bodily harm
from a stalker obsessed with her. We never find out why he is or what has
turned him so drastically against her. In one precarious moment, with Rachel
performing for avid fans, Frank spots the stalker, rushes to the stage, and
copying that iconic moment from the film and which is well-staged, sweeps her
into his arms and carries her off.

You might have expected more from Dinelaris. He does
create some suspense, but this romantic thriller never rises much above pulp
level or an extravagant soap-opera. Since it’s not the two-hour-plus film,
things have to move fast. Rachel and Frank are at odds one moment and before you
know it in a romantic entanglement. One of the show’s highlights is the date
Frank takes Rachel on. Instead of a busy café, as in the film, it’s a dive of a
karaoke bar, where she dares him to sing. Before we hear Rachel sing “I Will
Always Love You,” Frank, who admits he can’t sing a note, murders it. To prove
her credentials, she follows with “I Have Nothing,” which segues into a
big-belt, heavily-orchestrated triumph. 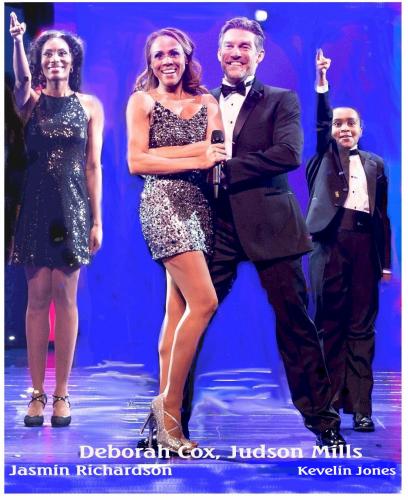 Into Act Two, Frank soon realizes he can’t have it
both ways – be in love and remain focused on protecting his star. He breaks off
the relationship – well, yes and no, as you’ll find out.

The stage version opens just as the film does – with a
jolting loud bang – gunshots ringing out that elicited quite a reaction from
the audience. Fans of the film will be quite startled by a quite drastic change
from the screenplay Dinelaris makes re: Nicki’s role. No spoiler alert. As in
the film, she’s also attracted to Frank, especially when she sees how Rachel
initially treats him because his strict security is denying her access to her
fans. He appears to be attracted to her. But who’s he there to protect and
serve? Nicki’s fervor grows along with jealously when she realizes he’ll never
be hers.

The orchestrations by Chris Egan, who has worked in all aspect of show business, are stellar. Music director/keyboardist Matthew Smedal conducts a seven-piece orchestra which often sounds like a full
symphony.

Paper Mill’s acoustics are great. But production musical supervisor Mike Dixon, musical supervisor Richard Beadle, and Sharrock have chosen
overamplification through banks of speakers which, with the addition of back-up
singers, makes it difficult to hear Cox in the production numbers. Luckily,
hopefully, a majority of the audience, especially the Houston fans, know the
tunes. The musical moments that really shine are the quieter ones, such as when
she sits at a piano or sings longingly of wanted to be loved for more than her
fame.

The Bodyguard has some startling gunfire and a few low-level risqué moments,
it’s fairly PG-13.

Paper Mill productions are made possible with support from the NJ
State Council on the Arts.