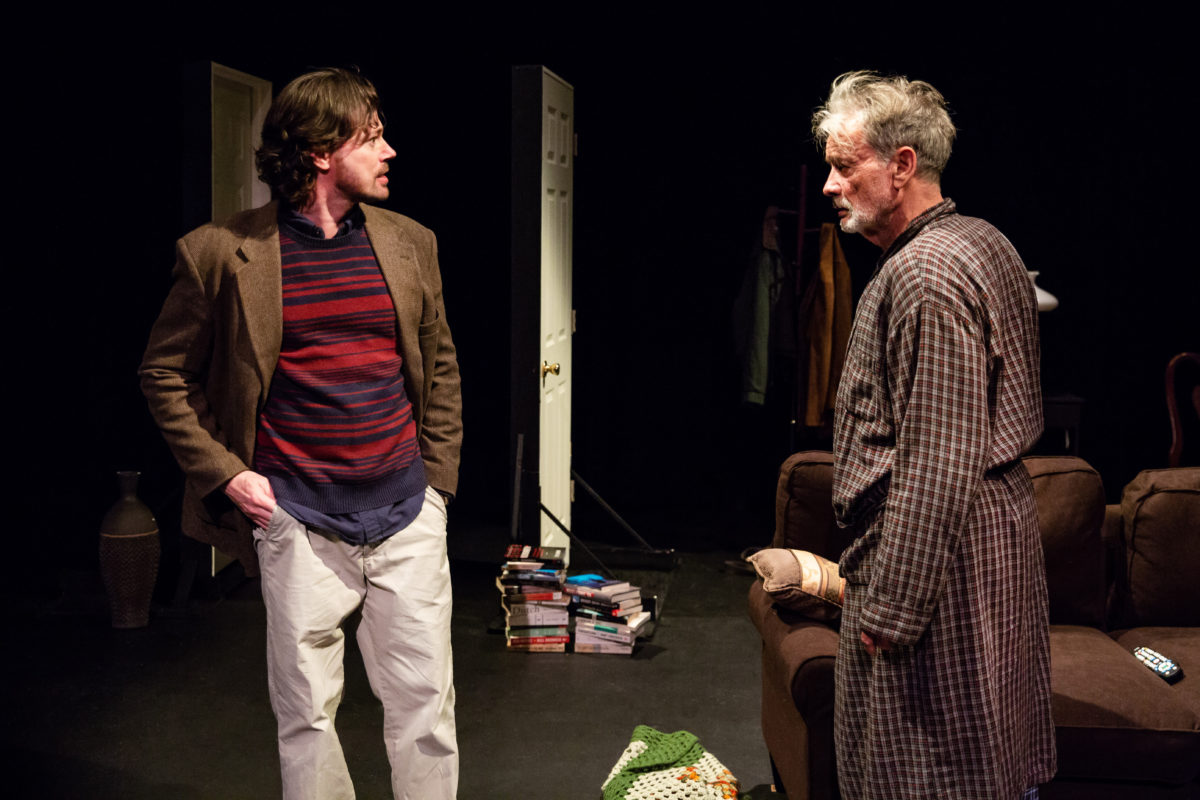 Whatever one thinks of its message about hope conquering hate, one needn’t be Oscar Hammerstein II to call it as corny as Kansas in August. Its characters are so one-dimensional they practically disappear when they turn sideways. Without the generally solid performances of its four actors, it would likely fly away on the next gust of wind.

The Mors’ program note points to the play’s basis in their personal experiences with discrimination, Eve’s being religious and Gabi’s cultural. As a child born in Poland to Holocaust survivors, she suffered physical and emotional abuse from anti-Semites who held an “us and them” mentality. She doesn’t explain Gabi’s experiences but says, “as you see in our play, we never lost hope.”

That mantra could perhaps be attached to their play, which was first produced Off-Off Broadway as the Manhattan Repertory Company in 2017, “was picked up by five theatres across the country for 2018), according to the program, and is now at Off Broadway’s Theatre at St. Clement’s. No producer is credited, suggesting that, perhaps, the hopeful Mors themselves are backing it.

All well and good. Their play, though, is a dramatically creaky, fitfully amusing, 90-minute soap opera about the residents of the same Brooklyn building, their apartments separated by a narrow hallway.  On our left is the neatly arranged living room of Paula (Jaimi Paige) and Aysha (Faiven Feshazion), an interracial lesbian couple. On our right are the disorderly digs of Jim (Stephen Payne, Straight White Men), a growly, old curmudgeon whose right-wing extremism makes Archie Bunker look like Bernie Sanders.

Designer Adam Crinson has provided not so much a set as a low-budget arrangement of furniture representing apartments on either side of the stage, placed against surrounding black curtains, with free-standing doors on either side of an imaginary hallway at center. Daniel L. Taylor has provided the efficient lighting and Barbara Erin Delo the everyday costumes.

Jim, who does little but watch “Fox and Friends,” rails without filters against blacks, Muslims, Jews, immigrants, homosexuals, the poor, and every other kind of “other,” while buying into the most insidious conspiracy theories. Even when we learn why he believes and behaves as he does, it comes straight from the melodrama playbook, with a superficial reasonableness masking an implausible explanation. Faced by such consistent obviousness, it’s impossible to suspend one’s disbelief.

His unmarried, previously estranged son, Seth (Dana Watkins, Edwin), a politically progressive history professor at Brooklyn College, is trying to find common ground with his ultra-bigoted father. Although he looks in on him once a week, he has difficulty calling him “Dad,” instead of “Jim.”

Exacerbating things for the bigoted grouch is the great pain his deteriorating kidney is causing. Seth says he hasn’t yet been tested as a possible donor and, since the search for a new kidney becomes a prime thread, we keep wondering why the hell not. (Hint: the plot wouldn’t work if he did.)

Across the hall, Aysha, black, is pursuing a doctorate in gerontology (the care of old people), while Paula, white, is a nurse. They’re both attractive and as sweet as sugar but the idea of marriage is still on the back burner.

Aysha, sensitive to racial slurs, is angry about their intolerant, aging neighbor; when she said “Hi,” in the elevator, he responded: “Why don’t you go back to Africa, where you belong.” Paula is a saint who, after Seth asks her to look in on his father, does so with an abundance of honeyed kindness, even when spitefully insulted by Jim—who calls gay women “carpet munchers”—for being queer.

For some unexplained reason, Jim, as anxious to keep the women out as Jon Snow is to keep the Night King away, never locks his door. In the long run, the audience benefits because there’s so much going back and forth from one apartment to the other it would greatly extend the play’s run time if every visit required either a knock or a key.

So, in this corner, the miserable, invective-spouting, antiblack, antigay, misanthropic Jim, who needs a new kidney, and his increasingly frustrated son who, instead of letting him rot, keeps trying to enlighten him; in the other corner, the loving lesbians, Aysha and Paula, whose ministrations Jim nastily rejects. Here’s where your playgoing ESP kicks in to tell you where this all is going.

Finally, the play concludes with the intimation of a happy ending. Oh, wait! Some may have begun clapping but it’s not over. In fact, following a brief, totally unnecessary scene, we get the actual finale, in which one loose thread after the other is sewn in place and everyone can join in a good, group hug.

The Bigot gets good work from the gray-haired, sandpaper-voiced Payne as the crotchety Jim; the nice-looking Watkin as the earnest but irritated son who finds saying “Dad” so tough; Feshazion as the skeptical gerontologist; and, especially, Paige as the remarkably patient, even Christ-like Paula, who turns one cheek after the other.

None of this is at all believable, the characters being almost allegorical, and the dialogue heavily didactic. The plot points are schematic contrivances: the skeptical black woman, living opposite the black- and queer-hating old man but ultimately involved in saving his life; her Mother Teresa-like lesbian lover, searching for a surrogate father, anxious to absolve Jim of his ignorant prejudices despite his adamant refusals; the son searching for love in an undeserving parent; the widowed father rejecting all human love and kindness so he can stew in his own paranoia; the kumbaya bringing them all together, demonstrating the power of hope.

Hope, Emily Dickinson wrote, is the thing with feathers. The Bigot, though,never gets off the ground.