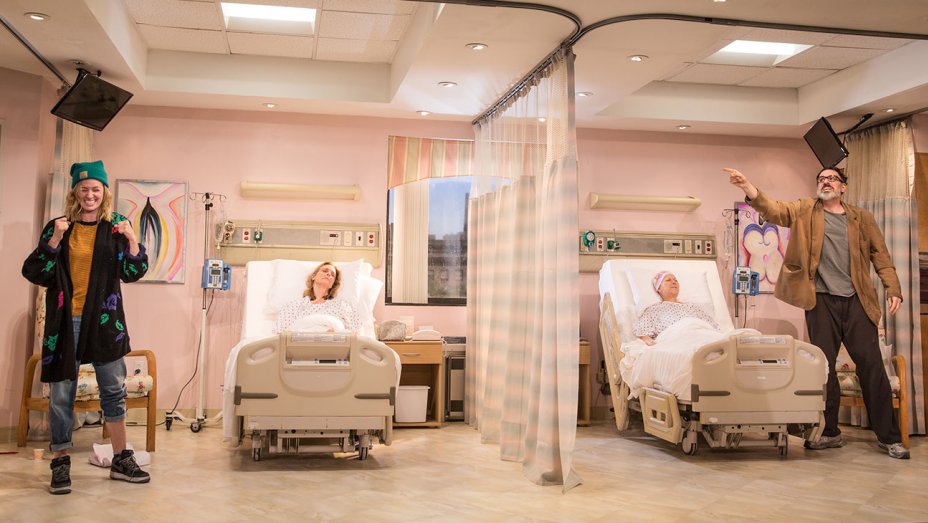 In her Manhattan stage debut, 2 Broke Girls’ Beth Behrs starred in Halley Feiffer’s A Funny Thing Happened on the Way to the Gynecologic Oncology Unit at Memorial Sloan Kettering Cancer Center of New York City. The title of the humdrum play set the tone for a show where many of the jokes flatlined, but Behrs’ performance as a young stand-up comedian visiting her verbally abusive, cancer-stricken mother, was outstanding and layered in its complexity.

Also making an excellent Manhattan theatre debut was Abigail Breslin in Erica Schmidt’s All the Fine Boys. Set in suburban South Carolina in the 1980s, the play follows two 14 year old girls (Breslin and the also excellent Isabelle Fuhrman) who experiment with love and sexuality. Though neither girl appears to be so young physically, Breslin was remarkably adept at making her Jenny’s naivete and curiosity equally heart-warming and tragic. Audiences hung onto her every word as she was as engaging in moments of tragedy as she was in spots of joy. In a scene that found Jenny losing her virginity, it was impossible for the audience to take its eyes off of the dead stare floating away from her face. Schmidt’s voice was natural and appropriately discomfiting; coupled with the challenge of directing Boys in Pershing Square Signature Center’s shoebox of a room, the Ford Foundation Studio Theatre, it’s clear that she has a knack for telling and creating an in-depth narrative. Male lead Joe Tippett also shone as a deceptive sexual predator, giving a performance that forced audiences to question what they were seeing.

Randy Graff received a Drama Desk Award nomination for her role in Richard Greenberg’s slow Long Island memory play, The Babylon Line, but she wasn’t the only actress to turn our heads. Maddie Corman glowed as Anna Cantor, a coffee-club housewife enrolled as a student in a creative writing class, led by the solid Josh Radnor as passive teacher Aaron Port. Aaron’s longing to be anywhere else but in front of a class of seemingly clueless adults could have turned off some audiences, but Radnor’s tone and presence didn’t allow for a write off.

In George Brant’s play with music, Marie and Rosetta, singers Marie Knight and Rosetta Tharpe are saluted for their superb gospel voices. The Atlantic Theater Company’s Linda Gross Theater hosted an acutely designed production centered on the singers’ first rehearsal in a Philadelphia funeral home…or so we think. As Knight, Rebecca Naomi Jones was especially transcendent, belting “Amazing Grace” in such an original fashion that it seemed to be a new hit song. The faux-church roof never heard such glorious notes as it did when Jones and Kecia Lewis (Rosetta) turned on their pipes. That being said, it was Jones’ emotional range and doe-eyed enthusiasm that stole the show.

The season saw a number of tremendous solo performances, so many in fact that there wasn’t enough space for all of them on any award slate. Judith Light punished herself repeatedly in an unforgiving look back at a secret she had fostered throughout her many years as a high school English teacher in Neil LaBute’s All the Ways to Say I Love You. Comedian Chris Gethard managed the difficult feat of finding the levity in his own debilitating depression when he wrote Chris Gethard: Career Suicide. His honest story-telling wasn’t so much a performance as a 90-minute sketch revealing his bouts with therapists, the reality of antidepressants, and an ongoing battle with suicidal thoughts. It was impossible not to find relatable moments in this well-paced piece. Lastly, what Will Eno’s preachy and ironically tiresome Wakey, Wakey lacked in content was made up for by Michael Emerson’s brilliantly moving performance as a man in his last hour of life overseeing his premature wake. As his health continued to deescalate throughout the play, audiences were able to take in his quickly atrophying body while he reminisced about the good things in life. Though a caregiver does appear minimally in Wakey, Wakey, the play is a clear demonstration of Emerson’s solo power on the stage, and why it’s a necessity for him to work in New York theatre more often.

It would be remiss not to mention the evocative set pieces found in The Band’s Visit and The Light Years. Scott Pask’s revolving set in Visit showcased a fictional town in the middle of a desert near Tel Aviv. Whether audiences were looking at a stark pay phone or a dusty eatery, the pieces tended to move into each other in a symbolic nod to the slow movement of time. Laura Jellinek’s complex, transformative set in The Light Years belied anything else the play had to offer. A two-level set with impressive period-structures and lighting effects illuminated a surprisingly droll show featuring a pair of stories centered on the Chicago’s World Fairs in 1893 and 1933, and the squashed dreams behind them.