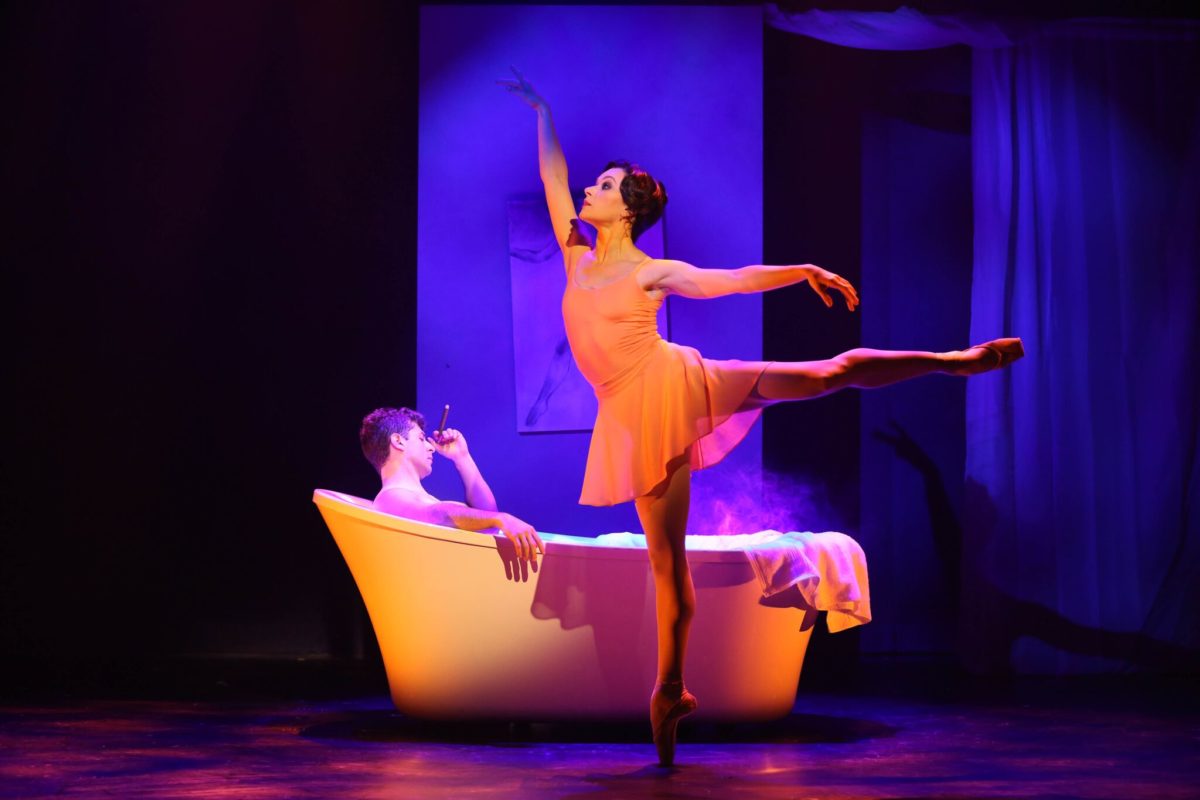 He said he’d written and directed his own two-character adaptation, called John Marcher Doesn’t, at Emerson College in the 1970s, adding that it was “a poor script.” I’d already given the ticket away so he wasn’t able to accompany me but I’m afraid he might not have had a much higher regard for Thompson’s version than he had of his own.

Thompson has updated the short story (referred to in the program as a novella) from its turn-of-the-century milieu to the present day, using current colloquial language (and occasional profanity). Most of James’s narrative (whose original you can read here) is abandoned in favor of a much looser imagining of John and May’s history, revealed within the framing device of a first-person account told by the elderly leading character, John Marcher (Peter Friedman), a successful art dealer, to his unnamed nephew (Tony Yazbeck).

Most of what transpires on stage is not in James’s prolix account, including anything like the frame, which begins when the nephew comes to John’s New York apartment for emotional support after breaking up with his girlfriend, who called him a “heartless motherfucker,” over his not being ready for marriage.

This serves as the springboard for Uncle John to give his nephew a man-to-man—the main plot—about his relationship problems by recounting the tragic tale of his own failed love life, which he blames on “the beast.” That’s the moniker he gives to his lifelong inability to commit himself to the woman he loves because of his foreboding that something terrible is going to happen to him, which will also thereby harm anyone he loves.

What follows on the Vineyard Theatre’s stage over the play’s intermissionless hour and 45 minutes is the story of John’s on again, off again, relationship with the beautiful May Bartram (Irina Dvorovenko)—incorrectly spelled Bertram in the program. Regardless of her Anglo-Saxon name (never mentioned in the dialogue), May has been transformed to a Russian, probably to accommodate Ms. Dvorovenko’s Ukrainian accent. The script even says she spent time as child viewing the paintings at Leningrad’s Hermitage.

The show’s “dance play” subtitle is realized via director/choreographer Susan Stroman expressing the couple’s decades-long relationship in dance, balletic and modern. Yazbeck doubles as the dashing, young John, sharing the terpsichorean honors with Dvorovenko and a chorus of six lovely female dancers.

Throughout, however, the older John, who, given the dates involved, would probably be in his mid-70s, keeps entering to narrate, offering what become increasingly distracting intrusions. Friedman, one of New York’s most reliable actors, is perfectly fine but even he can’t prevent the clash of his prosaic lines with the lyricism of Stroman’s choreography. Nor can the nearly bald actor, although still trim, do much about the constant reminder of the disparity in appearance between him and Yazbeck, who—unlike Dvorovenko—doesn’t age.

The action begins in Naples, Italy, in 1968, where John—depicted as an inveterate flirt with eyes for every pretty face—first meets May, an exquisitely lithe, camera-toting, young woman who first appears in full balletic mode, floating en pointe in pink. They fall hard for one another but John’s psychological bête noir roars too loudly for them to continue their budding affair. James describes this, by the way, as far more casually fleeting than the play makes out.

After a brief, present-day scene in John’s apartment, we move to a great house in England’s Cotswolds, in 1988. (Although James doesn’t offer its location, this house—called Weatherend by James but unnamed in the play—is where the original story begins. And James separates the time lapsed by 10, not 20 years.)

John, having sold Matisses’s famous 1909 painting, “Dance,” to the house’s wealthy owner (Teagle F. Bougere), meets his wife, who—as these things go—happens to be May. (There is no husband in James nor, of course, is there any painting.) The painting becomes a choreographic focal point, with Stroman several times molding her dancers into a semblance of Matisse’s circle of coryphées.

Meanwhile, despite the passion of their earlier encounter, John (unlike May) misremembers many details of it, but they’re still hot to trot so the pair once again—despite the danger from May’s rifle-toting spouse—decide to run off. But that damned beast once more bares its fangs.

Finally, it’s 2018, 30 years later, and John reenacts his final meeting with May, who the play posits became a famous photographer and whose recent New York exhibit John visited in hopes of meeting her. They reunited only for the ailing May to die soon after. John realizes angrily how he’s destroyed his one true chance for love by succumbing to a beast that became real only because he let it. His nephew, of course, will make good use of the lesson.

Performed with minimal sets (by Michael Curry, who also did the costumes) on a mostly black stage pierced by cones of light, the show has a modestly budgeted look that occasionally has imaginative effects, like the various ways sheets of filmy cloth are used to depict the beast. I suspect, though, that these images are a bit too literal for what is, after all, an imaginary phenomenon. And scenes like the one in which May “swims” (while supported by an unseen performer) across sheets of green fabric are, I’m afraid, no longer pushing envelopes.

Fortunately, the show enjoys an abundance of melodic, lyric-less music by the venerable John Kander (Chicago), whose longtime partner, Fred Ebb, passed in 2004. The combination of his lush, romantic melodies and Stroman’s choreography brings to mind the dramatic dances of Gene Kelly musicals in which that handsome devil cavorted with the likes of beauties like sexy Cyd Charisse or gamine Leslie Caron.

The dances, however, while expertly performed, only occasionally suggest the originality of those great routines, perhaps because they’re restricted largely to expressing emotions without having either words or distinctly situational actions to reflect.

James’s story defeats dramatization, having been converted here into a dour tearjerker sometimes suggesting a parody of those sentimentally melodramatic 1950s Douglas Sirk movies. Consider, for example, this sappy exchange:

MAY Are you certain?

YOUNG MARCHER Yes. Will you come with me?

MAY Yes. I knew you would return to me.

YOUNG MARCHER Let’s go now. We can do this together, but we have to leave now.

MAY After my husband goes to sleep, I will meet you here.

MAY: I will only be a few minutes.

Tony Yazbeck is a marvelous dancer and well-qualified actor with strong masculine appeal. Still, the blocked, tortured John offers him little opportunity to project the charismatic charm that might have made him more engaging.

This is regrettable in view of the exceptionally appealing leading lady/prima ballerina, Irina Dvorovenko, a beauteous sylph whose high cheekbones and flashing eyes, together with a fairy-like physique and superb balletic technique astonishingly belie her 44 years. With her rich stage voice, animated features, and thespian sensitivity, she deserves to be the show’s magnetic attraction.

The Beast in the Jungle will attract, and perhaps excite, fans of Kander, Stroman, and Yazbeck. The chief reason to see it, though, is its artistic stealth bomb, ballerina Irina Dvorovenko, whom I’d want to see more of even if she weren’t dancing.