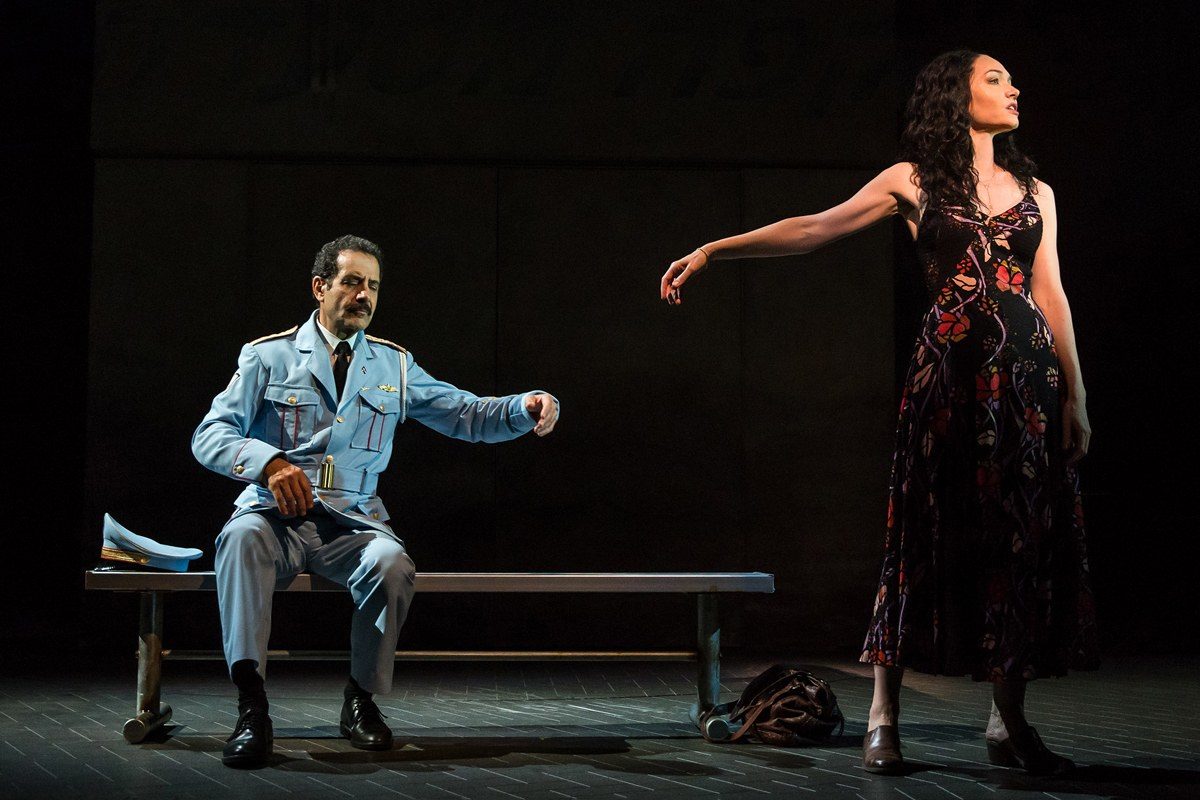 In The Band’s Visit, the Alexandria Ceremonial Police Orchestra arrives in Israel, to perform at the Arab Cultural Center in the town of Petah Tikva. Opening on a note, sweetly evocative of the keystone cops, the band seeks transport to their destination.

In fact, the humor surrounds the fact, that in Arabic there is no p-sound, so the band ends up, instead, in the desert town of Bet Hatikva. While the place is fictional, it is an evocation of barrenness and banality, such as one feels when life is filled with disappointments and unalterable dailyness.

Happily, romance is the chord that brings these characters together. In part, the musical’s arresting quality comes from the nontraditional characters. Here, Tony Shalhoub (Monk) as Tewfiq, the band’s conductor, portrays the graceful, gentle soul who discovers the kindness of the young woman at the town’s only café. In this role, Katrina Lenk, whose portrayal of the lesbian lover in last season’s Indecent remains memorable, is a delicate rose, amidst this harsh environment.

Both actors are wonderful, but it is jaw dropping to watch Shalhoub in yet another role that is completely unlike the last one we saw him in, namely Arthur Miller’s The Price on Broadway. Exhibiting boundless range, Shalhoub is a consummate actor.

The two protagonists are joined by a gifted ensemble that includes John Cariani and George Abud, among several others. In fact, the musical, with its small cast, and quiet small stage quality works surprisingly well in the Broadway theater. Last season, the show debuted Off Broadway, at the Atlantic Theater, to great acclaim.

And because the musicians are on stage throughout the play, the human harmony that emerges, amidst the haunting blend of instruments, including oud, violin, trumpet, bongo, clarinet, is wondrous.

As is his wont, director David Cromer mines the humanity of the piece, adapted by Itamar Moses from the screenplay for Eran Kolirin’s 2007 movie of the same title.

Composer/lyricist David Yazbek blends a range of musical genre in a unique way, while writing lyrics that evoke “Umm Kulthum and Omar Sharif…floating on the jasmine wind.” It’s the brilliance of the musicality that drives the show.

Scott Pask’s revolving set and Tyler Micoleau’s rustic lighting evoke the reality of this bleak environment, perhaps much like Peta Tikva itself, before it became a bustling urban center.

The Band’s Visit – not to be missed!