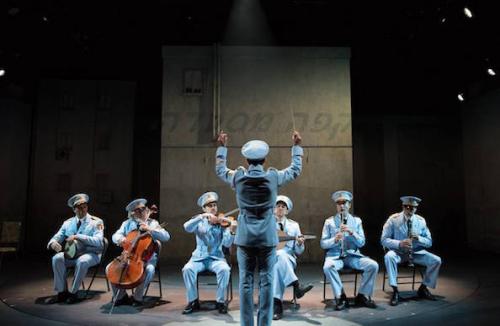 What happens when you mix some lost Egyptian musicians with some Israeli
residents bored with life in the dessert? With Director David Cromer as the
chef, you get a recipe for a satisfying slice of life in the world premiere of
David Yazbek’s The Band’s Visit Off-Broadway at Atlantic Theater Company.

With a book by Itamar Moses, based Erin Kolirin’s screenplay for the film by
the same name,  and music and lyrics by Yazbek, The Band’s Visit
transports us to another world, yet tells a warm, refreshingly human story that
feel close to home.

Tony Shalhoub stars as conductor Tewfiq, who in 1996 has traveled with Eygpt’s
police band to play at a dedication ceremony for the new Arab Cultural Affairs
Center. A mix up in the name of their destination lands the band in the middle
of nowhere — Bet Hatikva — instead of the city of Petah Tikva.

Residents of the town welcome the travelers — after all, this is the most
exciting thing that has happened around there in a while — share food at the
local cafe owned by made-hard-by-life Dina (Katarina Lenk) and offer the men
places to sleep in their homes until they can catch the right bus to their
destination the next morning.

It’s amazing what can happen in one night. Tewfiq and Haled (Ari’el Stachel),
who is responsible for the mixup, stay with Dina. Others stay with new father
Itzak (John Cariani), whose wife is about to leave him, and in the restaurant
itself. Dina decides to be spontaneous and takes Tewfiq out to show him the
sites — as they are — and others head out on a roller skating date. The
evening is magical with regrets and confidences being shared and unexpected
friendships taking root. And could Dina be feeling something more than
friendship with her shy, widowed companion?

The action, expertly directed by Cromer who works his usual magic, takes place
on Scott Pask’s bleak set — as colorless as the lives of the people living
there. A revolving moves the story from place to place partnered with subtle
lighting shifts designed by Tyler Micoleau.  Choreography by Patrick
McCollum and movement by Lee Sher assist. .

The plot unfolds in songs full of emotion, yearning and heartfelt desires. One
character, identified only as Telephone Guy, waits expectantly by a pay phone,
frozen in time as he awaits a call form his girlfriend. The longing  and
need in his soul is visible. We don’t know why he thinks she is going to call,
or whether there is any chance she might, be we sure hope she will.

A nice touch is that, despite our expectations, politics really isn’t a factor.
How refreshing to think that people can come together and find kindness and generosity despite differences in politics.

I didn’t want the visit to end. “Monk” fans, this character won’t
remind you of your favorite TV detective, but you will want to see Shalhoub
shine in this heartwarming, magical musical.