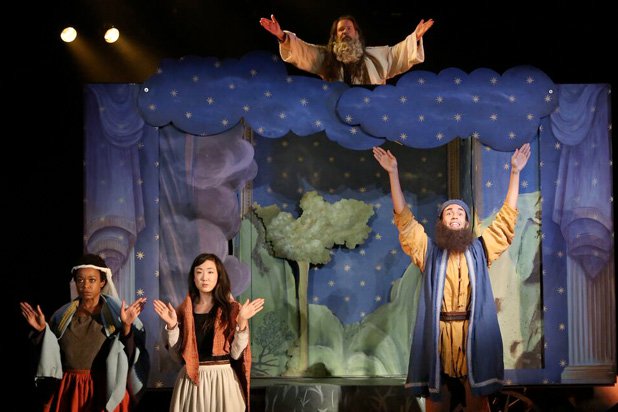 The premise is fascinating. Oliver Butler’s direction is excellent. The cast is superb: Kyle Beltran as the doomed Brom; Quincy Tyler Bernstine as the spunky Hollis; Michael Cryil Creighton as the dimwitted Gregory; Greg Keller as Asher, the wandering Jew; Jennifer Kim as the licentious Rona; and Thomas Jay Ryan as Larking, the manager and God in all the productions.

As their world falls apart and the play fails to come together, the actors ask their favorite saint for personal salvation. Brom prays to be spared from the Plague even as swollen nodes leaking pus erupt over his body. Rona prays to be made once again a virgin, not pregnant with the child Larking will believe is his, even though it is really Gregory’s. Larking prays for actors who can act.

Then, just as we’re figuring out what the play is trying to tell us of suffering and redemption, immortality and survival, art and revelation, Creighton steps onto the stage as the playwright and starts telling us what he thinks the play is about.

But that’s not all, he also tells us about the author’s life – his teachers, his school and his  sexual awakening as a gay man at a time when the AIDS epidemic was at its height. Soon Creighton gives us a mini lecture on the development of art from Middle Ages to High Renaissance. And finally Bernstine appears to tell the audience how she discovered the secret to acting while performing in “A Christmas Carol.”

Depending upon your point of view, this section can be an unwanted interruption or an example of great creativity. But eventually, the play resumes. It even ends in a way that somehow reinforces our faith in humanity.

Fortunately, the actors never seem to lose confidence in their message. And even at his most self-indulgent, Harrison never loses his sense of humor. Whether we’re watching the troupe’s inept portrayal of the Seven Deadly Sins, a wooden Noah arguing with his rebellious wife, or Creighton’s wry reportage on his first attempts at sex, a good laugh is always waiting in the wings.

So, The Amateurs, like the men and women in fourteenth century Europe, survives through humor and faith.

The Amateurs is extended through March 29 at the Vineyard Theatre, 108 East 15 Street, www.vineyardtheatre.org.
Photos: Carol Rosegg