November 25, 2021: Ben Jonson wrote The Alchemist in 1610 when London theaters were closed for two years during the plague. Sound familiar? Samuel Coleridge called it “one of the three most perfect plots ever planned.” (The other two were Oedipus and Tom Jones) Its freewheeling comic nature finds the play repeatedly revived. Who doesn’t enjoy the cleverness and comeuppance of resourceful con men? 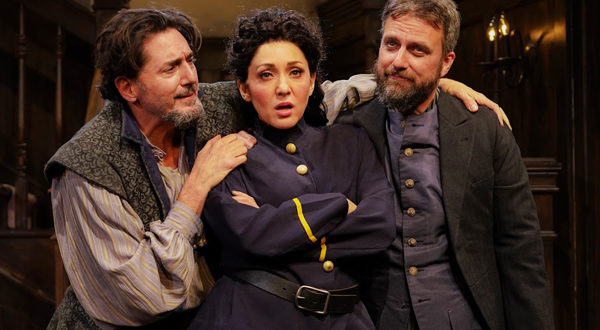 November 25, 2021: Ben Jonson wrote The Alchemist in 1610 when London theaters were closed for two years during the plague. Sound familiar? Samuel Coleridge called it “one of the three most perfect plots ever planned.” (The other two were Oedipus and Tom Jones) Its freewheeling comic nature finds the play repeatedly revived. Who doesn’t enjoy the cleverness and comeuppance of resourceful con men?

Jeffrey Hatcher’s screwball, slimmed down adaptation has not a speck of dust on it.  As broadly directed by Jesse Berger and acted by a cast of talented, rubber-faced thespians, it’s fast and funny.

Subtle (Reg Rogers), Dol Common (Jennifer Sanchez), and Face (Manoel Felciano) are a triumvirate of grifters. Ensconced in the house of Face’s absent Master they’ve been bilking the local populous by pretending to be an Alchemist (Subtle) and his retainer (Face). A chest which will only open by a key from each holds considerable money. Like all con men, they’re hesitant to move on until it’s full to the brim.

Each visiting “client” is met by newly haberdashed personas as his petition dictates. Like most farce, costume changes are frequent and frenzied. (Designer Tilly Grimes invents with imagination and humor.)

Tobacconist Abel Drugger whose shop is open during the pestilence because he sells liquor and is therefore considered “essential,” wants to learn his future. (Nathan Christopher playing sweetly naïve to a T. ) Subtle becomes a turbaned mystic, Face a Marty Feldman-like hunchback servant, name of Lungs.

Dapper (Carson Elrod whose physical affectations are a treat) seeks a magic charm to win at gambling. That which he secures at some cost stretches credibility to ridiculousness. For him, Subtle is a caped and collared magician with wild hair.

Sir Epicure Mannon (Jacob Ming-Trent – who seems to be infectiously having as much fun as we are) wants a philosophers stone that changes base metal into gold. The “fop” is accompanied by faithful servant, Surly, who hails from the Dutch Colony, Brooklyn. (Louis Mustillo – a Damon Runyan character with pitch perfect accent.) Surly is skeptical of goings on and futilely tries to stop them. The delivery of every metal object Mannon owns is a hoot. Subtle has donned a black coat and Elizabethan collar. To turn metal into gold apparently requires a small amount of gold. Fortunately, “an itinerant gold peddler” passes. Unfortunately there’s an explosion in the basement. Fortunately a second stone is “cooking.”

Also in search of the alchemist’s stone is Ananais, a Baptist religious fanatic who belongs to a sect banished to Holland “for being perfect.” (Stephen DeRosa whose sing-song accent and comic timing work wonderfully.) Here Face whips into the Baptist’s own discarded hat and cloak masquerading as his superior, conveniently passing through town. Still, convincing the pastor to part with his purse without demonstration is difficult.

Every man returns increasingly complicating matters, though filling the coffer. Drugger wants to marry attractive young widow, Dame Pliant (Teresa Avia Lim – understated and consistently droll). The widow’s fate is controlled by her brother Kastril (Allen Tedder – loose limbed and exaggeratedly boyish) who insists she marry well despite having been provided for. Kastril wants to learn “the angry arts,” which seems to be how to argue. The Alchemist agrees to teach him.

Dol discovers her partners both plot to marry the widow and concocts a scheme of her own. Dapper, having lost his good luck charm is told that kissing a lost relative Fairy Queen (Dol) will achieve his ends. Mannon, now dressed like a Las Vegas Louis IV, is talked into paying for the company of a mad gentlewoman (Dol) whose passion is uncontrollably roused by a secret word. The Baptist returns from praying and unwittingly dons someone else’s outerwear creating a droll encounter. A Spaniard (Louis Mustillo) whom Face meets at the tavern appears in search of an appropriate wife and is commandeered to represent something/someone else….

Reg Rogers’ Alchemist is marvelous. Channeling a physically limber John Barrymore, he mercurially shifts to multiple caricatures without ever overplaying. As Face, Manoel Felciano fluidly becomes whatever the situation requires whether trying to blend in as artwork or rising from a smoke-filled basement like a groundhog in goggles.

Jennifer Sanchez’ Dol ebbs and flows. Either her character or the actress appears to be enjoying herself less than the rest of the company.

There’s an exhaustive amount of running up and down stairs, entering and exiting through multiple doors and a hidden room. Alexis Distler’s period set gives ample opportunity for this without seeming blatantly designed for the purpose.

Director Jesse Berger has a flair for farce. There are endless expressions, pauses and sight gags that will keep you grinning. Pace is just as it should be. Each client has his own set of quirks and pretensions. The space is splendidly employed.

I found two contemporary inclusions unnecessary and obtrusive: Surly’s Brooklyn character just didn’t fit. Dol, at one point, dresses as a cartoon interpretation of a figure out of the James Bond film, Goldfinger, a depiction that unsuccessfully struggles for relevance. Additionally, early on, she’s outfitted in a shorty nightgown and thigh-high bloomers which throw off visuals. Both elements of attire are completely wrong.