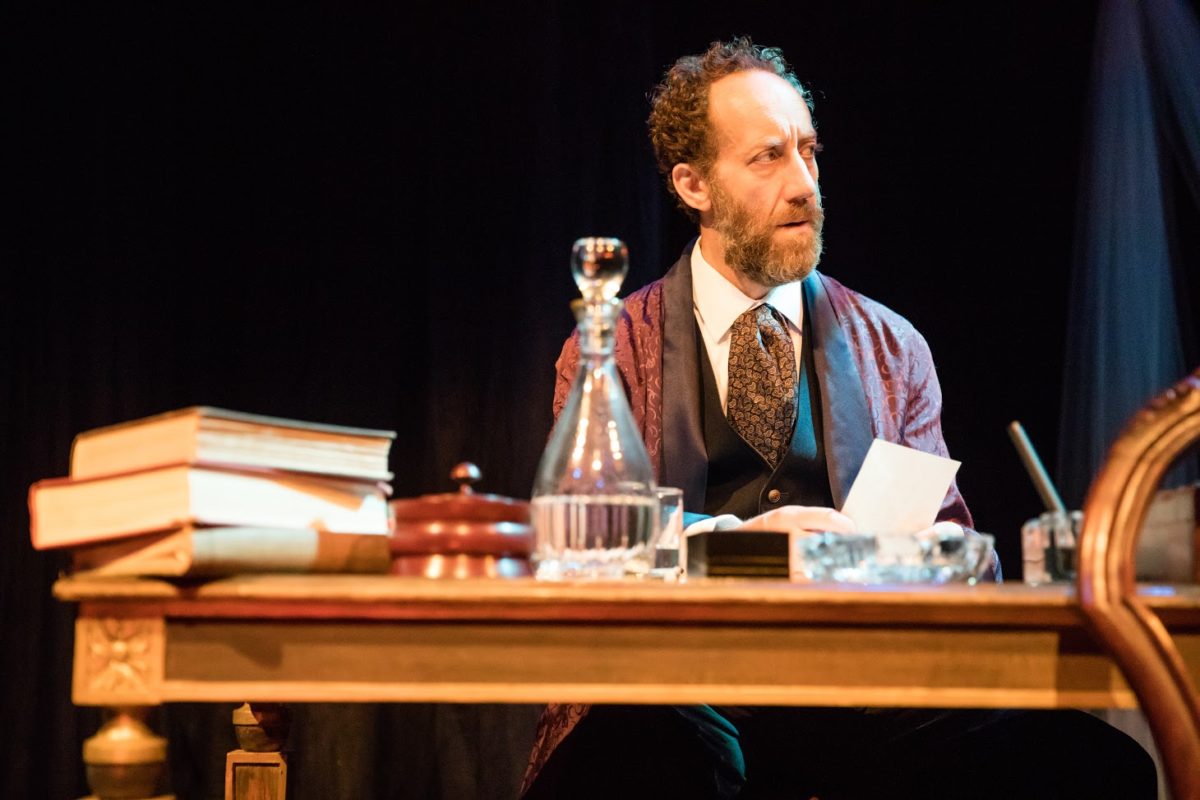 Joey Slotnick in the title role in a scene from Tchaikovsky: None but the Lonely Heart

This noble, if impossibly pie-in-the-sky, goal has inspired forty ERC productions, more than half of them scripted by Wolf, although the only one I’ve seen prior to Tchaikovsky is Van Gogh’s Ear, in August 2017.

That visually attractive but dramatically stultifying work, which told the story of Van Gogh’s anguished days in Arles against a background of music by Debussy, Fauré, and Chausson, was the first of three ERC productions at the Pershing Square Signature Center over the past year (I missed Mary Shelley’s Frankenstein). It used the largest of their four venues, the Diamond Stage, while Tchaikovsky is in the smallest, the Ford Studio.

Staged by Donald Sanders, ERC’s “director of theatrical productions,” with attractive period costumes and a simple setting by its resident designer, Vanessa James, Tchaikovsky will be prized by aficionados of classical music, especially those familiar with the compositions of its eponymous, late nineteenth-century Russian composer, who lived from 1840-1893. If you know Pyotor Ilyich Tchaikovsky only for The Nutcracker, you will, perhaps, recognize its “Trepak” and “Intermezzo” among the 11 numbers performed during the show’s overlong two hours.

Given where it’s performed, it’s likely that audiences will think they’re going to see a biographical drama. However, Tchaikovsky: None but the Lonely Heart is a play (or musical, for that matter) only by the loosest definition, at least three quarters of its two acts being a concert by three remarkably gifted young musicians, violinist Stephanie Zyzak, cellist Ari Evan, and pianist Ji. They are supplemented by several songs sung in Russian by excellent tenor Adrian Kramer and interpreted in ballet by handsome dancer Daniel Mantei, in white wig, frilly shirt, and silver tights.

The largely undramatic text, as per the ERC style, is adapted from the numerous letters of Tchaikovsky (Joey Slotnick) to his brother, Modia (usually transliterated into Modest), and to and from Nadezhda von Meck (Shorey Walker), the wealthy, widowed patroness who had a 13-year-year epistolary relationship with Tchaikovsky.

Except for the second act, when von Meck prances gaily around the stage with an open parasol—enjoying Florence—she’s confined to the small area on our right, decorated with white, ceramic urns, a love seat, and a wooden screen, while the composer occupies the equally restricted area to our left, fitted with a table and chairs. The string musicians, backed by an artful arrangement of fabric, play at center, the pianist directly upstage of them. Mantei must make do with the limited available space for his leaps and twirls.

Tchaikovsky and von Meck act out their letters in their separate spaces by looking anywhere but at each other, since the essence of their relationship was that they never actually met. And, since Tchaikovsky also speaks by missive to his brother, there’s little difference in manner from when he’s responding to von Meck. The concept—minus the music—is enormously more successful in A.R. Gurney’s Love Letters, where the two actors merely sit side by side, reading their words, scripts at hand.

Not that the material itself lacks interest. Tchaikovsky, very open to Modia about his homosexuality and the difficulties it’s causing him, has lots to get off his mind, including his agreeing to marry a woman with whom, on his wedding night, he admits “Defloration did not happen.” And the story of his bizarre, purely epistolary connection to the rich von Meck, the patroness whose money allowed him the leisure to fulfill his artistic aspirations, even though they agreed never to meet, is fascinating. The psychological ramifications for both parties, however, which a traditional playwright might have explored, are left for us to read about in the helpful program notes.

Neither the eternally sad-faced Slotnick, lightly bearded here, nor the elegant but one-note Walker, given to intense staring, is able to invest their roles with much charisma or conviction. The format is partly to blame, since with so much musical and terpsichorean virtuosity on display, flowery words spoken by merely ordinary actors are bound to sound more banal than when read silently to oneself.

Also problematic is the show’s failure to contextualize or even mention the music we hear; it seems to have been selected to emphasize particular emotional states being expressed by the characters. The letters will stop, the musicians come into focus, and the actors will sit by, staring rapturously into the ether in appreciation of what they’re hearing, even though the music is being played in some imaginary place.

The tenor now and then appears during the “action,” not only to sing (his lyrics are provided bilingually in the program but aren’t projected as surtitles, as the script says) but possibly to serve as a fancied image of the lonely Tchaikovsky’s idealized male companion, while the dancer may be intended as the princely vision von Meck has of the artist she preferred in her head rather than in her arms.

If any of these strike a bell then Tchaikovsky will probably be up your Tin Pan Alley-eski. If not, I suggest Ken Russell’s overripe 1971 biopic, The Music Lovers, starring Richard Chamberlain as Tchaikovsky and available in 10 segments on YouTube. It’s a cinematically exaggerated, even phantasmagoric vision but it’s also a lot more fun (and you get to see a topless Glenda Jackson!).

Tchaikovsky: None but the Lonely Heart