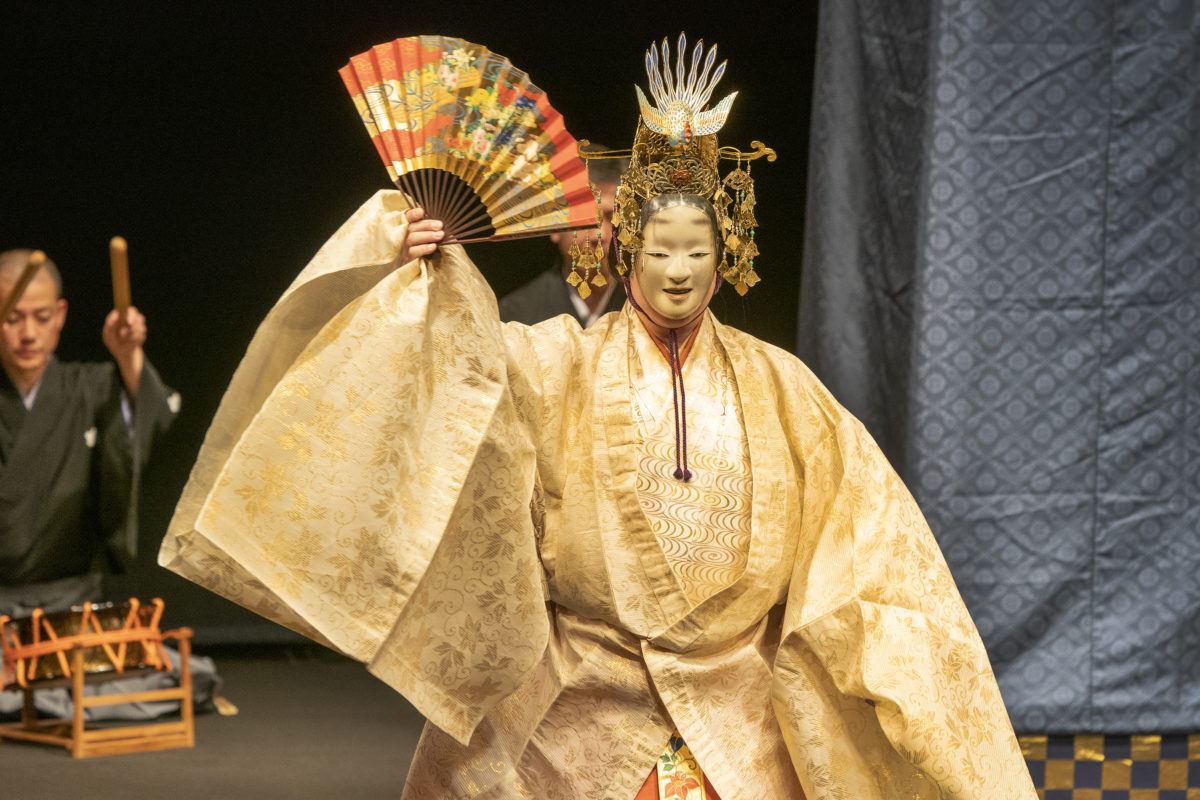 (Aside: the printed program eschews macrons, but I prefer them as a means to indicate long vowels. Noh, in fact, is usually spelled nō—both lower and upper case (Nō) usages are common—but I’ll use noh here.)

Noh and kyōgen are two of the four best-known genres of Japanese traditional theatre, the others being kabuki and bunraku. Noh and kyōgen, born in the 14th-century, predate the other forms. I won’t take up space describing all their differences, which can easily be discovered on the Internet. A few things, though, might be noted.

Noh is serious and kyōgen mainly comic but sometimes sentimental. The genres traditionally appear on the same programs, in alternation, sharing the same formal stage of polished wood, with four pillars supporting a gabled roof. Up right is a bridgeway, set at an oblique angle, used for entrances and exits. Masks appear on a limited number of characters, more frequently in noh than kyōgen.

The acting is highly formalized and traditional, as are the costumes and language. Only the sparest scenic units, more symbols than representations, appear, if at all. Props also are highly selective. In noh, an orchestra of three or four (two or three drums and a flutist) always appears, seated on their knees upstage. Noh usually uses a chorus of eight to 10 (although only six appear in Taiten), seated stiffly on their knees, in two rows, at stage left.

The Japan Society program is part of its 2019 celebration of the ascension to Japan’s Chrysanthemum Throne of its 126th emperor, Naruhito, which ushered in the current imperial era, named Reiwa, officially interpreted (instead of translated) as “beautiful harmony.” To Westerners, the most familiar imperial eras are those that began following the nation’s opening to the West in the mid-19th century: Meiji (1868-1912), Taishō (1912-1926), Shōwa (1926-1989), and Heisei (1989-2019).

In 1915, Taiten,a noh play celebrating the 1912 ascension of the Taishō emperor, was produced. Although the noh repertory consists mainly of plays written before the Meiji period, perhaps 300 post-Meiji plays have been written, some with strikingly modern themes and subjects, including brain deaths and organ transplants! Kyōgen, too, has had many new plays written, but only a tiny number of new noh and kyōgen plays have joined the repertory.

The Japan Society, in collaboration with the Yokohama Noh Theatre, has revived the over-a-century-old Taiten, to honor the new emperor. Appropriate revisions for the 21st century have been made by noh master Katayama Kurōemon X (which the Japan Society spells Kurouemon), with the assistance of Dr. Haruo Nishino. Not only did the original play (which had a few revivals) premiere at Kyoto’s Katayama Noh Theatre, but Kurōemon’s own father left behind notes on it, as well as one of its props.

Taiten was the last entry on the three-piece program, which began with a concert version of the dance music played in the noh play Kiku-Jido (Jido of the Chrysanthemum). Four musicians, all wearing the standardized formal dress of black kimono and gray divided skirts called hakama, entered, sat on their knees in a line, and performed on the noh flute, small hand drum, large hand drum, and stick drum.

The music, interlarded with the musicians’ idiosyncratic vocal markers, called kakegoe, showed a wide variation in tone and rhythm. Structured according to the traditional rhythm of introduction (jo), development (ha), and climax (kyū), the pace gradually accelerated, weaving a hypnotic spell, even for those unfamiliar with the admittedly esoteric sound of noh music. Such concerts, by the way, are not common on noh programs since the music is designed for dance scenes, not to be heard on its own.

The music was followed by a famous kyōgen play, Kagyū (The Snail), performed by members of the Yamamoto Tojirō family, of the Ōkura School. This is a farce much like a number of others in the genre, where an ignorant servant, usually called Tarō-kaja, is sent by his master to fetch something whose name he doesn’t understand, leading to amusing complications. In this case, Tarō-kaja (Yamamoto Norihide), is ordered to find a snail. Such creatures are believed capable of increasing longevity so the master (Yamamoto Noritoshi) wants one for his grandfather.

The doltish servant comes across a mountain monk or yamabushi (Yamamoto Noritoshi), whose unusual gear convinces Tarō-kaja that he must be a snail, leading to comical confusion abetted by the snarky monk’s decision to play along with the idiotic mistake. In the usual conclusion to such mix-ups, the master chases angrily after his servant. Here, however, he himself becomes ensnared in the monk’s good-natured, rhythmic cavorting.

It was clear that the performance, whose simple humor would appeal as much to kids as adults, was working when the audience burst into laughter, sometimes quite loudly. I have my favorite kyōgen plays but don’t always find the genre’s humor as funny as its reputation would suggest. Thus the strong response demonstrated the wisdom of choosing Kagyū for this occasion.

Like Taiten, the noh play that followed, Kagyū was performed on a stage that barely suggested the surroundings these works would enjoy in Japan. Instead of a highly polished, wooden floor, the actors walked, in their unique, sliding way, on what looked like thin, gray carpeting. The only semblance of a noh-kyōgen stage was a low railing, several feet long, in roughly the area where the railing of a traditional bridgeway would be.

The pillars, back wall (with its painted pine tree), and roof, of course, were not replicated, as is expected when these genres tour. Even the low, partial pillars, commonly seen in such productions to mark off the strictly regulated acting area, were gone.

The actors, thus, used more of the stage laterally than they might in an authentic staging. In the noh play, they stood, strangely, both upstage and down of the railing. While in most other ways traditional, the presentation, by necessity, lacked some of the exquisite atmosphere experienced at a noh theatre.

Taiten, written by a professor named Teisuke Fujishiro,accomplishes the goal of celebrating the new emperor’s ascension, but its value lies mainly in its ritualistic, auspicious values, and not in its dramatic ones. It contains two colorful dances, each by a deity, that give a good idea of congratulatory noh at its most joyful, but the lack of a narrative and the focus on dance gives an imperfect impression of noh’s dramatic qualities.

Set in the classical past, its premise is the announcement by a formally dressed imperial messenger (Hōshō Kinya) and his servant (Hōshō Naoya) to the imperial shrine at Ise of the new emperor’s enthronement. This inspires an auspicious dance by a heavenly maiden or ten’nyo (Mikata Shizuka)—her beautiful mask, gorgeous apparel, and headdress closely resembling the angel in the noh play Hagoromo (The Feather Robe)—and an even livelier one by the god Amatsu-kami (Katayama Kurōemon X). Their dances confer wishes for the nation’s good fortune under the new imperial reign.

Cavils aside, one must congratulate the Japan Society, and its innovative artistic director, the distinguished Yoko Shioya, for their ongoing efforts to bring outstanding examples of Japanese performing arts to New York. May they continue to do so and may the new emperor reign, as they say, for 10,000 years. Banzai!