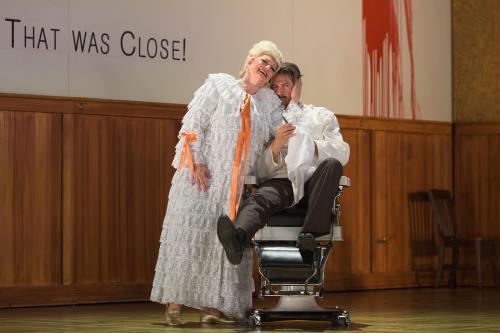 It’s hard to erase the memory of Harold Prince’s elaborate original Sweeney which evoked the horrors of the industrial revolution by setting the story of the murderous title barber and his cannibalistic companion Mrs. Lovett in a giant factory. John Doyle gave it another imaginative spin in 2005 by placing the story in a mad house and having the patients act out the gruesome tale in a grim music therapy session. In the current Glimmerglass iteration, Christopher Alden takes a leaf from Doyle’s book with a similar play-within-a-play model and the actors moving chairs around to suggest the shifting scenes. This Sweeney is situated in a 1950s rural British town hall where the locals are putting on the show after munching on Mrs. Lovett’s infamous pies.

It’s a perfectly valid basic concept—exposing savage appetites beneath suburban primness—but Alden piles on too many distracting elements and weakens the terrifying story’s brutal impact. Halfway through the first act Andrew Cavanaugh Holland’s appropriately tacky set flies apart and the staging gets so busy it’s hard to tell what’s going on. A male chorus member in drag as a charwoman throws a bucket of blood every time Sweeney slashes a throat. Three choristers don elaborate papier-mâché bird heads and flap their wings during “Green Finch and Linnet Bird.” Sweeney and Mrs. Lovett put on traditional “pearlie” costumes of London street entertainers for the classic Act One climax “A Little Priest.” All distractions from Sondheim’s gorgeously clever score.

Bass-baritone Greer Grimsley has the right rumbling tones for the bloodthirsty Sweeney, but lacks the acting chops to convey the torment of the character’s losing his wife and daughter which drives him to such evil deeds. Conversely, Luretta Bybee displays a Cockney comic flippancy perfect for Mrs. Lovett’s cheerful amorality, but lacks the vocal power to fully put over the complicated music. Plus, there’s little chemistry between the two leads.

Conductor John DeMain leads a magnificent orchestra and the chorus does particularly well in delivery and enunciation given the challenge of Sondheim’s intricate lyrics, but this Sweeney is more of a muddle than the desired horror fest. Glimmerglass artistic director Francesca Zambello’s production of The Crucible tells its story with less fuss and more power. Ward’s complex symphony-like opera won the 1962 Pulitzer Prize and is frequently performed nationwide, but rarely in New York. Perhaps because the original nonmusical is put on with some frequency including a dazzlingly innovative Broadway reinvention by Ivo van Hove just this past season.

While the Glimmerglass cast is given to a bit more melodrama than suits me—theater has more room for subtlety than opera—this Crucible burns with a passion. Zambello and conductor Nicole Paiement mine Miller’s drama and Ward’s score for their emotional riches without unnecessary flourishes. Neil Patel’s haunting set and Mark McCullough’s spectral lighting create an atmosphere of forbidding danger where susceptible minds might well spy witches lurking. Brian Mulligan vocally and dramatically conveys the anguish of John Proctor, the conscientious farmer who defies his hysterical fellow townspeople. Jamie Barton’s Elizabeth Proctor is equally effective; the mezzo-soprano skillfully limns her conflict between martial loyalty and doubt over her husband’s motives. Ariana Wehr makes for a formidable Abigail Williams, the spiteful ringleader in a campaign of finger-pointing. There are also heart-touching moments from Helena Brown’s Rebecca Nurse, Zoie Reams’ Tituba, and Maren Weinberger’s Mary Warren. 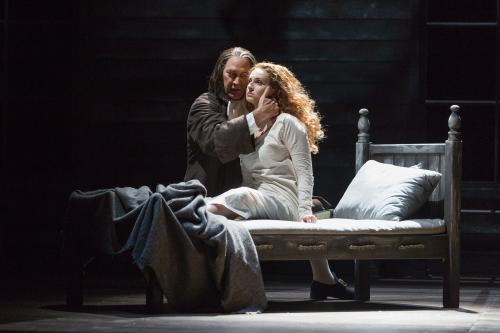 Another summer arts venue, Caramoor Festival for the Arts in Katonah, NY, recently presented a hybrid performance—a concert of Beethoven’s sole opera Fidelio with minimal staging. Most musical scholars cite the soaring love story as sonically sublime but dramaturgically weak. Of course, opera plots are notoriously short on credibility, but even by their standards, Fidelio requires a significant suspension of disbelief. The brave Lenore disguises herself as a boy named Fidelio in order to work as a guard in the prison where her husband Florestan is being unjustly held captive by the cruel governor Don Pizarro. To add to the bizarre plot, the head jailer’s daughter Marzelline has fallen in love with the cross-dressing heroine.

“The script is ridiculous but the music is glorious,” said one audience member at intermission. Perhaps that’s why a concert staging is a more appropriate presentation than a full-on theatrical one. As with all opera, the music is primary over plot and conductor Pablo Heras-Casado delivered a stunning rendition of Beethoven’s vision of transcendent love triumphing against adversity. The cast couldn’t have been better. The magnificent Eliza van der Heever’s clear soprano reached heavenly heights in her dual role of Lenore and Fidelio. Paul Groves made the most of Florestan’s extended aria at the top of the second act, but this opera belongs to the soprano. Alfred Walker was darkly menacing as the governor while Kristinn Sigmudsson as Rocco, the chief jailer and Georgia Jarman as his flirtatious daughter provided admirable comic support and sturdy vocals.

Originally Published on August 9, 2016 in ArtsinNY.com