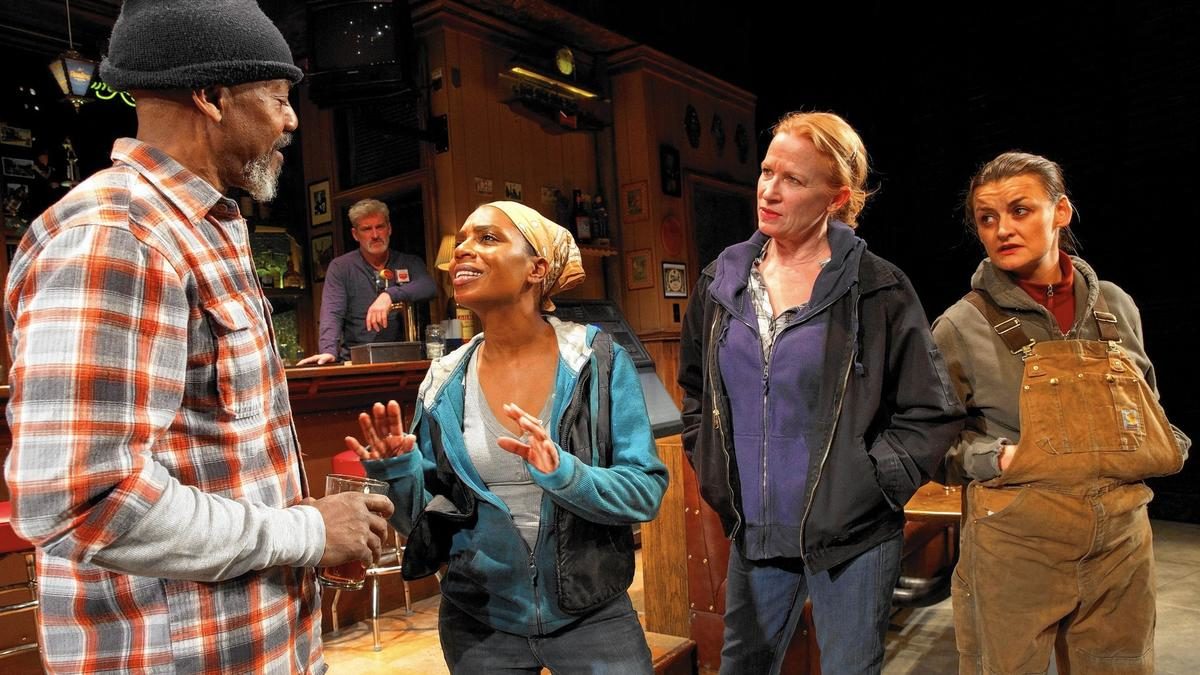 The 2009 Pulitzer Prize-winning play, Ruined, by Lynn Nottage was a blazing drama crafted from stories she put together from interviews with women brutalized during the civil war in the Democratic Republic of the Congo. Now for her riveting new play, Sweat, which recently opened at The Public, she went to Reading Pennsylvania, once described as the poorest community in the United States, to chronicle the lives of steel mill workers whose life style was destroyed by the decline of American factories just after the turn of the century. The play, which unfolds in two acts, is a powerful and sympathetic tale of the dwindling options these blue-color workers faced in rural Pennsylvania from 2000 to 2008.  In-light of the election of Donald Trump, Sweat makes a timely comment on undercurrents at play in our recent election presenting an insightful look at a troubled segment of our society.

The story then jumps back to 2000, where most of the scenes take place at a superb recreation of a local bar by John Lee Beatty, where the workers go to drink and unwind. Nottage draws consistently insightful characters that all went to the same school, work at the same factory, and drink at Stan’s, the town’s lone watering hole. Their doomed way of life is quickly disappearing, and the skilled Nottage allows us, the viewer, to empathize with the desperation and anger of their plight.

Stan (James Colby), who put in 28 years at the factory, was injured on the job because of poor machinery and opened the bar after the accident remains connected to the factory workers, his customers, especially when rumors of layoffs begin to circulate.

The regulars include pragmatic Cynthia, (Michelle Wilson) the mother of Chris, impulsive Tracey, (Johanna Day) the mother of Jason, and a sloppy drunk Jessie (Miriam Shor). The three are tight friends, who have worked side by side on the assembly line for years like their families did for generations. The women watch out for each other and have a tradition of celebrating their birthdays together. Tracey’s son, Jason, has no ambition beyond working at the mill while Cynthia’s son, Chris, sees college as his ticket out of the town. Cynthia’s estranged husband, Brucie (John Earl Jelks), a drug addicted shell of his former self is on the scene always looking for a hand out of some kind.

When Cynthia applies for a job as a supervisor and gets the promotion, she doesn’t comprehend the conflicts her new positon might bring. Then a bus boy, Oscar (Carol Alban), a hard-working Columbian immigrant, who is invisible to the patrons until he sees a Spanish flyer for non-union workers at the factory and gets a job stirring up further turmoil amidst the ongoing cutbacks and shortened hours instituted by management.

Kate Whoriskey, who also directed Ruined, helms a harshly realistic production while leading her gifted ensemble to potent and sensitive portrayals of the struggles intrinsic in their individual predicaments. The beauty of Sweat is the compassionate picture that Nottage illuminates of people you might never know, yet her smart play allows room for understanding and even empathy. The greater take away might be a sense of gratitude for our own opportunities.