“Stop worrying if your vision/Is new/Let others make that decision/They usually do/You just keep moving on.” When Stephen Sondheim wrote these lyrics for Sunday in the Park with George (1984), he was faced with a creative crisis similar to that of his lead character, the revolutionary impressionist painter Georges Seurat. The legendary composer-lyricist had just broke with his longtime collaborator Harold Prince after their short-lived production Merrily We Roll Along. 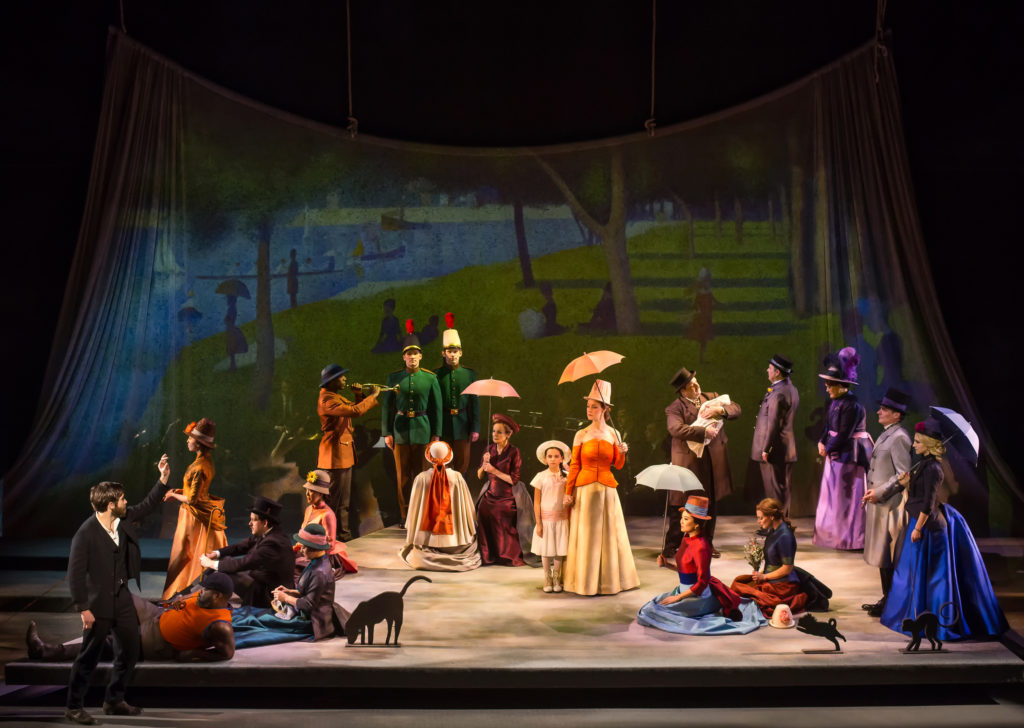 “Stop worrying if your vision/Is new/Let others make that decision/They usually do/You just keep moving on.” When Stephen Sondheim wrote these lyrics for Sunday in the Park with George (1984), he was faced with a creative crisis similar to that of his lead character, the revolutionary impressionist painter Georges Seurat. The legendary composer-lyricist had just broke with his longtime collaborator Harold Prince after their short-lived production Merrily We Roll Along. The songwriter was starting a new partnership with director-playwright James Lapine and moving in a new direction. Sunday, their first work together, was unlike any other American musical before it. Lapine’s book and Sondheim’s songs resembled Seurat’s pointillist canvases with bits of story, words, and tunes assembled to create an unconventional examination of the creative process and a meditation on art itself and how it affects the artist and those around him. The love story between George (in the musical the final “s” is removed from his name) and his model Dot ends unhappily in the first act and the second act takes up new characters 100 years later as George’s descendent unveils a kinetic light show in a modern museum. Hardly material for the “tired-businessman” crowd.

Sunday did achieve a run of 604 performances on Broadway after an Off-Broadway workshop at Playwrights Horizons and won the 1985 Pulitzer Prize. But, by and large, the public and critics didn’t quite know to make of it. Sondheim was accused of coldness just as George is in the song “No Life” as a disdainful fellow artist and his wife pick apart Seurat’s Bathers at Asnières. The show lost the Best Musical Tony to Jerry Herman and Harvey Fierstein’s more comfortable La Cage Aux Folles. There was a successful 2008 Sunday revival from the Menier Chocolate Factory in London and New York. This presented a warmer and more scaled-down vision than the high-tech original with its pop-up set pieces and elaborate projections. Now more than three decades after the original, Sunday is back and the new production by Sarna Lapine (James’s niece) is even more intimate and touching than the 2008 version. This is an expansion of Lapine’s Encores! concert staging. The projections of Seurat’s massive work A Sunday Afternoon on the Island of La Grande Jatte are now on a scrim lowered just in front of the onstage orchestra, and the production is simple and direct. Stripped to its barest essence, the musical becomes an emotional feast as well as an intellectual one.

As George, Jake Gyllenhaal proves you can be a major movie star as well as a musical talent. (Maybe he should have been cast in La La Land.) After performances in straight stage works such as If There Is I Haven’t Found It Yet and Constellations, Gyllenhaal widens his range with a dazzlingly intense vocal and dramatic rendition of George’s conflict between his art and his personal life. Annaleigh Ashford displays exquisite pipes, timing and presence as his determined muse Dot and, a century later, her granddaughter Marie, here given a sassy Southern accent. The large company also includes stand-out work from Brooks Ashmanskas, Liz McCartney, Penny Fuller, and Philip Boykin. Ironically, the show’s producers have withdrawn it from Tony Award consideration because of the shortness of the run. That’s too bad because the two leads probably stood an excellence chance of winning and this Sunday could have taken the Musical Revival award to avenge the original’s Best Musical loss.

Meanwhile, Off-Broadway, Manhattan Theatre Club takes on women’s changing roles in a flinty, daring new work from England called Linda. Janie Dee, who hasn’t appeared in New York since Alan Ayckbourn’s Comic Potential in 2000 on the very same stage, makes a dynamic return as the titular business executive whose personal and professional worlds disintegrate simultaneously. Penelope Skinner’s sharp script does tend to wander a bit in the second act, but otherwise, it’s a spot-on dissection of the sexist trap ensnaring its heroine. The play opens with Linda pitching a new campaign for her cosmetic company’s anti-aging cream aimed at women over 50, like her. It seems Linda has it all—a fabulous career, a loving husband, and two wonderful daughters. But cracks in the perfect facade are slowly revealed as a younger rival sets her sites on Linda’s corner office and traumatic events from the past begin to surface. Linda soon finds herself becoming one of the “invisible women” her campaign is targeting, but she refuses to be ignored. The devastating mess that results indicates Skinner’s pessimistic view of women’s progress, but it’s frighteningly real. Dee deftly displays Linda’s charismatic energy as well as the shaking insecurity she keeps so well hidden. Kudos also to Jennifer Ikeda and Molly Ranson as Linda’s damaged daughters, Donald Sage Mackay as her waffling husband, and Molly Griggs as Amy, her shark-like competitor who wields cyber technology like a weapon.

Originally Published on February 28, 2017 in ArtsinNY.com