Twice in Carole Bugge’s immodestly intellectual comedy, “Strings Attached,” one of a trio of actors opines that “the penis of a humpback whale is twelve feet long.” In a play fixed on philosophical ideas, that is a real grabber. 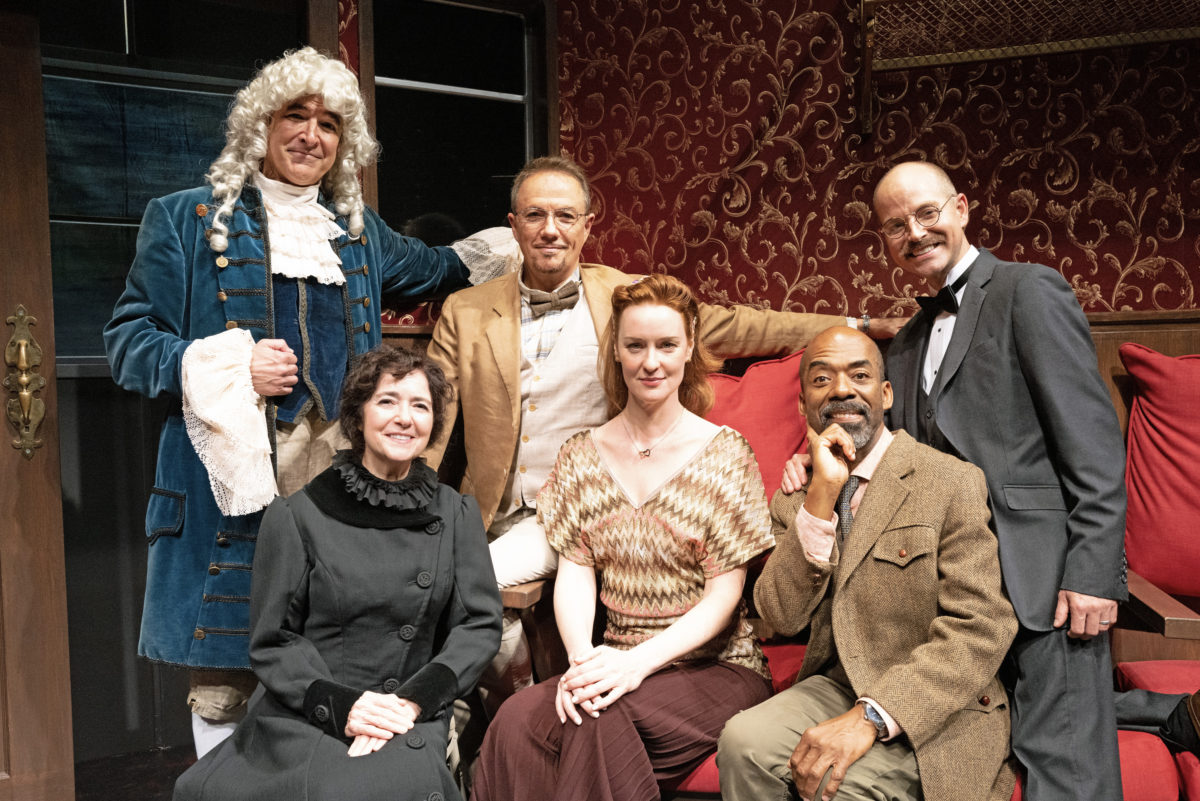 Twice in Carole Bugge’s immodestly intellectual comedy, “Strings Attached,” one of a trio of actors opines that “the penis of a humpback whale is twelve feet long.” In a play fixed on philosophical ideas, that is a real grabber.

In fact, much of the conversation here involves discourse on the Big Bang Theory, as well as String and M Theories. About the “twelve feet”, it’s just a mammoth exaggeration – a funny kind of human universal. Just the kind of human universal that allows us to discover passion through scientific inquiry. In the case of their ménage trois, it is a deeply personal, and conflicted issue.

In this production, the three physicists are skillfully and poetically portrayed. Robyne Parrish plays June, a woman whose sensuality, and sensibility are well beyond the blush of youth, as is her intellect. Refreshing in his dry sense of humor, Paul Schoeffler is a daunting suitor, as is his best friend George – also a man of principles. In this role, Brian Richardson is alternately stern, and highly vulnerable.

Set on a train ride to London, the three encounter various characters, including their mentors: Sir Isaac Newton, Max Planck, and Marie Curie. Still, their conversations about theoretical physics come physically alive at the end of Act One, when the three physicists begin to dance.

Seemingly random in their movements, they bump into one another like particles, or electrons circling an atom. Their dancing – expressing themselves through their humanity, ultimately demonstrates the purpose of their scientific inquiry. It’s about what brings things together, how they are bound, and what keeps them apart.

Sharing her personal sense of loss and tragedy with June, Marie Curie opines, “This world, it’s a dance, eh? All we can do iskeep dancing, and live with the uncertainty.” In this role, Bonnie Black is a revealing presence – cancelling our fear that the center will not hold. Respectfully of course, Curie’s research into radioactivity killed her, while making huge contributions to the treatment of cancer.

Black also plays the roles of a US Woman and a Ukrainian Woman. While the Ukrainian is concerned with symmetry – balance would be helpful in time of war, the US Woman is something of a bomb, socially. Recognizing the famous physicist, she throws herself at the situation, as if she where his equal. And here they are bumping into one another on the train – in the same place, at the same time.

As directed by Alexa Kelly, the production has a charming improvisational feeling. As an ensemble, the actors make strong connections, powering some lovely moments. Still, with dialogue that delves into a lot of theory, one can get lost.

When it does work, and the multitude of ideas get wed, it is much to the audience’s pleasure. Sound designer Louis Lopardi’s use of classical musical is uplifting. As Rory tells his mentor Max Planck, “Equations have a kind of beauty – a purity, like a Bach partita.”

In turn, Planck shares his experience of loss at the hands of the Nazis, and how music became his escape from grief. In this role, Russell Saylor sensitively portrays the father of Quantum Theory, while fortunately injecting some comic relief as well.

With costumes that include Newton’s 17th century getup and tourist garb for the Americans, Elena Vannoni’s designs capture the clash of humor. Joyce Liao’s lighting, at times stellar, at others florescent, sustains the texture of the work…it’s ebb and flow. Along with Katerina Vitaly’s video projections, we see planets beyond our own.

As the father of physics tells us, “Einstein was wrong, you know – life is a gamble. Suffering is a bit like gravity – can’t give into it, you know. Want some advice? Learn to live in the mystery. It’s not so bad.

It’s actually fun…the show, that is.

Strings Attached
Pulse Theatre, Theatre Four, Theatre Row, 410 West 42nd Street, NYC.
For tickets call (212) 714-2442, ext. 45, or go online.
Everyone must show proof of COVID-19 vaccination and a photo ID to enter the building and must wear a mask at all times when inside.
Through Saturday, October 1, 2022
Photography: John Quilty