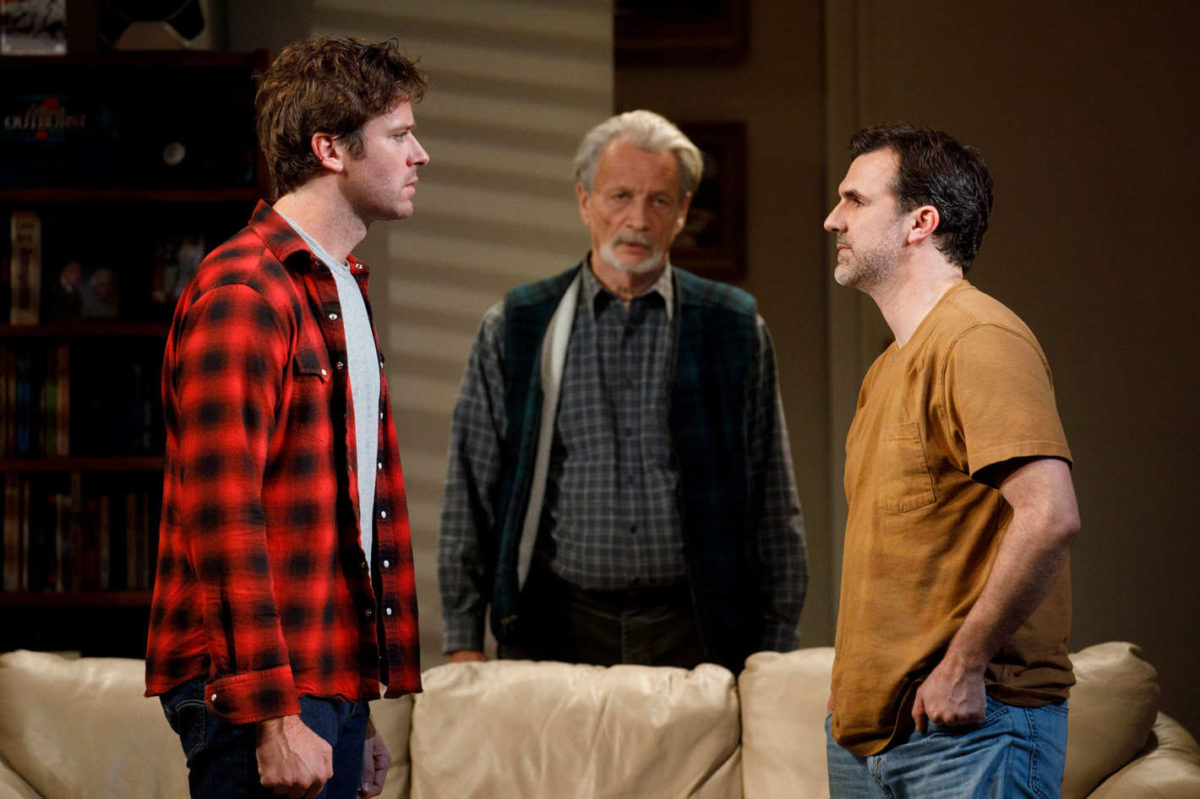 Leading us back to that civilization, as if it were an archeological dig, are our two nonbinary guides, Kate Bronstein, and Ty Defoe, aptly named, Person in Charge I and II. They circulate through the audience before the show, introducing themselves and offering us ear plugs for the music that is blasting, and continues until the play begins.

Now it’s Christmas and dad’s three 40-something sons are home for the holidays. Jake (Josh Charles), a successful banker recently divorced, and his brother Drew (Armie Hammer), a college professor and novelist, engage in the roughhousing and boy’s play of their childhood. When they can, they get brother Matt (Paul Schneider) to join them, as well as their dad, Ed (Stephen Payne), who is as dynamic and virile as his sons are.

That the performances are so entertaining is the bread and butter of the show. In fact, these straight white men, all gorgeous to look at, are also terrific dancers who enjoy a good hoax.

As directed by Anna D. Shapiro, behaviors that could appear quite offensive – such as the conversation about gay chicken – rubbing one’s balls on someone’s face – are played down here. One notices the fun-loving spirit, rather than the aggressive male behavior. In fact, these guys would probably do well in a gay environment. So much for labels.

It’s this kind of labeling that provokes Jake and Drew to probe their brother Ed, a Harvard grad, who has returned to live at home, and works at a job that pays the minimum wage. His rejection of labels is only one side of the story, at least to his brothers, who fear that his inability to assert himself speaks to a deep depression.

Still, it’s Matt’s existential quest which puts the story in perspective. A white man who has invested his life in protecting the civil liberties of others, Ed can’t it make it work. The labels, be they “Harvard Grad,” or “white and privileged” are too constricting.

It’s also what Person in Charge 2 tells us at the onset of the show, “Kate and I are well aware that it can be upsetting when people create an environment that doesn’t take your needs into account.” Indeed, there is a sense in which each of these family members dwells in situations that aren’t as successful as they may want us to believe.

Marked by the strength of the acting, the production is engrossing, with the physical life of these four charismatic men creating the life of the story. Armie Hammer (Call Me By Your Name), Josh Charles (The Good Wife), and Paul Schneider, give highly charged physical performances. Stephen Payne, with his resounding voice makes for a very appealing dad.

In this family room, designed by Todd Rosenthal, with plaid shirts and pajamas by Suttirat Larlarb, and friendly lighting by Donald Holder, the sitcom unfolds.