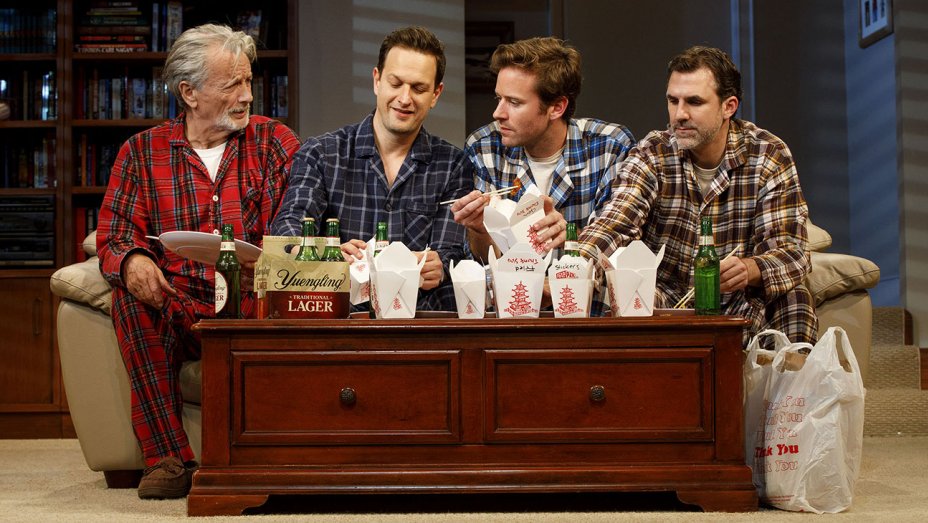 Young Jean Lee’s Straight White Men marks the first Broadway production by a female Asian-American author and she takes the unexpected turn of sympathizing with the plight of her title characters, usually the ones on top. Originally presented Off-Broadway at the Public Theater in 2014, this combination dark comedy and satiric  “living-room” drama explores the cultural attitudes of a family wrestling with the effects of privilege. Three upper-middle-class WASP brothers and their widowed father celebrate a boys’ Christmas—engaging in roughhouse horseplay and examining their life choices. The former can be pretty monotonous and the latter is sometimes pretty dry, but director Anna D. Shapiro and her vibrant cast infuse zest and sting into what could have been a staged doctoral thesis.

The opening is deliberately off-putting. From the opening of the house until curtain, the audience is greeted by high-decibel rap music with indistinguishable lyrics, bright strobe lighting, and a tinsel curtain. Once the house lights snap off, two performers of fluid gender and sexuality (Kate Bornstein and Ty Defoe) dressed by costume designer Suttirat Larlabb in what appear to be turquoise ringmaster outfits, step in front of the curtain and explain the author’s intention to put the title species under the microscope. The tinsel curtain rises on Todd Rosenthal’s suburban rec room set, surrounded by a giant frame and labelled “Straight White Men” as if we were viewing an exhibit at a museum.

Not much happens for the first hour or so in the way of plot, except for the four males alternating between stereotypical jocular behavior and ruminating on their status in this age of minority ascension. The minimal action is triggered by eldest sibling Matt breaking down in tears during the traditional Christmas Eve Chinese take-out dinner. After graduating from Harvard, Matt has moved back home and works as an office temp for a non-profit. His more successful brothers Jake, a banker, and Drew, a novelist and teacher, cannot fathom his lack of ambition and contentment at performing the traditionally female role of cooking and cleaning for their dad Ed. Lee employs this loose structure to examine the white-male attitude towards a changing society where their alpha status is no longer relevant. The literal framing device and the introductory figures (listed as Person in Charge 1 and 2) are unnecessary, but Lee makes pointed observations on cultural stereotypes and raises intriguing basic questions about the meaning of success and happiness in our materialistic, label-driven world.

As Matt, Paul Schneider has the most difficult acting task since his character has no clear, strong objective. Matt claims not to be depressed and dissatisfied about his lot, yet he never examines or explains his teary outburst. Schneider subtly captures both the remnants of Matt’s boyish bluster and adult uncertainty. In his Broadway debut, Armie Hammer exudes charm and genuine concern as Drew while Josh Charles embraces Jake’s childishness as well as his self-awareness (Jake acknowledges he’s an asshole). Stephen Payne makes for a believable, bewildered Ed.

The play is a weird blend of traditional family drama in the Arthur Miller vein, and a meta-view of those plays. It’s funny and entertaining, yet distant and cold at the same time.

Tracey Letts’ Mary Page Marlowe at Second Stage’s Off-Broadway space is somewhat more conventional, but not entirely. The script follows the title character from literal baby boomer to hospice patient, played by six actresses and a plastic infant doll, but not in chronological order. Eleven scenes depicting turning points (deaths, marriage, affairs, etc.) are shuffled like a deck of cards and presented in seemingly random order, but each segment bears a link to the one before and after it. Letts has previously written about the existential angst in everyday life in such works as Man from Nebraska and Superior Donuts. He went over the melodramatic top in the Pulitzer Prize-winning August: Osage County, but I found this intimate series of snapshots quietly moving.

Like Lee, Letts can be a bit too on the nose. Scenes reinforcing the theme of the randomness and collage-like nature of Mary Page’s life (a Tarot card reading, a description of a patchwork quilt, etc.) pop up a mite too often. But the majority of the vignettes provide piercingly realistic moments in a woman’s life, unlike Lee’s somewhat clinical and satiric approach.

It’s a complicated script. There are 12 actors in addition to the six playing the title role, and a plethora of locations in Ohio and Kentucky. Yet we are always certain who is who and where we are in Mary’s story. This is due to Lila Neugebauer’s economic and fluid direction, as well as Laura Jellinek mobile set, Tyler Micoleau’s specific lighting and Kaye Voyce’s decade-spanning costumes. The entire 18-person company deliver glittering little cameos, vivid glimpses of not only Mary Page’s story but those of their characters. The most piercing is provided by Kellie Overbey who plays Mary at age 50. In a single scene, she conveys the woman’s repressed emotions, the horror of causing pain to others, and the realization she must pay for her carelessness. It’s a devastating few minutes in a fascinating theatrical mosaic.