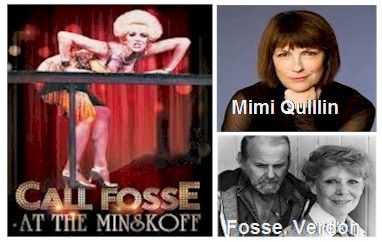 Mimi Quillin is returning to perform the one-woman play she penned about her experiences as a Fosse dancer and assistant to the late choreographer/director, Call Fosse at the Minskoff : A Dancer’s Journey, one-night-only, December 3. It’s a
benefit for the non-profit Steps Beyond Foundation and its Steps on Broadway
arm. It will be at 8 P.M. at Steps Studio Theatre (2121 Broadway at 74th Street). Quillin debuted her play in September as part of the NYC United Solo Festival.

Steps on Broadway “is committed to connecting artists and the community through dialogue, dance scholarships, performance, and artistic collaboration.”

In 1985, when Bob Fosse and Gwen Verdon joined forces for a revival of Fosse’s 1966  Sweet Charity, score by Dorothy Fields and Cy Coleman and book by Neil Simon
(adapted from Fellini’s saucy Nights of Cabiria), Quillin was invited
into their creative world not only to play the role of Mimi but also to assist
as dance captain – all a result of a fateful meeting with Gwen Verdon while a
dancer American Dance Machine.

“Gwen had been observing me and came over,” explains Quillin. “We chatted briefly and she handed me a note which read ‘Call Fosse at the Minskoff .’ I told her I had
just auditioned for Bob, and thought it had gone badly. In addition to his
phone number, she gave strict instructions on what to wear for my audition. It was that wonderful moment and opportunity that changed the shape of my career.”

Fosse was one of Quillin’s idols, and she had auditioned for him. He said,
“You’re a good dancer, but you look terrible!” It was the very next day that she met Verdon, who phoned Fosse to see if he had hired her. He said he hadn’t. When she gave Quillin the note scibbled on a torn off corner of an envelope, she told her, “He might want to see you again.” Verdon literally dressed her new friend “from head to foot and in much sexier clothing.”

Verdon told Quillin that she reminded her of herself, “not much up close, but
put me onstage and I light up.” Quillin took that as the ultimate compliment.
At her call back, so to speak, Fosse “put me through a complete chorus audition
all by myself.”  At the end, he told her, “Gwen was right about
you. What an eye she has!”

Quillin says that Fosse and Verdon, still
married at that point, “were inextricably linked artistically and through the
heart. Their relationship, while puzzling to outsiders, was rock solid. Gwen
was the one  with him when he died. I have this image of Gwen as
Bob’s ‘second,’ as in dueling. She protected him to the end.”

Dancing for Fosse was “a roller coaster ride
for both body and soul,” states Quillin. “It’s not secret he was tough. His
choreography required physical discipline and complete surrender to his
masterful signature style. Bob directed his dancers like actors, telling them
to think of the steps in a dance like words in a script. He’d say, ‘Dance the
meaning of the steps. Don’t try to be real, just tell the truth and the
audience will come to you.’

“Working with Bob,” she continues, “you stepped on the gas the first day and
never let up. Everyone comes in with one thousand percent. In fact, working so
intimately with Fosse and Verdon was more
than just a job. It became a time of incredible self discovery and empowerment.” 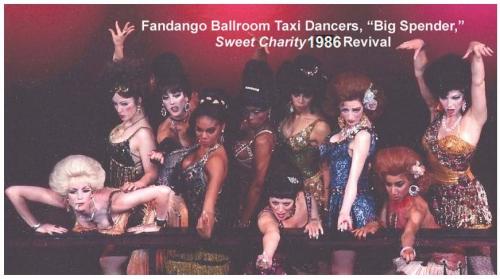 In her play she shares “a professional relationship, with the highs
and lows of Bob’s final years. It reveals his fickle nature both on and off
stage, and provides an inside look into the unique relationship of this
fascinating couple.”

There’s been high praise for her up-close-and-personal story, “which is filled
with comedy and one-liners. It’s as if Quillin is channeling Gwen Verdon.”

Quillin went on to appear in Ain’t
Broadway Grand (1993) and Ragtime (1998),  her last Broadway
outing. She remained in touch with Verdon, working with her again on a Broadway
Cares/Equity Fights AIDS fundraiser – and stays in touch with Fosse’s “family
of dancers.” Quillin has danced and choreographed here and abroad. She also
teaches the Fosse/Verdon legacy in master classes.

Sweet Charity was Tony-nominated for Best Musical, with
a win for Fosse as choreographer and nods to him as director, Verdon, co-star s
John McMartin (Oscar) and Helen Gallagher (Nickie), and score. It played 308
performances. Christina Applegate starred in a 2005 revival.

Benefit tickets for the one-night-only Call Fosse at the Minskoff: A Dancer’s Journey are $50, which, includes a post-performance reception. General admission tickets are $20, $15 for students. To purchase, visitwww.stepsnyc.com/steps-beyond. For more information on Steps Beyond Foundation and Steps on Broadway, visit www.stepsnyc.com.