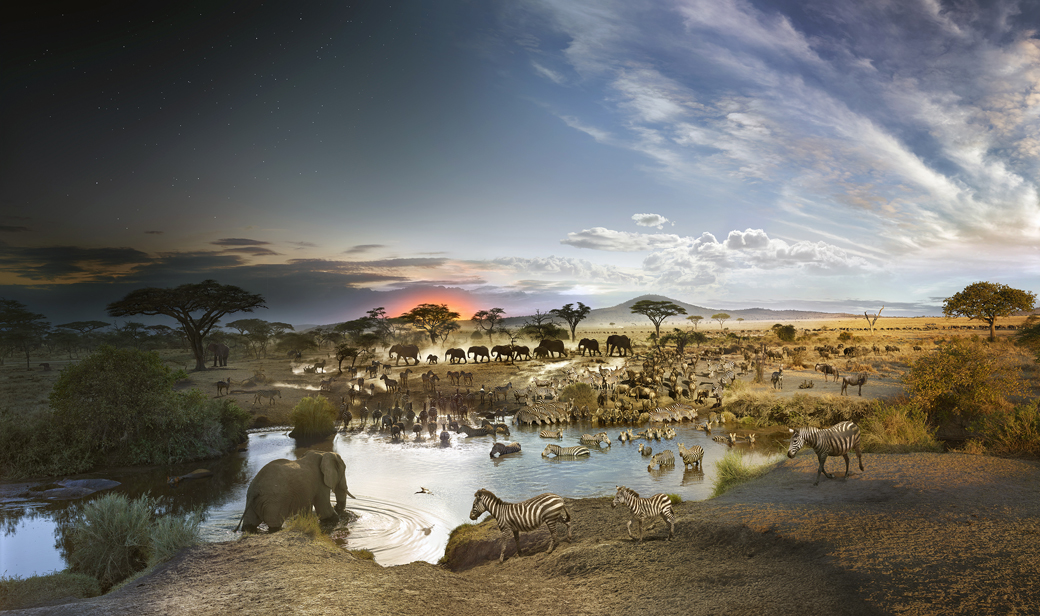 Stephen Wilkes carried the idea of day-to-night images for a long time. … Wilkes’s book, Day to Night, could be published late fall by Taschen.

A single image in Stephen Wilkes’s “Day to Night” series is composed of an average of 1,500 frames captured by manual shutter clicks over a period of anywhere from 16 to 30 hours. During this process, Wilkes must keep his horizon line straight and maintain continuity, which means keeping his camera perfectly still.

He then spends weeks in postproduction, piecing the best frames together into a final composite of layered images, essentially compressing time. For Wilkes, the excitement is in showing people something more than a photograph, something that provides a multidimensional experience, a window, as he describes it, into a world where the full spectrum of time, light, and experience plays across the frame. We’re treated to a view we’ve never seen before—one our eyes could never take in on their own.

Out in the field, Wilkes commits himself to a tiny perch high above an urban or natural landscape. From here he’ll watch a narrative unfold: living beings interacting with their environment as light and time progress. He calls this vantage point the “ultimate catbird seat” —where he can partake in the joy of looking while being unnoticed by the players in the scene below him.

His process is meticulous and precise. “I look at a single place in a grid,” he says. “And then I decide where day begins and night ends.” Whatever that angle is—whether it’s diagonal, up and down, front to back, back to front—becomes what Wilkes calls the time vector. “My eye moves through the scene based on time. My focus changes based on where time is.”

Wilkes fixes his camera on that angle, then trains his eye on the scene before him, pressing the shutter when he sees a moment he wants to capture. “It’s the ultimate brain puzzle,” he says, “like a sudoku on acid.”

During the photographing of these images, Wilkes doesn’t sleep, aside from a brief meditation here and there (though his assistant is instructed to shout if he sees anything). He doesn’t take breaks unless the sun or moon are in the right position and missing a few frames wouldn’t create a gap as the light transitions throughout the day.

There are no do-overs. He is at the complete mercy of the elements, riding out a thunderstorm in a crane full of electrical equipment or hoping that an advancing weather front won’t obscure a sunset on what was an otherwise perfect day. “I go out with real positive energy,” he says. “And I don’t really give it up. Because I just never know. And sometimes when it can be the most dire situation in terms of the way the weather looks, it can bring you the most spectacular things.”

And what gets him through these extreme tests of mental and physical endurance? “I am a collector,” he says. “When you are a collector and you are missing that one piece of that collection, you will go through unbelievable lengths. I will wait. I will do whatever it takes. I love collecting moments of magic. That’s what I do.”

What began six years ago as an urban project—a “love poem to New York City,” as he calls it—has evolved to include places around the globe, including natural environments. Below, Wilkes shares some of the stories behind the photographs featured in National Geographic’s January cover story celebrating the power of parks.

Wilkes and his assistant spent 30 hours perched on a platform 18 feet in the air, behind a crocodile blind so the animals wouldn’t see them. The elephant family marched across the frame just as he and his assistant had resumed shooting after taking a break to back up their files (each shoot takes about 20 gigabytes of storage). Had they passed five minutes earlier, he would have missed them.

For the image above, Wilkes spent two weeks in the Serengeti scouting locations and getting permission from the park to photograph—not an easy task, as security around the park at night is tight on account of poachers. He initially wanted to photograph the peak migration but arrived during a five-week drought, when the animals weren’t following their normal patterns. What seemed like a bad card ended up being a boon when he found a watering hole that attracted elephants, zebras, wildebeests, meerkats, and hippos.

Photographing an animal narrative, as opposed to a human one, was a first for Wilkes, yet in doing it he discovered a valuable lesson.

“There’s such a beautiful message in this photograph,” he says. “The animals essentially were starved for water, and they all shared. I watched them for 26 hours [as they] literally all [took] turns drinking, bathing in this single resource. And they never so much as even grunted at each other. You realize the animals really get it. And we have really yet to understand the idea of water [as] a shared resource.”

To capture this view, Wilkes spent 26 hours at a 45-degree angle on a platform tethered to the side of a rock outcropping.

The inspiration for this frame was the Albert Bierstadt painting “Yosemite Valley.” Wilkes brought a print out with him when scouting the location. Getting this view required perhaps the most challenging setup he’s had—tethered, along with two assistants, to the edge of a rock outcropping at a 45-degree angle on an area the size of a four-by-eight piece of plywood. The slightest misstep could have toppled the camera over the edge. “My assistant scouted for me, and we hiked up on the prep day,” Wilkes says. “And I said, ‘Jesus, Brian! You didn’t say it quite was like this! I’m not 14 anymore. Are you kidding me? Twenty-six hours on this ledge? Are you crazy?’”

But once the shoot began, Wilkes’s focus was solely on the ebb and flow of light and people in front of him. “Once I frame the image, what comes over me is a singular focus—the drive to make the image takes over,” he says. “Once I get infected, the sheer beauty of what I’m doing overtakes everything. Whatever my fear is, once I see the scene through the lens, everything changes. I become disconnected from whatever the physical reality is.”

The Tulla Booth Gallery features established and emerging            contemporary photography. We exhibit authentic and beautiful photography in black and white and color. Subjects include: in landscapes seascapes, still-life, flora, fauna, exotic travel, figurative lifestyle, celebrity, and documentary. It is our goal to present iconic images that transcend their subject making them timeless and collectable.

We offer an “Art on Site,” art consulting service for home or office. House calls are great for the client and it gives us a scope of the client’s need as they build a collection of art they love.