“Most People Long for Another Island”

October 11, 2021: Theatre-loving residents of Nassau County (not to mention the nearby borough of Queens) have reason to rejoice in the presence of Plaza’s Broadway Long Island (a name in need of a redo). The county’s only professional (Equity) company, it just opened its agreeable production of Richard Rodgers and Oscar Hammerstein’s 1949 musical classic, South Pacific, the first in an ambitious 2021-2022 musical theater season. Following it will be Man of La Mancha, The Color Purple, and Something Rotten! If you’re still pandemic-hesitant about going to Broadway, why not let Broadway come to you? 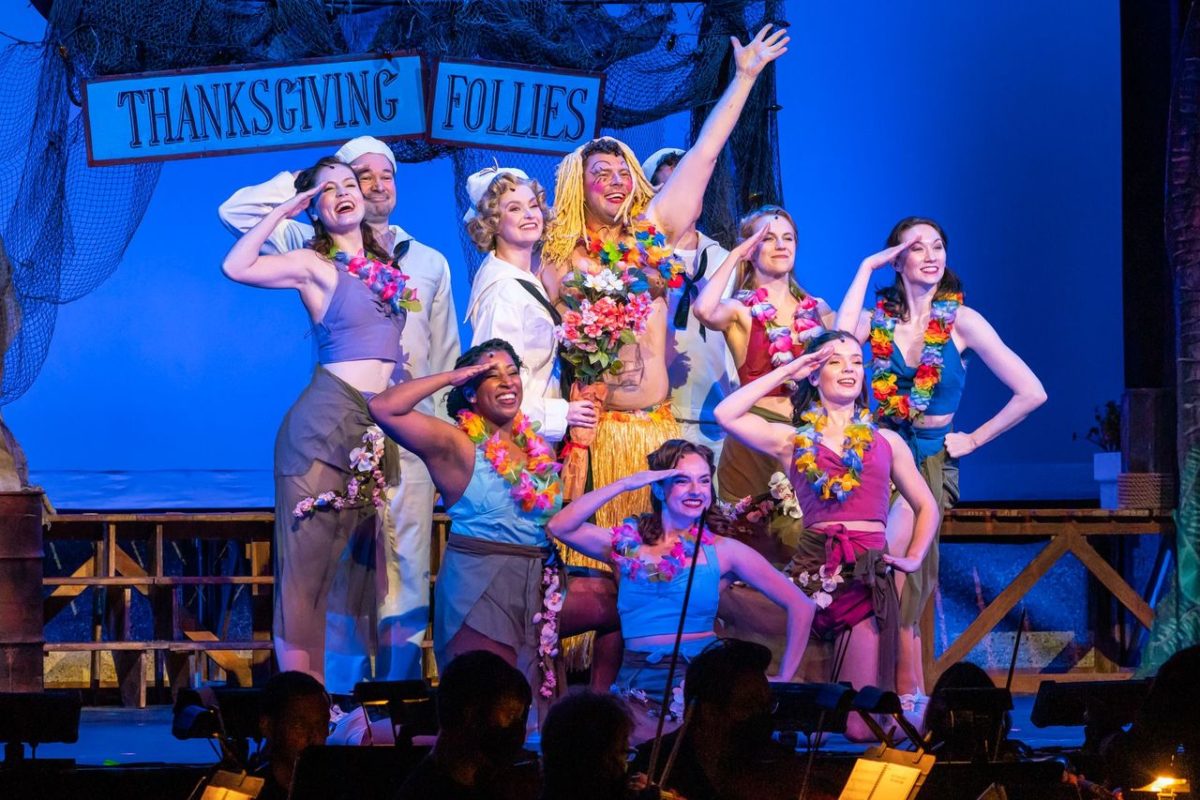 “Most People Long for Another Island”

October 11, 2021: Theatre-loving residents of Nassau County (not to mention the nearby borough of Queens) have reason to rejoice in the presence of Plaza’s Broadway Long Island (a name in need of a redo). The county’s only professional (Equity) company, it just opened its agreeable production of Richard Rodgers and Oscar Hammerstein’s 1949 musical classic, South Pacific, the first in an ambitious 2021-2022 musical theater season. Following it will be Man of La Mancha, The Color Purple, and Something Rotten! If you’re still pandemic-hesitant about going to Broadway, why not let Broadway come to you?

Plaza’s Broadway Long Island is located in the rather capacious Elmont Memorial Library Theatre, just down Hempstead Parkway from the Belmont Park Racetrack. Here director Kevin F. Harrington (the company’s executive producer, who has staged over 250 musicals) has assembled a substantial company of twenty-one amiable actors, supported by a sixteen-member orchestra under the capable baton of Alex V. Harrington.

Fans of the show’s evergreen score should have no difficulty appreciating the fine singing of its memorable playlist, many of whose songs have multiple covers by the foremost pop stars. To remind you: South Pacific’s score includes “Dites-Moi,” “A Cockeyed Optimist,” “Some Enchanted Evening,” “Bloody Mary,” “Nothing Like a Dame,” “Bali Ha’i,” “I’m Gonna Wash that Man Right Outa My Hair,” “Wonderful Guy,” “Younger than Springtime,” “Happy Talk,” “Honey Bun,” “Carefully Taught,” and “This Nearly Was Mine.” While most of these might still set aflutter the musical hearts of seniors, one wonders about those who are younger than springtime.

South Pacific is set during World War II on two islands. It was inspired by James Michener’s 1948 Tales of the South Pacific, a loose collection of tales adapted by Hammerstein and Joshua Logan (the original director). It depicts life among the Seabees (the U.S. Navy’s Construction Battalion), their military commanders, and a team of female nurses.

Against a background of danger represented by the Japanese, one of the nurses, the sprightly Ensign Nellie Forbush (Madison Claire Parks), falls for a widowed French plantation owner with a past, Emile De Becque (James Sasser). That past includes two children with a Polynesian wife, which gives the script a slice of social commentary when Nellie, a native of Little Rock, Arkansas, is forced to confront her racist prejudices.

A secondary romantic plot involves the love affair between the handsome, Princeton-educated Lt. Joe Cable (Andrew Brewer), and Liat (Junko Yasuda), the young daughter of the bawdy Tonkinese trinket seller, Bloody Mary (Lydia Gaston), who pimps her off to the American officer. Fate (and the Japanese), however, have other plans for Cable.

And, of course, there’s the comic relief supplied chiefly by the conniving, entrepreneurial Seabee Luther Billis (Jordan Bell), whose highlight comes when he dons grass skirt, mophead wig, and coconut bra for the base’s Thanksgiving show.

The musical theatre has changed considerably since South Pacific, whose libretto-heavy sections, a once potent combination of wartime tension and romantic fantasies, now tend to drag as we wait for the next great song. Even the treatment of the racist theme, leading to the number about how such feelings are taught, not inborn, seems a tad strained, in dramaturgic terms, despite its obvious relevance. When well sung, however, as here, Rodgers’s glorious score and Hammerstein’s brilliant lyrics help a bit to forget such drawbacks.

Kevin Harrington’s no-frills staging is straightforward and non-obtrusive. But this is a nearly three-hour show that needs to move more swiftly if it’s going to make our hearts race faster. For example, one wonders whether an extended opening bit in which the cast sings “The Star-Spangled Banner,” followed by a rather lengthy overture, might be abbreviated. More seriously time-consuming, though, are the dead spaces during the many scene shifts; might these not have been choreographed so that we see them happening as the next scene begins?

Brett Martinez’s attractive, palm tree-bordered set, supplemented by small units for specific locales, relies greatly on an upstage area dominated by the wide swath of a cyclorama. It might work better if Glen Davis’s lighting were more successful in conjuring up a South Seas atmosphere. There are also a number of focus issues leaving faces dimly lit that need to be addressed. Barbara Kirby’s effective costumes, however, pull everything together with just the right touch of period feeling. One does wonder, though, as always, just how Nellie, a nurse assigned to a South Seas island in the midst of a world war, manages to show up in one scene wearing a sophisticated evening gown.

Then there’s the staging of Nellie’s “I’m Gonna Wash that Man Right Outa My Hair.” In the original production, Mary Martin famously cut her hair short so she could actually give herself a quick-drying shampoo at each performance. Subsequent actresses have either gone that realistic route or faked it with phony suds gently rubbed on their carefully coiffed locks or wigs. Miss Parks does the latter, which I’ve always felt greatly weakens the scene.

Happily, Miss Parks brings her porcelain-pretty looks and greatly appealing charm to the routine, helped by Merete Muenter’s choreography. She has a standout voice with an impressive range that allows her to sail effortlessly through both the comic numbers and the soaring ones. James Sasser’s lightly-accented Emile has both the necessary gravitas and the rich, powerful baritone required for a role created by the great opera singer Ezio Pinza. You wouldn’t want less of the guy who sings “Some Enchanted Evening” and “This Nearly Was Mine.”

Andrew Brewer, athletically trim, makes a hunky, natural Lt. Cable, singing “Younger than Springtime” with feeling, although some of the high notes are a bit shy of where they should be. Jordan Bell does his energetic best to make Luther funny; it’s not his fault that much of the humor is dated. And Lydia Gaston, who’s played Bloody Mary elsewhere, gives her vivacious flair, weaving a magic spell with “Bali Ha’i.”

I’ve always had a feeling of personal connection to South Pacific.In 1950, when I was ten, I saw my first production, not with Mary Martin but with Martha Wright, her replacement. It’s amazing how much of that night I still remember, when shows I saw this month are already fading. In 1960, I played the Professor in summer stock. And, as noted, I’ve seen many revivals over the years. The libretto may no longer be a hundred and one pounds of fun, but South Pacific’s score can still provide the better part of an enchanted evening (or matinee). Call me a cockeyed optimist, or, better yet, an impossible dreamer, but I’m already looking forward to Man of La Mancha.