December 14, 2022: Regardless of what Rodgers and Hammerstein may have said, there has always been something like a dame, namely, men who dress as dames. And from The Bachhae to Charley’s Aunt to Tootsie and so on, the theatre has never let us forget it. Pentheus may have lost his head (and a few other parts) in the first of these, but by and large, the object has been to ignite laughter, as we are yet again reminded in Some Like It Hot, the sensational new Broadway musical at the Shubert Theatre, loosely based on Billy Wilder’s still hilarious 1959 movie. 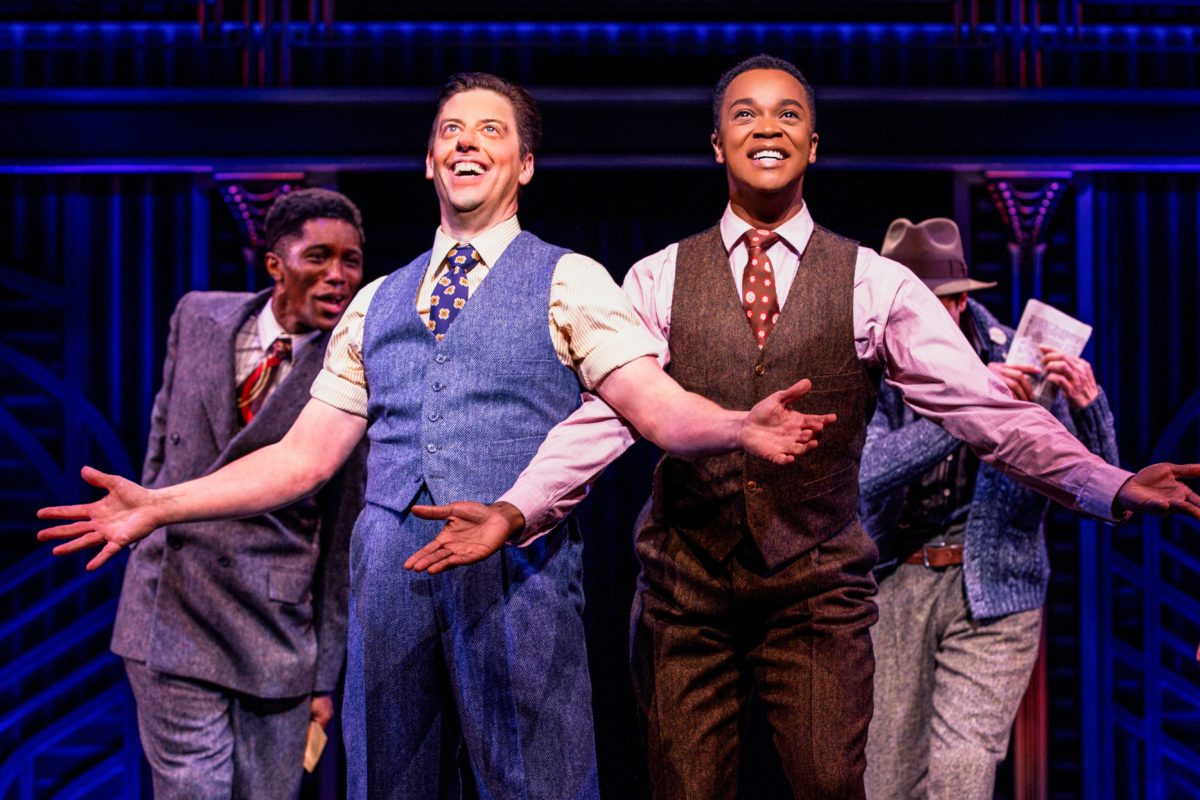 Christian Borle and J. Harrison Ghee in “Some Like It Hot”.

December 14, 2022: Regardless of what Rodgers and Hammerstein may have said, there has always been something like a dame, namely, men who dress as dames. And from The Bachhae to Charley’s Aunt to Tootsie and so on, the theatre has never let us forget it. Pentheus may have lost his head (and a few other parts) in the first of these, but by and large, the object has been to ignite laughter, as we are yet again reminded in Some Like It Hot, the sensational new Broadway musical at the Shubert Theatre, loosely based on Billy Wilder’s still hilarious 1959 movie.

The flick is usually available somewhere in TV etherland, but, if you’re planning to see the show, and haven’t seen the film, you should maybe wait till afterward for the latter so you don’t go in with undue expectations. Jack Lemmon and Tony Curtis as the male leads, and Marilyn Monroe as the female are as indelible as a Sharpie marker, which is probably why the show cleverly diverts your attention by going in radically different directions when casting their roles.

Matthew López and Amber Ruffin’s spiffy book retains the basic plotline of Wilder’s script but makes multiple changes to convert it into something fresh (differing also from Sugar, the 1972 Broadway musical based more closely on the original). In all versions, two jobless Chicago musicians, sax player Joe (Christian Borle) and upright bass player Jerry (J. Harrison Ghee), witness a gangland slaying by Spats Palazzo (Mark Lotito) and his hoodlums. Hunted by the gangsters, Joe and Jerry assume drag disguises as Josephine and Daphne, joining an all-girls band embarking on a tour to a warmer clime by train. Joe falls for the band’s stunning star, Sugar Cane (Adrianna Hicks), and, when they reach the fancy hotel representing their final destination, Jerry becomes the object of affection for goofy millionaire Osgood Fielding, Jr. (Kevin Del Aguila). Eventually, the bad guys show up, hell breaks loose, and things end happily for all except the bad guys.

In the new show, Borle’s Joe is no longer drop-dead gorgeous and, in glasses, makes a downright homely Josephine; he’s also meant to be no longer young, with numerous gags about his age. Tony Curtis’s classic scene where he woos the millionaire-hunting Sugar by dressing in yachtsman’s clothes, wearing funny glasses, and imitating Cary Grant, has been converted to one where he wears a tuxedo, and poses as an Austrian-accented scriptwriter to romance Sugar, whose goal is to be a movie star.

Ghee’s Jerry, by far the prettier of the pair, is a basketball player-tall African American, a head taller than Joe. Sugar, whose band is racially mixed, under the baton of a Black leader, Sweet Sue (NaTasha Yvette Williams), is also Black. The script doesn’t ignore the interracial possibilities, but, aside from a few timely jokes—like Sweet Sue’s dumbfounded reaction to a question about whether her racially diverse band is headed South—doesn’t dwell on them.

The period has been moved up from the Roaring Twenties to the Depression year of 1933, just before Prohibition ended, and the tour ends up, not at a Miami hotel but one in San Diego, allowing for an excursion to Mexico, mariachi music included. And, given the cross-gender playfulness of the story, it doesn’t shy from present day attitudes in commenting on sexual power dynamics or gender fluidity. This is especially when, to her surprise (“You Could Have Knocked Me Over with a Feather,” she sings), Daphne discovers from the experience that she’s found her sexual comfort zone. On a couple of occasions, in fact, her reactions spark whoops of approval from sections of the audience.

So, regardless of the various shifts in character, locale, and time, the solid Wilder bones are still there, and the new flesh covering them works perfectly in the context of musical theatre. Stylistically, the show sends off echoes of other show biz or gangster musicals, from Guys and Dolls to Legs Diamond to On the Twentieth Century to Tootsie to Bullets over Broadway, but it keeps you on your toes (whoops! there’s another one) from beginning to end as Scott Pask’s fast-moving, Art Deco-inflected scenic units slide in and out, up and down.

They carry us from night clubs to trains (sorry, though, the movie’s crowded Pullman car is reduced to a crowded bathroom), to hotel lobbies and rooms, to a restaurant, to a yacht, and so on. Natasha Katz’s lighting adorns the sets with her usual magic, Gregg Barnes’s period costumes couldn’t be better, and Josh Marquette’s hair designs are the cherry on top of this musical sundae.

Brilliant director-choreographer Casey Nicholaw outdoes himself with machinegun-paced staging and thrillingly conceived and executed choreography, much of it tap danced, performed by a remarkably lithe and energetic company that seems to have discovered the same secret of nuclear fusion being reported in the breaking news. From the rousingly rhythmical opening company number, “What Are You Thirsty For?,” led by the extraordinary Miss Williams, who scores both vocally and comically, to the remarkably deft tap numbers featuring the awesomely multitalented Mr. Borle and Mr. Ghee, Some Like It Hot is on fire to please. Add to this the similarly luminescent capacities of the dazzling Adrianna Hicks, whom this show makes a verifiable star, and the surprisingly adorable Kevin Del Aguila, with his hilariously squirmy dance movements that make it look as if he’s swallowed a corkscrew, and you’ll agree that Some Like It Hot is a gift that keeps on giving.

And when we arrive at the truly great chase scene near the end, which, though not a song, is a veritable eleven o’clock number, we can only acknowledge the sheer genius that inspired it. We watch with mouths agape and eyes a-bulging as the company manipulates a half-dozen wheel-affixed doors while bellhops, chorines, gangsters, lovers, and cops fly, slide, and run in and out of them. It’s about as classic and complex a piece of choreographic legerdemain as you’re ever going to see in a long lifetime.

To top things off, composer and co-lyricist Mark Shaiman (Hairspray) and co-lyricist Scott Wittman (Hairspray) have created a full-blooded body of jazzy, often witty songs in the grand old Broadway tradition, songs that get your pulse racing, and extremities tapping. A touch of big band pastiche runs through many numbers, although an occasional song, like Sugar’s “Ride Out the Storm,” sounds more 2022 than 1934. On the whole, though, the sounds—including lots of scat singing—are sufficiently in touch with the early thirties to satisfy most listeners. There are, of course, a couple of lyrical numbers, always necessary to offset the abundance of big, peppy routines. The quiet, simple one I was hoping for comes in the first act of the two hour and 20-minute show, when Sugar sings “At the Old Majestic Nickel Matinee.” I was a little disappointed that nothing comparably low key follows in the second act.

One thing is certain. Whether you like it hot, cold, or even in the pot, nine days old, you’re probably going to like this show.