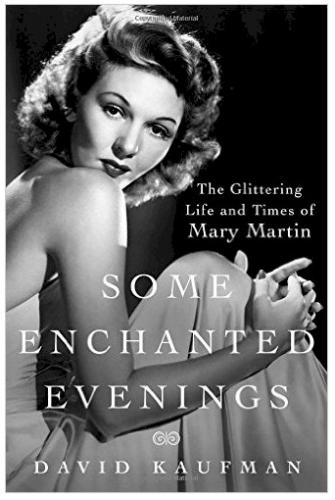 For most of five decades, she was Broadway’s “it” girl who could create lines around the block and sell a show out for a year or more with the first ad. She was a star of the first magnitude, and the highest paid, matching wits with the erudite Noel Coward; wined and dined by and with A-List celebrities; and on the phone – several times a week, with powerful columnist and right-wing “Commie hunter” Hedda Hopper, a confidante she met while pursuing a film career.

That was Mary Martin the star, but there was something about the double life she lived – one, with her name in lights; the other, closeted, that remained a mystery.

You won’t find all the answers, probably because no one still alive could, in the massive Some Enchanted Evenings: The Glittering Life and Times of Mary Martin (St. Martin’s Press; 420 pages; Eight page B&W photo album, plus full-page B&W; Index; SRP $30) by David Kaufman (Doris Day: The Untold Story of the Girl Next Door; theater critic).

The first challenge for a biographer is to track down the subject’s survivors and gain cooperation. Since Martin died in 1990, a month shy of turning 77, explains Kaufman, “most of her colleagues and friends were long since gone seven years ago when I began my research.”

He began considering his biography in 2003, and fortuitously interviewed key players in the lives of Martin and second husband/manager Richard Halliday. These included Paula Laurence, who was in One Touch of Venus; and Willard Shaffer, David Merrick’s production supervisor who toured with Martin for a year with Hello, Dolly and I Do! I Do!, and Sondra Lee, forever famous as Peter Pan’s Tiger Lily. “They provided crucial insights and delicious anecdotes,” he states. “But I became side-tracked with another obsession: a (massive, no-holds-barred) biography of Doris Day.”

He supplemented the interviews with quotes from Martin biographies and magazine articles — all credited in 38 pages of Notes and bibliography. Though he covers Martin’s good times, hits, flops, pain, and what is known of her and Halliday’s private lives, the book often seems more reference, too studious than lively. 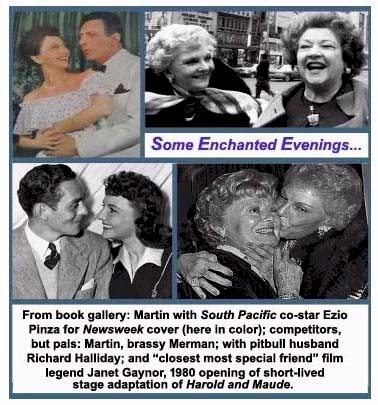 It chronicles Martin’s early life in Texas: the daughter of a lawyer and music teacher/violinist. She loved show tunes, sang and danced, but tooled around town as more of tomboy. At 14, she fell head over heels for strapping19-year-old Benjamin Hagman, a Texas Christian University law student and star footballer. When they began dating, her parents sent her o finishing school, where she became a hit singing at social functions. She and Ben secretly married in 1930 during a break from school. Martin sang “Oh, Promise Me” at the ceremony. She later wrote “I got married to avoid writing a term paper.” It didn’t take long for her to breaking not only promises but also vows.

Kaufman sorted conflicting stories regarding the marriage. He discovered a marriage license in a Kentucky city hall, and came to believe it was filled out after the fact to cover some tracks. “Mary claimed to be 18,” he points out, “but was two years younger. The ceremony took place after she was pregnant with their son Larry, born September 1930. She declared, ‘How hillbilly can you get?’”

There was no honeymoon, as she had to rush back to class. Though they made a stab at married life, with Hagman joining her father’s firm and Mary starting a dance studio, “neither of us were ready … and we were miles apart in other ways.” Larry Hagman, in his 2001autobiography, Hello, Darlin’: Tall (and absolutely True) Tales About My Life, wrote that his mother “was a kid herself, too young to be a wife, too young to be a mother, and too full of ambition to settle down.”

Martin was soon divorced and, leaving her son in granny’s care – for 12 years. This abandonment caused Larry to have a huge grudge against his mother for most of her life. Mary headed West to claim the stardom she was destined for. While waiting for her big role, she became known as “Audition Mary.” At an early one, Oscar Hammerstein II, in an omen of things to come, praised her singing. There was hope.

Under contract to Paramount, she starred with Bing Crosby, Don Ameche, Oscar Lavant, Allan Jones, and made a cameo in the fictional Cole Porter bio pic Night and Day. She starred in films, but never became a “star.” She had a voice, but wasn’t statuesque. At five-foot-four-and-a-half inches, weighing 118 pounds, not terrifically endowed, and because of high cheek bones and the lack of a chin, she wasn’t considered movie-star beautiful.

Top-drawer stars Jean Arthur, whom she idolized and patterned her vocal and physical mannerism after; and Janet Gaynor – whom, later in life, she claimed as “my dearest friend in all the world” and “my closest most special friend,” befriended her.

She later admitted she hated the movies she was in “because they never let me be me”; and wept when she saw one. She recalled turning on the TV in the 70s and seeing a movie she was in, only to discover in a close-up “it was actually Janet.” She felt she didn’t have the “connection” with audiences that she had in live performances.

Go East, young woman, and she did. And to one of the most glorified careers in theater history. Such was her fame that even in later years, at public events when she was introduced, she created near pandemonium.

Shortly after arriving in New York in 1938, she was sent to audition for a show – and showed she’d become savvy to the ways things were done. “I had learned if I sang one song, and stopped I never got another chance … I sang so many different ways – blues, sweet, high, low.” She announced, “I will sing four songs. If I can’t, I don’t wish to sing at all.”  At the end, asked if she’d ever been onstage, Martin replied, “Whatever it is, I can do it.” She was introduced to stars Sophie Tucker, Victor Moore, and composer Cole Porter, but didn’t know he was the composer of the score.

Later that day, she was asked to come to the Imperial, where Leave It to Me!, a musical about a millionaire who becomes the Russian ambassador through his ambitious wife who had connections to President Roosevelt. “It was the first time I was ever scared,” she said. The featured singer had left to marry a Texas oil magnate. Martin was cast in the role. Her big song was the slightly risqué (for then) “My Heart Belongs to Daddy,” which she sang in a skimpy white fur jacket at a Siberian rail station. She was surrounded by six male dancers — one of whom was Gene Kelly in his Broadway debut.

Martin sang the song without any meaning of Porter’s shrewd lyrics; and her air of innocence sweetened the moment. It stopped the show. She stole the show, became the toast of the town, and made the cover of Life. Martin was on her way.

Mary Martin’s notable career was comprised of the 11 Broadway roles she originated and the two megamusicals she either took to the West End or toured nationally. Some say only five of the Broadway shows were classic: Kurt Weill, Odgen Nash, and S.J. Perelman’s One Touch of Venus; Rodgers and Hammerstein’s landmark, trendsetting South Pacific; Jerome Robbins’ production of Peter Pan, with a score by Mark Charlap, Carolyn Leigh, Comden and Green, Bernstein, and Trude Rittman; Rodgers and Hammerstein’s The Sound of Music; and Tom Jones and Harvey Schmidt’s I Do! I Do.