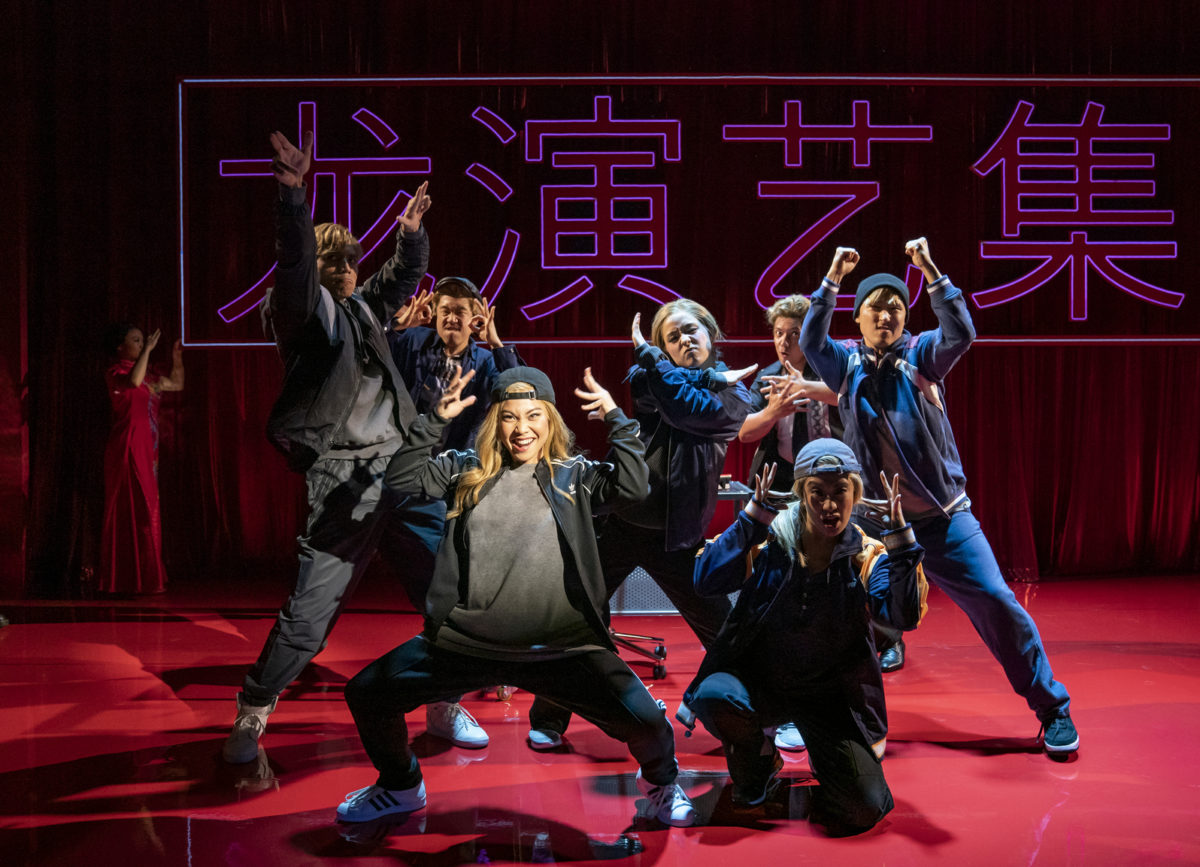 The company of “Soft Power”

The inspiration comes from an actual horrific event that occurred to Hwang. On the morning after Donald Trump’s presidential triumph, the playwright was stabbed in the neck by an unknown assailant. (The case still has not been solved.) In the musical’s alternate universe, an Asian-American playwright referred to as DHH is recruited by Xue Xang, a Shanghai-based producer, to write a splashy musical based on a popular Chinese rom-com. The author and entrepreneur clash over American and Chinese attitudes towards romance and marriage. During the course of their collaboration, they attend a fundraising performance of The King and I for presidential candidate and presumptive winner Hillary Clinton. The unexpected results of the election lead DHH and Xang to question their future in America. Then Hwang is stabbed and the rest of the show is a musical-within-in-a-musical combining elements of the film-based script DHH was working on, references to The King and I, a liaison between Clinton and Xang, and pointed, uncomfortable observations on our political system and cultural stereotypes.

In the most unconventional, bracing choice, Asian performers flip the script and, with one exception (that of the actress playing Hillary), play all the white roles. This parodies the convention of white actors playing Asian roles and introduces various cliches about America, turning the tables on New York audiences as they see how we are viewed from abroad. The Golden Gate Bridge is in New York, all US citizens are armed to the teeth, and MacDonald’s is the height of dining sophistication. Hwang’s book hilariously blends these tropes with his deadly serious barbs on how we elect our officials. Tesori’s versatile score mixes Broadway sounds from both the Sondheim and Rodgers and Hammerstein eras, as well as rap, hip-hop, country-western, Asian, and the blues.

Conrad Ricamora makes for a virile, attractive leading man as Xue while Alyse Alan Louis creates an intensely human Hillary Clinton who is both political cartoon and idealistic woman. As DHH, Francis Jue skillfully leads us through this hall of mirrors while there are spiky supporting turns from Jon Hoche, Austin Ku, Raymond J. Lee, Kendyk Ito and the rest of the versatile ensemble. Set designer Clint Ramos created a wacky caricature world and Anita Yavich’s costumes are as humorous as the relevant, dangerously funny script and score.

Speaking of theater based on real life political events, Tina Satter’s Is This a Room at the Vineyard, goes even further than Soft Power into meta territory. The entire text is comprised of a transcript of FBI agents questioning a former Air Force linguist named Reality Winner in 2017. She was interrogated in her own home and then charged with leaking classified government information on Russian interference with the 2016 presidential election. In 70 tense minutes, Satter and a quartet of actors transform Parker Lutz’s bare set into a chamber of intimidation and fear. Lee Kinney and Sanae Yamada’s metallic sound design recreating the aural landscape of a tape recording adds to the eerie, other-worldly atmosphere.

Reality’s defenses crumble as the agents casually chat about her pets, the groceries she’s carrying (she is just returning from the supermarket), and her workout routines. Her personal space grows smaller and smaller as her questioners take over her home, move closer into her domain and eventually corner her in an tiny space for her cat and dog (hence the title). The subject of the documents is not even directly mentioned and whenever it comes up, the lights black out and sound designers Kinney and Yamada provide an ominous boom representing a redaction. Context would help somewhat (there are explanations in the program), but Satter is after creating a mood of tension and fear and exploring how authority figures by their very presence can easily instill panic.

At first it seemed to me the name Reality Winner was an ironic code name to protect the woman’s identity, but it is in fact her real monicker and, as of this writing, she is still serving a prison sentence. Emily Davis subtly conveys Reality’s reality, her shrinking self-esteem and confidence, and the importance of the subtextual details of her life as they are taken from her. Pete Simpson, TL Thompson and Becca Blackwell underplay the authority and power of the agents, but still impart a sense of intimidation and menace. Room is more about tone and feelings than story. It may be brief and lacking in plot, but definitely leaves you shaken and rattled.

For a more uplifting true politically-themed story, hightail it over the City Center for Manhattan Theater Club’s intimate production of Bella Bella, written by and starring Harvey Fierstein as the late firebrand Bella Abzug, directed with economy and verve by Kimberly Senior. Set in 1976 as she awaits the results of her Democratic primary run for US Senator from New York—she eventually lost to Daniel Patrick Moynihan—this funny and moving solo show retraces Abzug’s career from crusading lawyer to one of the few women in the US House of Representatives to feminist icon. Employing the subject’s own writings, Fierstein lovingly creates a portrait of strength and humor. There is no attempt at imitation or cross-dressing. Costume designer Rita Ryack dresses the actor in gender-neutral pajamas. But Fierstein captures the essence of Abzug’s spirit. Given his history of fighting for and creating positive gay roles, it doesn’t feel odd that he is playing a woman breaking barriers for her gender. John Lee Beatty’s stylish hotel bathroom set becomes a political platform, lecturer’s rostrum, a stand-up comedy stage and a storyteller’s cosy corner in Fierstein’s capable hands.