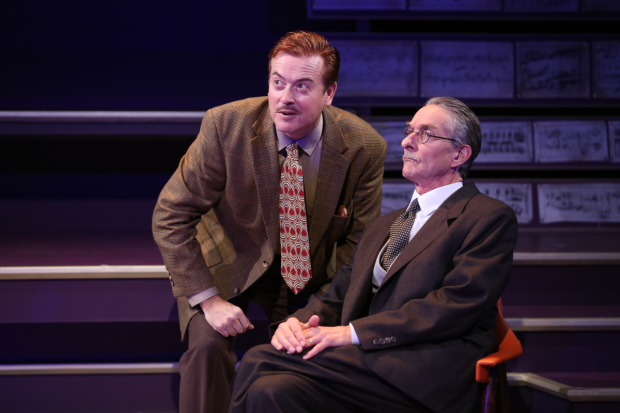 In the first place, Stravinsky personally granted Disney the rights to his Rite of Spring. And when he visited Disney’s studio to observe the work in progress, he posed for pictures with Disney, showing every sign of admiring the animator’s interpretation. In fact, it was only nine years after the film’s release that Stravinsky criticized the film’s “imbecility” as well as the conductor, Leopold Stokowski.

This is not the case in Stroppel’s scenario.

Small world is a series of encounters between the two giants, a battle of wits between the brash, optimistic and outgoing American and the cynical, sophisticated and reserved Russian. The piece begins in the Disney studio and ends … well… where we all end up.

Stravinsky says his ballet is about Russian pagan rites, principally the sacrifice of a virgin girl. Disney sees this segment of Fantasia as battle between a Stegosaurus and a Tyrannosaurus rex. Not surprisingly, much of the conversation centers on the major issues all artists face: artistic integrity, commercialism, aesthetic values, limits to interpreting another’s work. A lot of this may seem old-hat. But in Stroppel’s hands, all these topics glisten like the morning dew. “I put Pluto in Hades,” Stravinsky tells Disney. “You put him in the doghouse.”

Best of all, the show is also funny. And it’s funny in a very smart way. Because when when you come down to it, how could a meeting between two such very different geniuses be anything but a bit absurd?

What’s more, Small World has an unexpected twist in the middle that proves the two men (like all of us) are not exactly what they seem to be, or what they tell themselves they are. Fortunately, the two actors, Mark Shanahan as Disney and Stephen D’Ambrose as Stravinsky, make the transition effortlessly and believably.

Shanahan is excellent as the sometimes clueless animator. He makes Disney’s confidence, love of money and success, and faith in the common man quite lovable. But D’Ambrose steals the show because he accomplishes something much more difficult. He makes Stravinsky’s grandiosity, self-love and scorn for the common man equally amiable.

There isn’t much of a set in Small World. But Christina Watanabe brings us into real and imaginary worlds with her lighting. And there’s all that wonderful music, curtesy of Stravinsky and sound designer William Neal.

Small World runs for a mere 75 minutes. But this play shows once again that good things do indeed come in small packages.