December 18, 2018: The award-winning Broken Box Mime Theater (BKBX) returns with their Off-Broadway production of SKIN, a collection of new collaborative pieces created by the company’s resident ensemble. Set to original music, this new young company takes throwback French pantomime and reimagines it through the lens of contemporary American theatre. 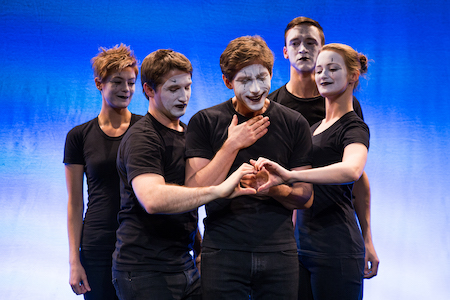 Broken Box Mime Theater troupe in a scene from “SKIN”

December 18, 2018:  The award-winning Broken Box Mime Theater (BKBX) returns with their Off-Broadway production of SKIN, a collection of new collaborative pieces created by the company’s resident ensemble. Set to original music, this new young company takes throwback French pantomime and reimagines it through the lens of contemporary American theatre.

At each performance of SKIN, the company employs the audience to use their imagination, filling in each invisible world with their own ideas and memories, in turn leading to a uniquely engaging theatrical experience. SKIN is led by Artistic Director Becky Baumwoll and is comprised of the same range of stories that have catapulted BKBX among NYC’s favorite storytellers—original plays that run the gamut from farcical comedy to heart-warming drama to contemplative abstraction and every which way in between.

After their triumphant inaugural Off-Broadway production of See Reverse, Broken Box Mime Theater returns Off-Broadway with an all-new collection of shorts in SKIN, an evening exploring themes with deep connection to this simple word and its many interpretations in today’s dialogue—from barriers and race to vulnerability and strength, ultimately culminating in a universal theme of rebirth, something familiar, yet changing.  BKBX’s comedy is highlighted in pieces like “Celebrity Guest Star,” in which a popular sitcom is forced to carry the burden of a truly humorless guest actor, and the fierce competition of impressive manscaping in “The 16th Annual Brooklyn Beard Awards.” The company also touches on hot button contemporary issues in “#Hashtag,” exploring the gray areas of consent and memory on a first date, as well as the attempt of a young man to revise memories of his misogynistic father in the #MeToo era in “Fall From Grace” The more than a dozen short plays in SKIN combine to create an engaging and empowering theatrical experience, all told without a single spoken word.

BKBX is deeply committed to the inclusive nature of theatre and mime, and will offer tailored services throughout the run of SKIN to accommodate all individuals. Relaxed performances will be offered on Sunday, January 27 and Sunday, February 3 at 2pm, providing accessibility to audience members with neurodivergence, as well as families with babies or children who may need to move and verbalize during the performance. A “visual story” is available in advance of every performance, including program notes on each piece and description of the musical soundtrack, for individuals who may need to prepare for their evening in the theatre.

The playing schedule for SKIN is as follows: Wednesdays – Saturdays at 7pm and Sundays at 2pm. Previews begin Friday, January 18 with official opening night set for Thursday, January 24, plus a special added performance on Monday, January 28 at 7pm. Tickets are $25 in advance and $30 at the door, with an early bird special of $20  (if tickets are purchased before December 15).   For more information and to purchase tickets, visit:  www.brokenboxmime.com or by call 800-838-3006.

Broken Box Mime Theater (BKBX) is the recipient of Three New York Innovative Theatre Awards including Outstanding Performance Art, Outstanding Ensemble, and Outstanding Movement/Choreography.  The company mission is  to activate the imagination of audiences, contemporize the art of mime, and remind us all of the power of simple storytelling. BKBX is a collaborative theater company that performs original, contemporary short plays entirely through movement. Based in NYC and founded in 2011, they are breathing new life into the medium of mime. The diverse group of artists who call BKBX their artistic home believe in making innovative, provocative, joyful theater that champions the power of simplicity in performance.  Set to lights and music, their pieces range from realistic to metaphorical, heart-wrenching to hilarious, and cinematic to intimate, held together by the belief that great theater requires little ornamentation, only great vision. The company has collaborated with The Late Show, VICELAND, MTV, Saratoga Arts, The Peoples Improv Theater, Madison Square Park Conservancy, Alliance Française, Bennington Center for the Arts, University of Cambridge, Tufts University, the Actors Gymnasium, IndyFringe, Frieze Art Fair, and MAC.

Becky Baumwoll (Artistic Director) has also directed for Amios, Red Lab Productions and Opera On Tap. She teaches Physical Storytelling to theater undergraduates at The New School, as well as with Clowns Without Borders and Broken Box Mime Theater. As an actor, Becky has worked Off-broadway on TACT’s THREE MEN ON A HORSE and The Pearl’s MAJOR BARBARA and FIGARO, regionally with PRIDE & PREJUDICE at People’s Light & Theatre, and on independent productions with Ozet and Paper Canoe. She is a graduate of Tufts University.

The A.R.T./New York Theatres are a project of the Alliance of Resident Theatres/New York (A.R.T./New York), which provide state-of-the-art, accessible venues at subsidized rental rates, plus free access to top-line technical equipment, so that the city’s small and emerging theatre companies can continue to experiment, grow, and produce new works. Founded in 1972, A.R.T./New York is the leading service and advocacy organization for New York City’s 400+ nonprofit theatres, with a mission to assist member theatres in managing their companies effectively so that they may realize their rich artistic visions and serve their diverse audiences well. We accomplish this through a comprehensive roster of real estate, financial, educational, and community-building programs, as well as research, advocacy, and field-wide initiatives that seek to improve the long-term health and sustainability of the industry. Over the years, A.R.T./New York has received numerous honors, including an Obie Award, an Innovative Theatre Award, a New York City Mayor’s Award for Arts & Culture, and a Tony Honor for Excellence in the Theatre. For more information, please visit www.art-newyork.org.
Photography : Bjorn Bolinder