October 28, 2021: Laugh-out-loud jokes and loud, pounding music are not exactly what come to mind when pondering the plight of Henry VIII’s six unfortunate wives, but you will find yourself laughing and bopping to the beat while enjoying SIX: The Musical,  Broadway’s exciting version of the West End hit by Toby Marlow and Lucy Moss. 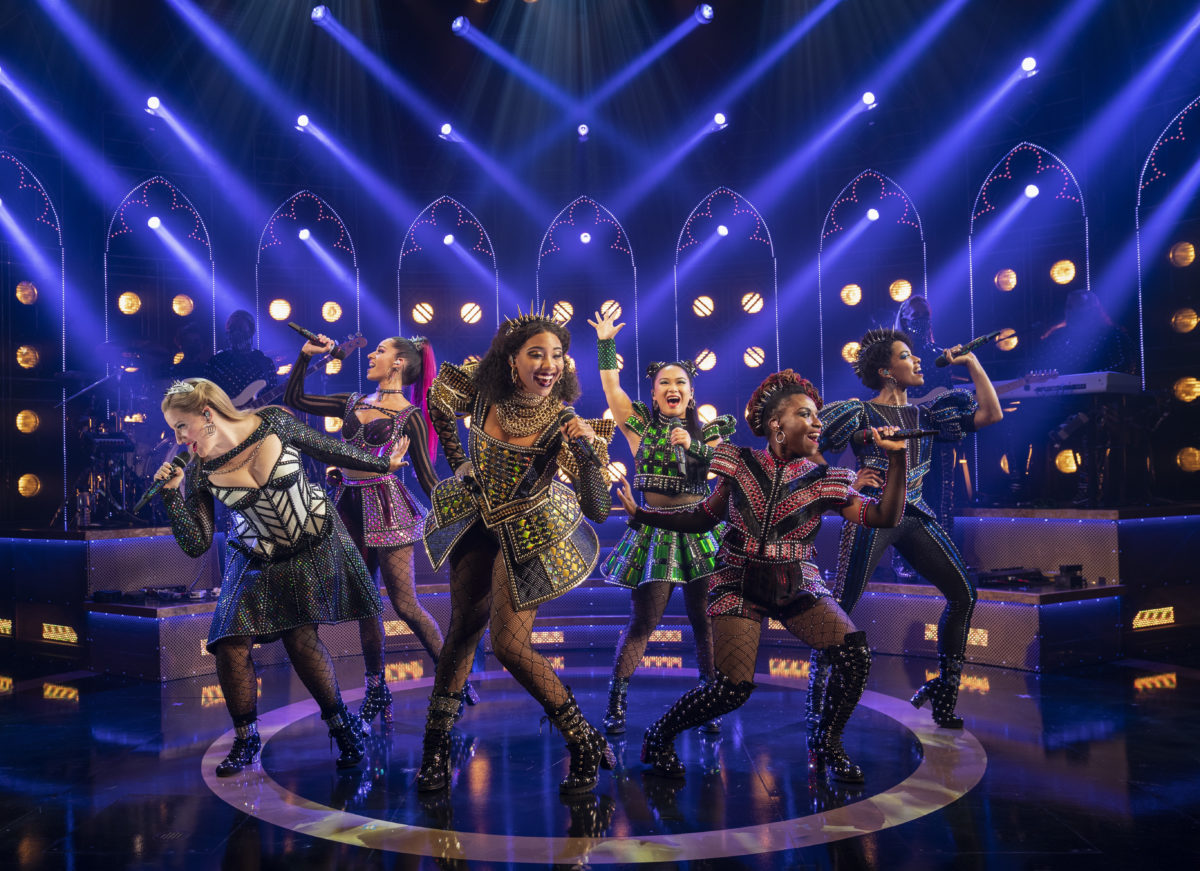 October 28, 2021: Laugh-out-loud jokes and loud, pounding music are not exactly what come to mind when pondering the plight of Henry VIII’s six unfortunate wives, but you will find yourself laughing and bopping to the beat while enjoying SIX: The Musical,  Broadway’s exciting version of the West End hit by Toby Marlow and Lucy Moss.

Directed by Moss and Jamie Armitage, these six women finally get their moment in the spotlight, both in the story and on stage. SIX was one of the tragedies of the pandemic, set to open on the night Broadway went dark back in March 2020. Now, back to tell their stories, the wives compete in a reality-TV mode to see who has the most tragic story from her time as one of the wives of Henry. They each have a song (all done beltingly or balladly beautifully) which explain the theme of their experiences: divorced, beheaded, died; divorced, beheaded, survived.

Here’s a short history lesson for those of you who aren’t up on the six wives of Henry VIII:

Catherine of Aragon (Adrianna Hicks) was Henry’s first wife, but when she couldn’t produce a male heir, Henry turned his eye to the bewitching Anne Boleyn (a very funny Andrea Macasaet). When the pope wouldn’t grant him an annulment, he declared himself the head of the new Church of England, got rid of Catherine (divorced) and married Anne any way.  Unfortunately for Anne, she too only produced a girl (the future Queen Elizabeth I), so Henry got rid of her (beheaded) and married Jane Seymour (Abby Mueller — I saw understudy Mallory Maedke). Henry got his desired son and male heir but lost Jane who suffered complications in childbirth (died).

Next, Henry saw a portrait of Anne of Cleves (Brittney Mack) and summoned her to England to become wife number four. She didn’t look all that fetching in person, however, so Henry decided he wanted out of the marriage (divorce), set her up in a nice palace and called her “sister” instead of wife. The king, who was SO good at making spousal-type decisions, decided a child bride would be a good idea and married Anne Boleyn’s cousin, Katherine Howard (Samantha Pauly — I saw understudy Courtney Mack). Plagued by gout, obesity and probably a host of other illnesses, Henry wasn’t exactly in prime baby-making condition, but he still expected a spare male heir from young Katherine. She turned to some younger male friends to help seal the deal, but the plan backfired when she was caught cheating.  So long, Katherine (beheaded). Finally, Henry chose mature, pious Catherine Parr (Anna Uzele) for his sixth queen. About five years later, he died. She was the only one who survived. The cast also includes Keirsten Nicole Hodgens and Nicole Kyoung-Mi Lambert.

In such a tragic story, Marlow and Moss find lots of humor. And they manage to modernize women from the 16th century to create an exciting energizing show that appeals to young audience members (there were lots at the Brooks Atkinson the night I attended) with color-blind casting  for those wanting to see persons of color, rather than historically accurate portrayals on stage. Carrie-Anne Ingrouille’s choreography is energetic and hasn’t lost any of its oomph with alterations made with Covid safety in mind. Costumes by Gabreiella Slade are bright and brilliant; the set (Emma Bailey, design) is simple and houses the all-female band, the “Ladies in Waiting.” Tim Deiling’s lighting design competes the set for the reality-show concert theme, which thankfully isn’t overdone.

The pop music is loud, percussion-driven and fun. I bought the soundtrack after seeing and loving the show in March of 2020 and it’s a favorite (Catherine Parr’s solo “I Don’t Need Your Love” is the weakest, as though after pounding out so many great tunes, the songwriters just didn’t have enough energy to come up with one more.) Most of the others are catchy and will have you humming them long after you leave the theater.

Getting the soundtrack in advance isn’t a bad idea. The lyrics are quite clever and vital to the storytelling, but the sound on stage (Paul Gatehouse) doesn’t always pick them up and if you don’t know Henry’s story or all the words to the songs, you could feel like you are missing something in this fast-paced 80 minutes with no intermission.  The score features orchestrations by Tom Curran with music supervision and vocal arrangements by Joe Beighton and US Music Supervision by Roberta Duchak.

SIX is currently on-stage at the Lyric Theatre in London’s West End and on a UK tour. The show will also launch the US National Tour with a return engagement in Chicago where the show will run at the CIBC Theatre in 2022.