October 7, 2021: The number of shows, films, and TV series inspired by the marital maelstroms of British monarchs is legion. For sheer numbers, none, however, not even the recent outpourings about Princess Diana and her death by paparazzi, can compete with the sixteenth-century tale of King Henry VIII and his six wives. For starters, take a peek at this list of film and TV versions. 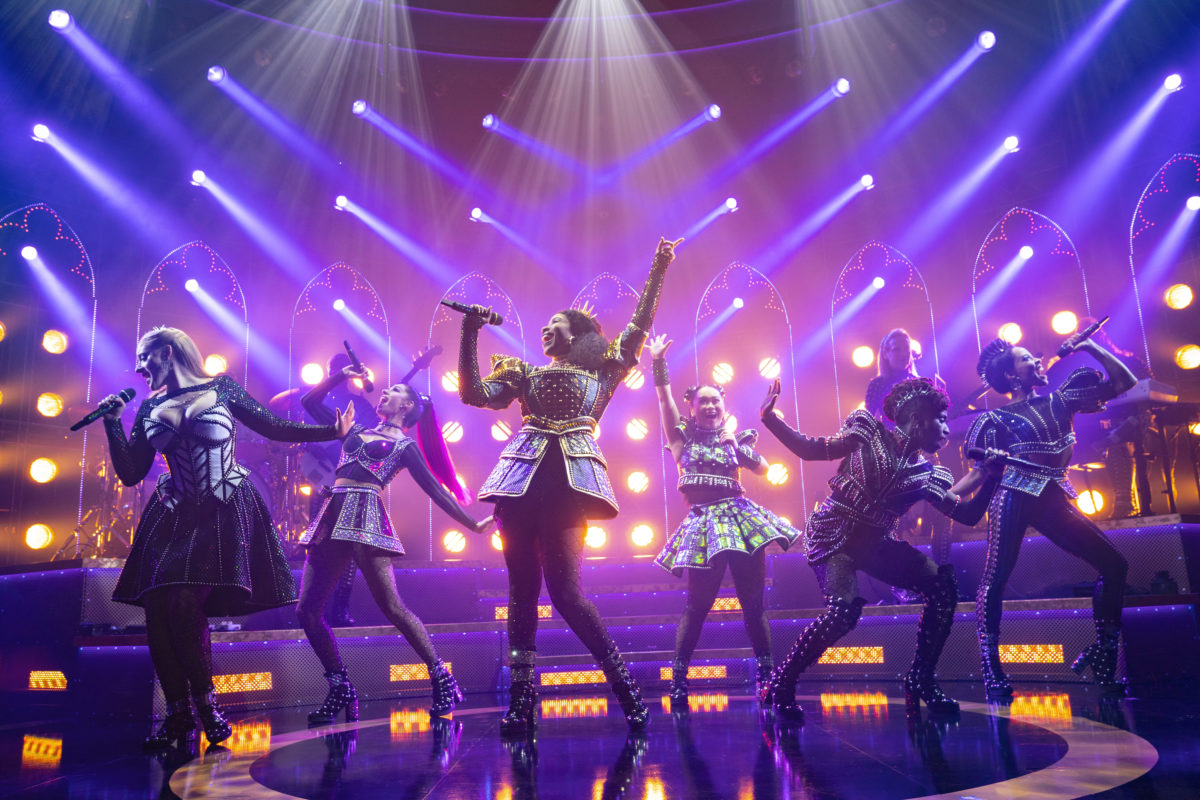 October 7, 2021: The number of shows, films, and TV series inspired by the marital maelstroms of British monarchs is legion. For sheer numbers, none, however, not even the recent outpourings about Princess Diana and her death by paparazzi, can compete with the sixteenth-century tale of King Henry VIII and his six wives. For starters, take a peek at this list of film and TV versions.

Broadway musicals, of course, haven’t been immune to Henry’s amorous appetites. Composer Richard Rodgers and lyricist Sheldon Harnick, both legendary artists, learned that to their dismay when the critics decapitated their 1976 Rex, whose head rolled after only fourteen performances. Happily for the box office, though, it looks like Six: The Musical, the latest tableau of Tudor troubles, will keep its head on indefinitely, although even this slickly entertaining, historically shallow rock musical can’t change what happened to Anne Boleyn and Katherine Howard.

Written and composed by Toby Marlow and Lucy Moss, Six began its journey with Cambridge University’s Musical Theatre Society, moved to London’s West End in 2018, and was set to open on Broadway last year when the pandemic put the street on the chopping block. As dynamically directed by Ms. Moss and Jamie Armitage, with clockwork choreography by Carrie-Anne Ingrouille, it’s a high-energy, high-decibel work, telling its “herstory” through a team of six ethnically and otherwise diverse, hand-mic wielding, glitz-embossed actress-dancer-singers to represent each of Henry’s spouses. Ticking them off chronologically we have Catherine of Aragon (Brittney Mack), Anne Boleyn (Andrea Macasaet), Jane Seymour (Abby Mueller), Anna of Cleves (Brittney Mack), Katherine Howard (Courtney Mack, covering for Samantha Pauly when I visited), and Catherine Parr (Anna Uzele).

The premise: a (faux) contest in which the audience is told it will be asked to determine which of these unfortunate women suffered the most from her regal romp. Over the course of eighty uninterrupted minutes, each wife gets the spotlight to recount, in pop musical terms, the essence of her experience—summed up in the recurring lyric, “Divorced, Beheaded, Died, Divorced, Beheaded, Survived”—with her fellow wives serving as vocal and choreographic backup. Ultimately, Six is more a flashy concert than a conventional stage musical. You might say it’s a variation of the jukebox formula, tied together by a slender theme instead of familiar songs. You could almost call it a revue. Rodgers and Hammerstein it’s not.

Snarky wisecracks (lots of head jokes, of course), direct acknowledgement of the audience (including multiple shout outs to “New York”), sassy poses timed to percussion beats, coy double-entendre raunchiness, hip lingo, and feminist pizazz remind you not take the show seriously. If you want insight into the immense historical significance of Henry’s reign—most importantly, England’s break from Roman Catholicism when the Pope said nay to a divorce—wait for something like Wolf Hall or A Man for All Seasons.

Even accepting the show as a tongue-in-cheek spoof, it does sometimes feel that there’s a hollow at its core. Henry’s spouses gang up to outdo one another in complaining about their bridal fates, but the dastardly groom is nowhere to be found. Might not some sense of dramatic tension have been created by making him present to defend himself in a duet or two? His absence, and the subsequent dependence on our having to imagine him, makes him a straw man that weakens the sense of grievance and the implicit argument against the patriarchy using its power to dominate women.

Although the weighty issues surrounding Henry’s reign are sparingly alluded to, they remain peripheral to more personal concerns, giving the affair a sheen of glossy superficiality. Surprisingly, for a show that appears interested in empowering Henry’s victims, you never hear the name of his daughter, Elizabeth, one of the most powerful women in history. At the end, the women contrive a “histo-rewrite” to come out on top of their sad histories, but all it does is remind you that the best way to enjoy Six is to ignore the feminist politics and accept it as a theatrically diverting dive into divadom, with each wife reflective of some flashy pop icon.

To help, the Playbill has a section that actually tells you that the “queenspiration” for Catherine of Aragon was Beyoncé and Shakira, for Anne Boleyn Lily Allen and Avril Lavigne, for Jane Seymour Adele and Sia, for Anna of Cleves Nicki Minaj and Rihanna, for Katherine Howard Ariana Grande and Britney Spears, and for Catherine Parr Alicia Keys and Emilie Sandé. If you’re familiar with these stars, you’ll have as good an idea of the show’s musical styles and visual appeal as anything I could describe.

Marlow and Moss contribute nine extended numbers, each worthy of a listen, and, as my gym-rat daughter suggested, solid material for her workout playlist. Several may eventually get covers by major artists, if they haven’t already. The one most likely to do so, Jane Seymour’s “Heart of Stone,” a classic power ballad with lyrics not specifically tied to the narrative, immediately brought Adele to mind. So, much as my familiarity with today’s pop divas is perilously thin, I was happy to discover that superstar was one of the “queenspirations” mentioned above. Regardless, you’d need a heart of stone not to thrill to Abby Mueller’s soaring rendition.

Many critics have taken Six to their own hearts, and theatregoers hungry for Broadway’s (hopefully) post-pandemic revival are said to be shelling out queenly sums to share these ladies’ travails (divorces, adultery, miscarriages, executions, the list goes on). There are many features in Six that deserve grades of ten for talent and skill, most especially the sensational cast, each of whom gives a command performance. But somehow, when I do the math, Six’s grade still comes out a seven.

COVID-19 SAFETY PROTOCOL INFORMATION
Please note the following vaccination and mask requirements for all attendees:
MASKS REQUIRED: All guests must wear a properly fitting mask over the nose and mouth in the theatre
VACCINATIONS REQUIRED: All guests must be fully vaccinated to enter the theatre and must present digital or physical proof at the door.
Children under 12 and people with a medical condition or closely held religious belief that prevents vaccination may show proof of a negative COVID-19 test.
PHOTO ID: Guests ages 18 and older must present a valid government-issued photo ID. Guests under 18 may also show a school photo ID. Guests under 12 must be accompanied by an adult who meets the above requirements.
Guests who do not comply with these policies will be denied entry or asked to leave the theatre.