July 29, 2022: “Au fond,” as Mary Rodgers might say, she was about as shy as Princess Winifred= NOT. (Once Upon a Mattress) Daughter of musical theater legend Richard Rodgers, the accomplished artist was a musical theater composer and writer of everything from dialogue for Bill Baird marionettes to Leonard Bernstein’s Young People’s Concerts to hugely popular children’s books (some turned into movies). 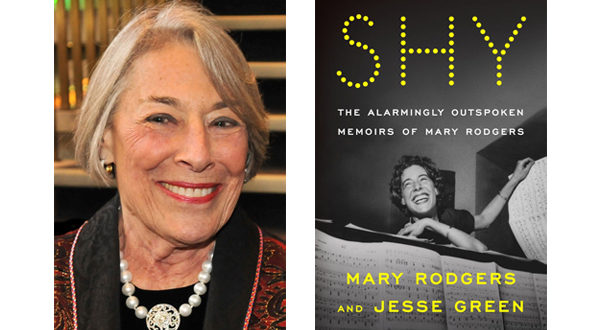 July 29, 2022: “Au fond,” as Mary Rodgers might say, she was about as shy as Princess Winifred= NOT. (Once Upon a Mattress) Daughter of musical theater legend Richard Rodgers, the accomplished artist was a musical theater composer and writer of everything from dialogue for Bill Baird marionettes to Leonard Bernstein’s Young People’s Concerts to hugely popular children’s books (some turned into movies).

Mary was quick, wry, mischievous, sexually liberated, romantic, capable, generous, modest, an admitted pill-popper; a wife (twice, once to a gay man); mother (six times); and, eminently the kind of person whose company and friendship you’d value most highly.

Her tyrannical “Mummy” Dorothy, was “…driven mad by the things I did that she wouldn’t have done the same way,” strict, tasteful, proud, and forbearing of genius/provider, Richard Rodgers as he slept his way through a multitude of actresses, chorines and secretaries. (Mary calls her equally distant Daddy “Dionysian”.) “We love you, but we don’t like you,” she was told when old enough to understand. With the occasion of her first musical, she finally mustered the courage to play a song for the great Rodgers. His response, “Why did you do that in the bridge? I wouldn’t have done that” made her resolve never to play him her music again.

Because Dorothy hated Wesllesley, Mary attended the college. Encountering girls who had “never seen either a musical or a Jew,” she also hated it. While she was there, best friend Stephen Sondheim studied with Milton Babbitt “passing on everything he thought I’d understand. I guess I absorbed some of it.” She unabashedly admits Sondheim was the love of her life. Her friendship with him during childhood deepened as years passed. (They met at “Okie”/Oscar Hammerstein’s house, likely commiserating about similarly strained home lives.)

A Christmas greeting from Sondheim. The handwritten melody is from “The Two of You”..”Every day I think anew of you/How I love the two of you.”

“I liked gay men. Everyone should marry a gay man at least once. They’re warmer, more accessible, and more emotional,” she says. Mary and Sondheim slept together (sex is implied at least once) and even contemplated marrying. Their bond included his honest critical support and her helpful camp following. It was she to whom he would turn when, writing Company, Sondheim needed experiential thoughts on the nature of marriage. Mary’s first husband Julian B. Beaty, Jr. would be gay, though in the closet when they courted. He fathered much desired children (words on motherhood might be those of Jean Kerr – Please Don’t Eat the Daisies), but was “finicky, controlling, puritanical, elusive- my mother!”

At 18, she had a date with Harold Prince. “I weighed 165 pounds and wore a size 20. (She later became and stayed svelte.) Not only that, but I was wearing a brown wool suit chosen by my mother. I looked like a Fudgsicle.” She and Prince later considered marriage, but mutually agreed to lifelong friendship. Still a virgin just wanting to “START,” she allowed herself to be deflowered by an actor while apprenticing at Westport Playhouse. The author readily moves on to more important things. “It wasn’t twenty minutes before I thought, this is what I love. These are the people I want to spend my life with…imagination, iconoclasm, fearlessness, a gift for fun-and no snobbery.” A good description of Mary herself.

Professional opportunity first showed its hand at the Pocono resort (Camp) Tamiment. Taking advantage of an unexpected gap in playhouse scheduling, Mary and Marshall Barer had three weeks to write what became Once Upon a Mattress, based on Hans Christian Andersen’s The Princess and the Pea. The caveat was the musical had to contain big numbers for all nine contract players. Cart before the horse, songs were custom tailored with plot woven through. “Do not seek to know how musical sausage is made,” she reflected. One can almost hear her laugh.

The collaborators were surprised and delighted when Mattress found New York producers. An expanded version played Off then on Broadway. Here she came up against the imperious George Abbott. Mary and Barer wanted the  unknown Carol Burnett to play Princess Winifred. Abbott thought her too attractive. A little trickery convinced the director to accept the actress. After that, Mary was asked to write a number of children’s songs. At 26, divorced with three children, income was paramount.

1959: Mary, with Joe Bova singing and Dean Fuller watching, perform the new Mattress score for George Abbot. “I said I’d direct this show and I will. But I won’t like it.”

An ill-fated musical called The Happy Medium followed. Two among its songs were called “A Little Night Music” and “A Good Thing Going.” The first became the title of a Sondheim musical, the second the title of a song from his Merrily We Roll Along. Mary was fine with it, Barer not so much. Like many of her peers, she began to frequent “Dr. Feelgood” who dispensed “miracle tissue re-generators comprised of amphetamines, vitamins, painkillers, and human placenta.” She’s as candid about drugs as she is about sex. Around then, she met and married Hank Guettel with whom she had several more children. (One is noted musical theater writer Adam Guettel.) We hear about Hank – actor, director, administrator and a good match.

“I didn’t expect to be my father – who could? I never dreamed of equaling Steve. I wasn’t jealous or envious of Adam’s talent as it emerged- how could I be? It was enough, with all of them, to have had a front-row seat…Larry Hart spoiled me for genius, which is why my life ever since has been a joyous talent search. I collect the way some people collect paintings.”

Circa 1972: Mary and Dorothy. “She had an orderly life with no children underfoot; I was basically Mother Hubbard.”

Mary was approached about authoring a children’s book. “Badness was the thing I enjoyed thinking about most as a kid, and even an adult.” She wrote The Rotten Book which set her on a successful, ancillary career path. Freaky Friday, based on Thorne Smith’s Turnabout (switching bodies with humorous results) would spawn two sequels, several films and a television movie. She even agreed to co-author A Word to Wiveswith Dorothy Rodgers, though later embarrassed about expressed opinions. When asked in adulthood what she missed growing up, it was her mother not her father with whom Mary longed for a relationship. She was a director of the Rodgers and Hammerstein Organization, a board member of ASCAP, and served for several years as chairman of the Julliard School where there’s “a water fountain or something” named for her.

2010: In Quogue, among the Quoglodytes

Along the way, there are a great many recognizable names, a varied career, the loss of a child, husband, and parents, but this is Mary’s story. Fortunately Jesse Green was there for many years to draw her out, organize, footnote, fact check and fully chronicle her death. The book is warm and fun. A grand read.