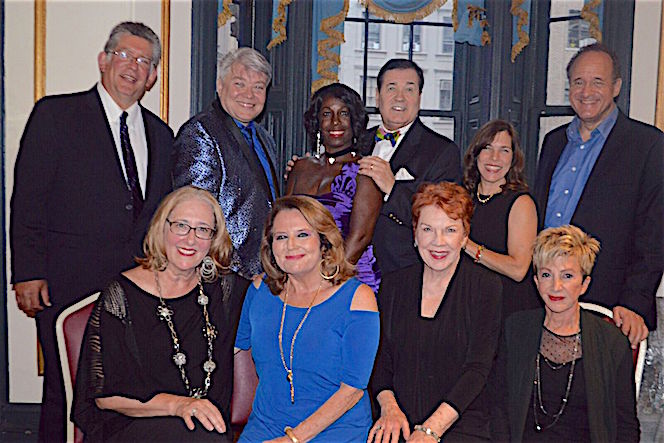 Singing showstopper songs from the Broadway Songbook from iconic shows like “42nd Street,” “City of Angels” and “Sweeney Todd,” and “Beauty and the Beast,” the Broadway stars Beth Fowler, Lee Roy Reams, and Adam Grupper set the water mark high.  The actress and singer Barbara Minkus, who broke out several decades ago as the original Lucy in “You’re a Good Man Charlie Brown” and was a frequent talk show presence (The Merv Griffin Show) raised the level even higher.  The raconteur and producer Richard Skipper, was a font of good cheer and stirred things up with the audience, and the up-and-comers Susan Vardy (a former busy ingénue who left the business to raise a family), and blues and R&B sensation Kathleen Waters (new castmember on Orange Is the New Black) both held nothing back.  Paul Chamlin was the evening’s music director on piano.  Douglas Ramirez — the East Coast director of special events for The Actors Fund — was on hand to enjoy the evening.

Celebrated for their mix of humor and high-octane singing, Levine-Miller’s “Showstopper Divas” and “Divos” concerts have been a staple of the New York charity nightclub scene for years.  In addition to hosting and producing the Showstopper concerts, Levine-Miller produces (with Thethreetomatoes.com’s Cheryl Benton) the Tomatoes Got Talent singing competition for women over 40, and is the host of the monthly Randie’s Roundtable Showfolks Luncheons at Sardi’s.

Among Reams credits are “42nd Street” (Tony nomination); “The Producers;” and “Hello Dolly!” Fowler has “The Boy from Oz” with Hugh Jackman (Tony nomination), and “Sweeney Todd” as Mrs. Lovett (Tony nomination) to her credit, as well as the original Mrs. Potts in “Beauty and the Beast,” plus TV’s Orange is the New Black.  Grupper is a veteran of 11 Broadway shows, most recently “Fiddler on the Roof” where he played the Rabbi and went on as Tevye 42 times. Minkus (Molly Picon in “Picon Pie”) is planning to bring her L.A. premiered one-woman show “I’m Not Famous” to New York.

A respected clinical psychologist Vardy toured in “Hello Dolly!” 25 years ago and was directed by Lee Roy Reams!  She was the winner of the Tomatoes Got Talent competition in 2015. Waters was the winner in 2016.

Randie Levine-Miller’s “Showstopper Divas/Divos,” the double-barreled evening blending gals and guys, performed at The Triad, 158 West 72nd Street, on Monday September 18, at 7pm.  A portion of the evening’s proceeds went to The Actors Fund to support their vital social services work for those who work in the entertainment industry.  For more info visit www.triadnyc.com