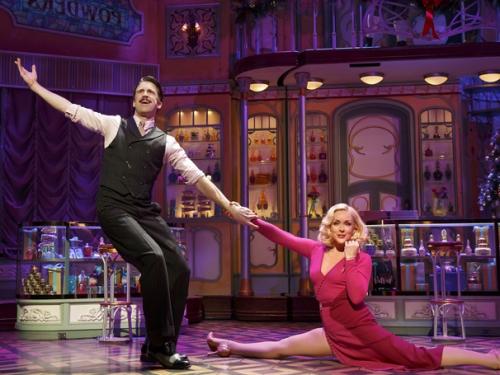 Written at the tail end of the Golden Age of Broadway Musicals, this intimate, innocent romance lacked overblown pizzazz—there wasn’t even the traditional huge chorus—and had a relatively brief run in 1963. But the enchanting score by Jerry Bock and Sheldon Harnick (who are also represented this season with a powerful production of Fiddler on the Roof) lived on in a cast album featuring the immortal voice of Barbara Cook. Bock’s music wisely employed the story’s Hungarian setting without borrowing too heavily from that country’s tradition, while Harnick’s deceptively clever but straightforward lyrics were simultaneously specific enough to advance the plot and general enough not to require an intimate knowledge of same.

The show remained a cult item for 30 years until Roundabout delivered the first Broadway revival in 1993, a gorgeous candy box of a show staged with love by Scott Ellis. Now Ellis has returned to the material with an equally enchanting but totally different staging. Joe Masteroff’s slightly screwball-ish but cute book still enchants. After all the original play, Parfumerie from 1937, about two bickering clerks who are romantic pen pals without knowing it, also provided the template for such cherished film comedies as The Shop Around the Corner, In the Good Old Summertime, and You’ve Got Mail. Set designer David Rockwell has created a Faberge Egg-world of old time Budapest.

But the strength of this production is in its perfect casting. As the dreamy shopgirl Amalia, Laura Benanti impresses with her considerable vocal skills and flawless comic timing. Zachary Levi displays the perfect blend of manly charm and humorous self-deprecation as her unknown admirer Georg. Jane Krakowski takes the supporting role of the unlucky-in-love, slightly daffy Ilona and turns her into a three-dimensional figure, albeit one who does splits and runs through sprayed perfume to catch the scent.

Gavin Creel oozes oily charisma as the rogue Kolday while Michael McGrath perfectly embodies the lovable but obsequious Sipos, Georg’s confidante.  Byron Jennings provides bite and backbone as Maraczek, the officious but ultimately unravelling owner of the shop. Nicholas Barasch is fresh-faced and appealing as the delivery boy Arpad.   Peter Bartlett in the tiny role of a put-upon headwaiter delivers a comic gem of a performance and Michael Fatica is deliriously clumsy as his klutzy busboy. Even the small roles are sources of joy in this lovely and loving She Loves Me.

Originally Published on March 30, 2016 in ArtsinNY.com