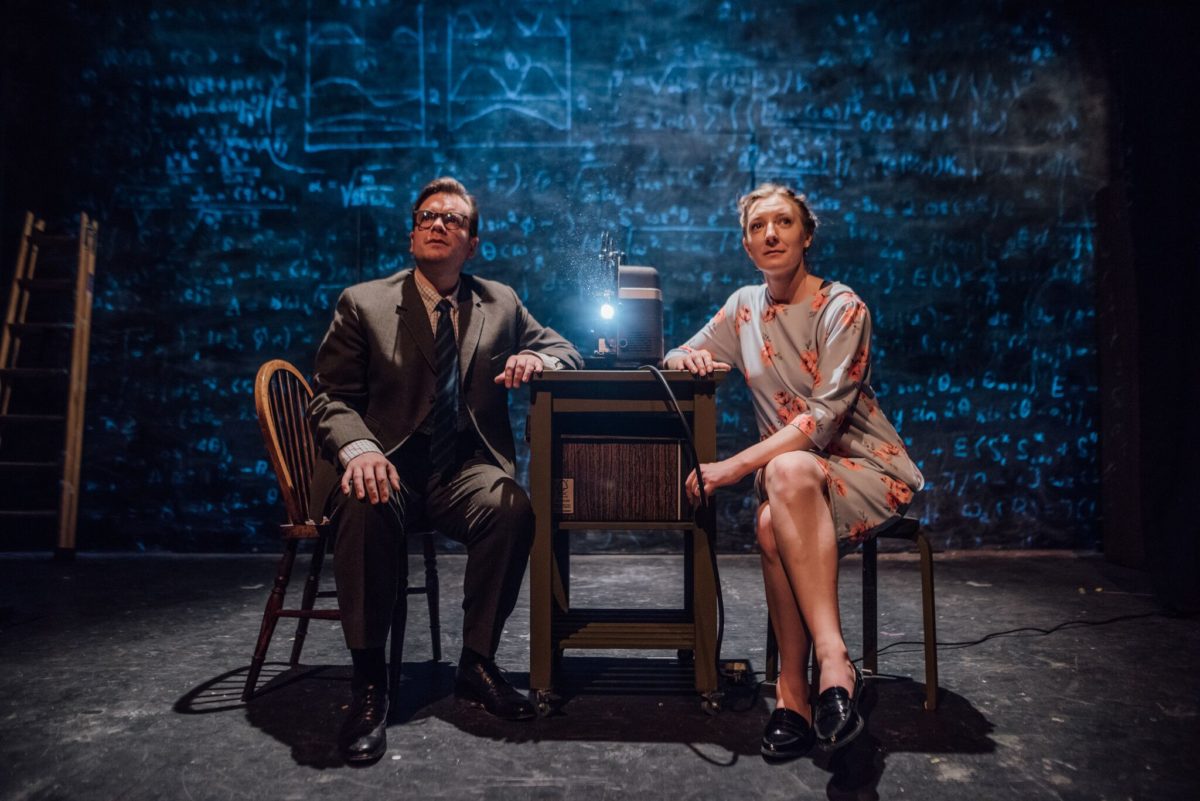 Now that I’ve seen Secret Life of Humans, a play about Bronowski by David Byrne, part of the current Brits Off Broadway 2018 season at 59E59 Theaters, I think I’m ready to plunge into Bronowski’s 448-page history of science, which its publicity blurb says “traces the development of science as an expression of the special gifts that characterize man and that have made him unique among animal species.” Also going on my reading list is Yuval Harari’s Sapiens: A Brief History of Mankind, written in Hebrew and published in English in 2014, which is actually the direct inspiration for the play.

Created by the New Diorama Theatre, which specializes in devised theatre, this cross between a biodrama and a lecture on what it is to be human introduces highlights in the life and thoughts of Bronowski, a Polish-born Jew whose family had immigrated to England. Known for his encyclopedic knowledge, he became a public intellectual, recognized not only for his writing but for his radio broadcasts, reaching international fame with his “Ascent of Man” TV series. A friendly, self-deprecating man, he liked to say, “Call me Bruno. Everybody does.” Right after he was interviewed on TV in 1974 by Michael Parkinson, clips of which appear in the play, he passed away, aged 66.

Byrne (who co-directed with Kate Stanley) presents Bronowski (Richard Delaney, charmingly erudite) in a mix of fictional and history-based flashbacks set within the framework of her last lecture about Bronowski’s ideas by a young, recently dismissed anthropology professor, Ava (Stella Taylor, determined and self-assured).

Ava gained access to Bronowski’s archives after going on a date with the scholar’s grandson, Jamie (Andrew Strafford-Baker, amusingly innocent). She not only knows more about the scholar than Jamie, she ends up sleeping with the  guy in the Bronowski family home, where he still lives and where Bronowski’s papers, film, tapes, and so forth remain in a locked, alarmed room Bronowski created in 1949. It’s an obviously artificial setup but works well enough as a narrative springboard while also revealing Ava’s very human ambition to deploy her academic skills on a worthy but potentially self-serving project.

Within the bookended lecture, the episodic narrative moves back and forth in time between the romantic snogging of Ava and Jamie, key moments in Bronowski’s life (including those with a onetime colleague, George [Andy McLeod]), and ghostly scenes involving not only Bronowski but his recently deceased wife, Rita (Olivia Hirst), who outlived him by 40 years.

Laughter arises at various places, the occasionally witty repartee balanced by Byrne and Stanley’s clever staging, in which Jen McGinley’s setting, consisting mainly of movable bookcases, are shifted by the ensemble into multiple configurations to represent different locales. At the rear, a blackboard-like wall, covered with hints of oft-erased equations serves as a screen for Zakk Hein’s projections.

Most memorable of the visual images are those when the blackboard becomes transparent to show one or two people, suspended by wires, walking across the rear stage wall, perpendicular to it, as if being seen by us from overhead. It’s thus we see, for example, how the oldest, fossilized, human footprints were created, as two people walk across, stop, look up, and then walk again, almost as if something falling from above ended their existence.

Nonetheless, the issues of what it is to be human, a species unto itself—there were once perhaps half-a-dozen (given the human proclivity for violence, one can guess why)—are balanced with the human interactions of the characters themselves. Although the ideas don’t dominate the evening as in more conventional discussion drama, they’re always expressed in clear, accessible terms.

When we’re not learning them from Ava, who talks about things like a vestigial tendon or our talent for mythmaking, we infer them from Bronowski’s experiences, particularly his secret wartime work figuring out how to create firebombs that could kill as many German civilians as possible. The discovery of this comes as a shock to Jamie when he discovers his idealized grandfather (who lost much of his family in the Holocaust) was involved in facilitating such horror. Given the slaughter the Germans wrought, which is, of course, mentioned in comparative terms, his revulsion seems a bit implausible. The cynical Ava, however, offers a more grounded reaction.

Even in view of the play’s circling around the subject of mass killing (Bronowski also reported, famously, on the aftermath of the atomic bombing of Hiroshima) and other manifestations of human cruelty, Bronowski maintains his optimistic claim that man’s progress is a positive one.

Secret Life of Humans is well-performed, generally engrossing, thoughtful, and humorous enough for its purposes. Still, when one looks at today’s world, with its nuclear proliferation, millions of displaced persons, failing immigration policies, civil and ethnic wars, school shootings, starvation, terrorism, religious and racial hatred, rising authoritarianism, and a United States in which perhaps 40 per cent worship Donald Trump, one might wonder whether The Descent of Man, the title of the Charles Darwin book that inspired Bronowski’s wasn’t closer to the truth.